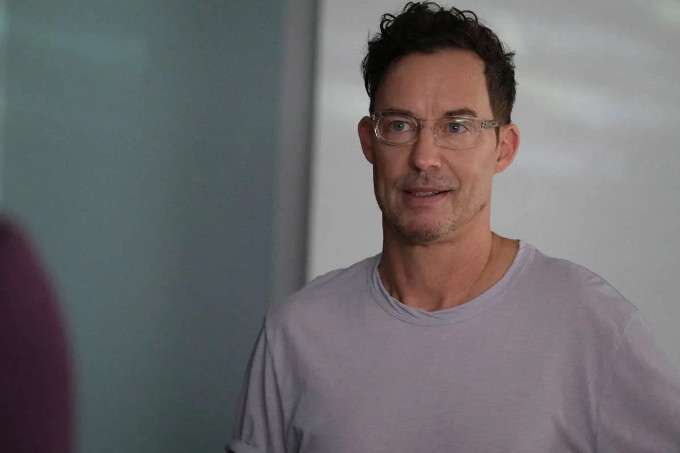 With Barry facing an unthinkable betrayal, he turns to the one person he thinks can help him fight the Speed Force itself. - HG "Timeless" Wells. Meanwhile, Cisco makes a bold confession to his girlfriend, as she and the rest of Team Citizen seek out the Speed Force under Iris' direction.

The Flash comics of Joshua Williamson (concept of Still, Strength and Sage Forces)

The script has Caitlin and Joe reacting like they knew Alexa Rivera, but they never spoke to her in the last episode. (A cut scene, perhaps?)

How can the Speed Force go on to kill Psych and Deon alone when, by her own admission, she needs Barry's power to fight the other Forces?

Iris (and the writers) seem to forget that the new Speed Force is not Nora Allen, no matter what body she takes on, and there's no real reason why the Speed Force would be attracted to Barry Allen's childhood home, much less for Psych to show up there.

Cisco's argument that Deon and Psyche should be allowed to be themselves falls flat given that they were both actively using their powers to hurt people, no matter how hard the script tries to push the idea that the Forces are Barry and Iris' unruly children and their hosts innocent victims.

The Still Force symbol from the comics has replaced the letter on Deon Owens' Letter Jacket.

This episode is said to take place 17 days after the events of 703.

The Speed Force says that the other Forces merged with people they chose to act as their avatars. This kind of connection is described as unnatural and corrupting, not like the connection Barry has to The Speed Force.

A cluster of kinetic energy readings from the night The Flash fought Mirror Monarch confirms the other Forces were born at the same time as the Speed Force.

Cisco creates an isotopic scanning lens capable of detecting the energy signatures of the four Forces.

The new forces are made of Elemental Force Particles. Barry theorizes that with a sample of these particles taken from the lighting bolt that manifest when they recreated the Speed Force, they'll be able to make an electromagnetic pulse that seeks out those same particles and erase them from existence, wherever they are on the temporal spectrum.

To gather the Elemental Force Particles, the Tachyon Enhancer is modified to siphon these particles instead of the dark matter photons Barry gathered in 702.

Since Timeless Wells was present for the creation of the Forces, he can be used as a beacon for his other self to lock onto. Once that is done, he can create a time-bubble from that moment until 17 days later, preventing anything from changing the timeline.

The proton collection housing of the Tachyon Enhancer must be double-fused.

Iris: Psych, stop. You’re hurting them… please.
Psych: Oh, they’re hurting themselves. Sure, I pull back the curtain. But what they see is up to them. Now, before I show you your worst fear, why were you looking for me?
Iris: I wasn’t.
Psych: No… You’re looking for the Speed Force? Nora. Why? Why are you so desperate to find her? Is it to hurt her?
Iris: I want to talk to her so I can help her.
Psych: Are you sure? Because I am feeling the pain that she has inflicted upon you. How deeply she’s torn apart your relationships. Your whole life. Actually, the suffering she’s caused is quite beautiful.
Iris: That wasn’t Nora. She’s lost control. Just like you have. But if you let me, I can help you both.
Psych: (chuckling) I don’t need your help. Besides, I can feel what you fear the most. It’s the person you seek. Well, your wish is my command.

Alexa Rivera is confirmed to be dead.

The Speed Force says that Alexa was the strongest of the three Forces.

The Speed Force reveals that the Strength, Still and Sage Forces were created when she was reborn in 703.

Kamilla tells Cisco that her photos from the Mirror Monarch attacks got accepted at a gallery in San Francisco and she's thinking of moving there.

Cisco gives Kamilla a new lens for her camera that allows her to scan for signatures from the four Forces.

Barry wants to go back in time to stop the other Forces from being created.

Iris wants to find the Speed Force, which she still calls Nora, and convince it that it does not need to kill the other Forces. She references Barry's reasoning with Mirror Monarch and the fight with Abra Kadabra in 704.

Kamilla's lens detects a glowing spot of kinetic energy at the center of Iris' body. This leads them to theorize that Iris is connected to the four Forces and can be used as a divining rod to track down the Speed Force, as she glows brighter when moving in certain directions.

Cisco, Barry and Chester come up with a way to gather the other Force Particles and destroy them, but are still unable to think of a way to do this without creating a paradox.

Barry travels back in time to the year 2000 and retrieves Timeless Wells from his beach house in Starling City, where he is getting ready to watch The West Wing with his wife, Tess.

Wells comes up with a way to use his powers to nullify the paradox.

After searching the city and getting continual energy readings for the Speed Force, Iris suggests they instead go where Nora Allen would go and head to Barry's childhood home.

Chester hides the collection disk for the tachyon enhancer when Deon Owens materializes in STAR Labs.

Deon says he was drawn to STAR Labs at that moment for some reason.

Deon recognizes Cisco and Chester from 706 but has no idea who Wells or Barry are.

Deon freezes time but this does not affect Barry at first.

Deon destroys the Tachyon Enhancer, aging the harness a thousand years in an instant. However, with Chester having hidden the collection disk, they can still use it with some minor repairs.

Cisco says he thinks Deon is right and they can't just unmake the Forces. He admits the Forces are a danger, but unmaking them can't be the answer.

Cisco walks out rather than help Barry with his plan.  Chester and Timeless Wells stay.

Barry talks with Joe, who tells him about the troubles he had with bringing Wally West into his life and how you can't judge your children for who tey are now - you can only lead with love and help them find who they can be when they grow up.

Kamilla's worst fear appears to be a flashback to escaping Bloodwork's zombies in 608.

Iris worst fear is failing to live up to the standard Nora Allen set for Barry when he was a kid.

Barry and Timeless Wells travel back to the creation of the new Speed Force and are seen by the previous version of Wells, who takes off his glasses in acknowledgment.

Iris resists Psych's manipulation and once again offers to help free the person he was of the Sage Force. Psych rejects her help, saying he likes his powers and hated his parents.

Team Citizen is saved as Barry begins killing off the Sage Force in the past.

Deon Owens is shown to be suffering where he is at that same moment.

Alexa Rivera comes back to life for a moment in Caitlin's lab before seemingly dying again.

Barry suddenly changes his mind about destroying the Forces, after thinking on what Joe told him.

Iris tells Barry about her encounter with Psych and says he was right to think they couldn't reason with the Forces.

Barry tells Iris she was right and the only reason he didn't destroy the Forces was because of what she, Joe and Cisco had said and because he felt the Forces had a role to play in the future.

Barry says that he somehow felt that some of their family in the future would grow up to access the Forces and use them to help people as superheroes in the future.

Caitlin tells Barry and Iris about Alexa seemingly coming back to life.

Barry and Iris are able to use their connection to the Strength force to resurrect Alexa.

Timeless Wells says goodbye to Cisco again and tells him that as much as the various Wells may have taught him, Cisco taught the Wells as well.

Cisco and Kamilla both say they want to leave Central City together.

The episode ends with The Speed Force confronting Deon Owens.

The revelation that "strong independent woman" Iris West's worst fear is not being a good wife and mother and not being able to live up to Nora Allen's example for Barry is idiotic, even in the eyes of those who don't like Iris' character. (It also highlights how illogical it is that, between the two of them, it is Barry who has issues with getting too close to his Speed Force "mom" and not Iris.)

An illogical and badly written piece of filler that will go down in history as one of the worst episodes of The Flash ever.
Posted by Starman at 10:31 AM