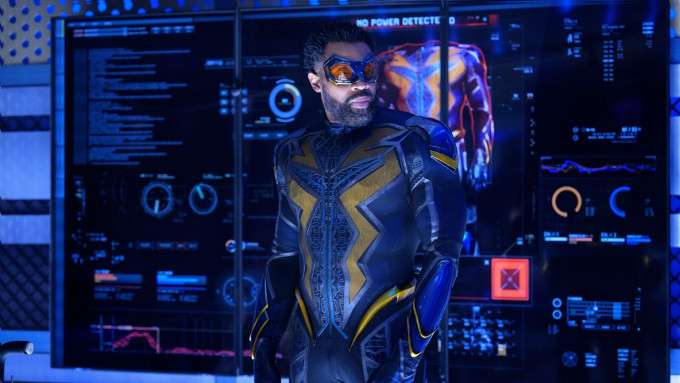 With Tobias Whale having won the mayoral election by default and Lynn's lawyer suggesting a plea deal, Jefferson becomes more desperate than ever to find a way to take the fight to his archenemy. Luckily, Khalil has a lead on another old enemy who is on Tobias' payroll, but how far will Jefferson go to save the woman he loves from prison? Meanwhile, Tobias turns his attention to the new Lightning and the connection between Jennifer Pierce and JJ Stewart.

The use of colored light and the set design for the Painkiller/Looker fight is fantastic.

Lynn is able to develop a serum that can extract the silver element from anyone Looker controls.

A half-dose of Painkiller's venom can neutralize a metahuman's powers, leaving them alive but powerless.

Detective Shakur: Why should I trust you, let alone help you?
Jefferson: Because now you know everything. All my cards are on the table. Look, Henderson said I could trust you. I'm trusting you with my life. Ball's in your court, man.

Lightning attacks one of the courier shipments picking up the metagene samples from The Center for Gene Therapy and Genetic Research.

Lightning is caught on camera retrieving the gene samples.

Tobias orders a DNA scan to be run on the woman in the Lightning costume.

Jefferson and Gambi have a drink in public before Jefferson is due to meet with Lynn and her lawyer.

Keith Michaels says he thinks he can work out a reasonable plea deal that will see Lynn serving the bare minimum of jail time. Jefferson says that isn't acceptable, but Keith pointedly reminds him that he is Lynn's ex-husband, so he has no say.

Lynn tells both of them to cool it and says she will decide whether or not to accept the plea deal on her own.

Tobias wins the mayoral election by default after his opponent, Councilman Holland, suddenly drops out of the race.

Chief Lopez meets with Tobias and asks for more next-generation DEGs. Instead, Tobias offers her meta-boosters and bracelets, telling her about his forcefield that depowers all the metahumans in Freeland except for the ones he has working for him.

Tobias gets the results of his DNA scan on the new Lightning and confirms that it matches Jennifer Pierce's DNA.

Anissa tells Lynn and Jefferson about her investigation into Tobias' metagene theft and gives them the frozen DNA sample container.

TC tells Jefferson that he's been in contact with Khalil and that he has some information for him.

Khalil tells Jefferson about the secret ledger he retrieved in 410 and how Tobias has a lot of people on his payroll, including cops, lawyers, judges, public figures and barbers. He also mentions the mystery woman who was being paid 10 times more than anyone else, but who has no digital footprint. The only information he has on her is a codename: Looker.

Jefferson tells Khalil about Looker and how she apparently escaped ASA custody sometime during the Markovian War.

Khalil offers to go after Looker for Jefferson and bring her to justice, since there is an address for her in the secret ledger.

Khalil says he intends to come home to Freeland after he finally gets Painkiller's order to kill the Pierce family out of his head. He asks after Jennifer, but Jefferson and TC don't tell him about how her appearance has changed.

Jefferson tells Lynn what Khalil told him and how he thinks Looker was responsible for framing them both. He suspects one of the people being controlled ins Special Agent Kevin Mason, but he's going to need help to prove it.

Jefferson decides to approach Detective Shakur about his plan.

Something is still off with Jennifer's powers, which leaves her feeling like a drained battery.

TC was able to hack Uriah's social media account and determine that it was the police who set up the ambush for Lightning in 409.

TC also sets Uriah up with a date with JJ later that night.

Jefferson tells Detective Shakur about Looker and his belief that she is mind-controlling Special Agent Kevin Mason. Shakur is skeptical but says he will think about helping him, but he has another appointment that night.

Shakur is not happy about being manipulated but ultimately relents with Jefferson points out that he is trusting him with his secret identity and his life now.

Detective Shakur sets up a meeting between himself, Jefferson and Special Agent Mason and arranges for three cups of coffee to be set aside for them. Jefferson slips the anti-Looker serum into Mason's cup.

Mason has an immediate reaction to the coffee and the silver element tries to escape after Looker speaks through him and he vomits up the element. Jefferson is able to catch it.

Mason confirms that he was being mind-controlled by Looker and says he is going to do what he can to help clear Jefferson and Lynn's names on his end.

Lauren meets with Gambi again. He once again apologizes, tells her about Tobias Whale being a crook and explains how he's been trying to work out a way to track down the energy emitter.

Anissa speaks with Lauren and while not revealing the whole truth of their work together or that she's a superhero, he shows Lauren her research that Monovista is stealing the metagenes out of young mothers.

Lauren agrees to help Gambi with finding the emitter, but not to help him - only to figure out who is stealing from her employee and got them involved in some shady business.

Red attacks JJ and Uriah and Uriah is shot in the crossfire. Red says that everyone she cares about will die if she doesn't quit being Lightning.

Uriah dies after telling JJ to keep fighting to make the world a better place.

Khalil confronts Looker in a mental battle, where he and Painkiller gang up on the psychic vampire.

Khalil doses Looker with a half-dose of his venom, telling her she won't get the rest of his antidote until she confesses to everything she did to help Tobias Whale frame the Pierces.

Gambi and Lauren discover that there are veins of Promethium buried around the Freeland tunnels, making it all but impossible for them to find the emitter by tracking its energy signature.

Jefferson tells Lynn that Detective Hassan is en route to arrest Looker and Agent Mason is working with them.

Jefferson proposes to Lynn again but she wants to throw a proper wedding for Anissa and Grace before she thinks of remarrying herself. She does, however, agree to "celebrate" with Jefferson that night.

Tobias recognizes Khalil from the security footage of his attack on Jesse Gentilucci's office.

Tobias calls Ishmael and tells him that there are some loose ends that need tidying up.

An unnamed location outside of Freeland, where Looker is hiding out.

Looker escaped from ASA custody sometime during the War with Markovia.

Uriah is killed purely to give Jennifer more angst ad dies because of her waning powers.

An oddly flat episode, despite everything that takes place during it. Uriah's death is just gratuitous and the reiintroduction of Looker seems like a bit much, despite her fight with Khalil and Painkiller being the visual highpoint of the episode. Jefferson coming to an accord with Detective Shakur also feels like it should have come earlier in the season. All in all it isn't bad, but it does seem very thrown together and none of the dialogue really sings.
Posted by Starman at 4:57 PM