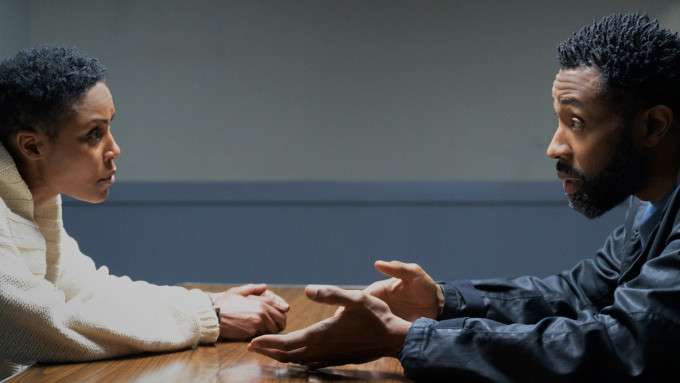 Lynn finds herself in serious legal trouble, as the rest of Freeland's heroes find themselves suddenly powerless. As Gambi struggles to figure out what is going on, Jennifer takes drastic action to kickstart her powers and a new barrier threatens Lynn and Jefferson's marriage.

Daredevil: Born Again (a crime boss villain tries to destroy the reputation of a superhero) and Predator (Jefferson's fight with Ishmael using his suit's stealth mode).

Cress Williams does a great job of conveying Jefferson's annoyance with every little thing in this episode without descending into outright anger, indicating how well he is maintaining his calm even as it is suggested he is on the edge of losing his cool.

The fight between Black Lightning and Ishmael is one of the show's best, even ignoring the use of special effects to let Jefferson "stealth."

Jefferson's costume has a stealth mode which he triggers using his powers. Gambi also has the ability to activate the stealth mode remotely.

Jefferson and Jennifer activate their powers to materialize and dematerialize their suits. Gambi has a prototype of the module that allows them to do this, which allows him to trigger the effect remotely. This gets Jennifer and Jefferson out of their costumes now that they are powerless.

Gambi installed the forcefield which saved Jennifer from falling to death after Jefferson nearly died entering the ionosphere in 405. Presumably Jefferson's costume has the same failsafe.

Tobias' followers have bracelets that render them immune to the effects of the energy emitter.

According to the data Dr. Darius Morgan recovered, none of the women Monovista was treating for cystic fibrosis actually had the condition. All of them did have the metagene and that this was harvesting them for some other purpose.

Jennifer: We need to get our powers back. They were the only real tie I had left to my identity. If I can't be Lightning anymore, who am I?
Anissa: Look, whether you have your powers, or you look different or not, you are my sister. And that, I know in my soul. So just hold on to that, okay? Until Gambi can... figure out a way for this all to go back to normal.
Jennifer: You know damn well this family doesn't do "normal."
(Anissa laughs at that.)
Grace: She's not wrong about that.

Tobias: "If a man shall begin with certainties, he shall end in doubts. But if he will be content to begin with doubts, he shall end in certainties." I wanna see this thing in action.
(Tobias draws a gun and fires at Red, who grins as he stops the bullet with his magnetic powers.)
Tobias: (chuckling) Cool. Now remove the bracelet.
(Red does so but looks a bit nervous as Tobias aims at him and fires, breaking a vase just behind him.)
Tobias: (chuckling) I wasn't gonna actually shoot you, Red. Now that we have assurances that the emitter is working, time to initiate phase two of the plan.
(Red still looks nervous as he wordlessly puts the bracelet back on as Tobias walks past him. Tobias is still laughing to himself. He then stops and turns his head back toward Red.)
Tobias: Oh, and... you owe me a vase. That was Lalique.

(Jennifer has just recovered from electrocuting herself to reactivate her powers.)
Anissa: Oh, my God. If you would have died, I would have killed you!
Jennifer: Classic Anissa logic.

Lynn: Can we talk about what's bothering you? Is it Keith? Um, I know this must be uncomfortable for you.
Jefferson: No. It's not.
Lynn: Then why are you acting like this?
Jefferson: Like what?
Lynn: Ungrateful.
Jefferson: (standoffish) What do I have to be grateful for, Lynn? That, uh... you have no faith in me? You didn't think I could fix this? That right now, I don't have the power to protect you?

Lightning survives the fall when her powers fail thanks to a forcefield which stops her just before she hits the ground.

TC has to make contact with Lightning using one of Gambi's ear-pieces instead of his powers, like he usually does.

Jefferson gets Gambi to activate the stealth mode in his suit. This allows him to get the jump on Ishmael, but he still struggles to hold him down.

Detective Hassan Shakur arrives with a small team of police officers, but Jefferson tells them to run for it.

Anissa is saved from the car by Grace knocking her out of the car's path.

Anissa finds the flash drive Dr. Darius Morgan hid the stolen data on Monovista's cystic fibrosis cure in a hidden compartment underneath the stuffed and mounted body of his dog, Rusty, whom he mentioned in 402.

TC isn't a good enough hacker without his powers to decrypt the flash-drive Anissa found, but he says he knows someone who can help. This turns out to be Painkiller's ally Philky.

Detective Shakur calls Jefferson and informs him of Lynn's arrest.

Because of Jefferson's friendship with Bill Henderson, Detective Shakur is able to get him five minutes to talk to Lynn privately.

Lynn is being held on 14 charges of violation of civil rights and accusations that she experimented on children in a government black site. This could be a reference to her work with the Green Light babies held by the ASA in earlier seasons, which Tobias would be privy to.

Tobias put out an official statement distancing himself from Lynn and her clinic.

Keith Michaels, an old college friend of Lynn's who became a lawyer, has agreed to represent her.

This is the first time Jefferson met Keith Michaels, though he knows of him.

When Jefferson asks about paying Keith, Lynn says it's already been take care of. This implies that Keith is a rather famous lawyer and very expensive.

Jennifer stays the night with Grace and Anissa.

Jennifer is worried that she isn't really her anymore without her powers.

Tobias and Red test a bracelet that renders Red immune to the effects of the energy emitter.

Lynn's bail is posted at $3 million.

Jefferson discovers that Lynn used her one phone call to call Anissa and told her to contact Keith Michaels.

Jefferson discovers that Anissa is Keith Michael's fees using the drug money she stole from the 100 as Blackbird.

Philky tells TC he has a real gift for hacking and coding even without his powers.

Khalil has claustrophobia and starts to hyperventilate crawling through ducts.

Khalil is able to recover a digital ledger belonging to Tobias.

Keith Michaels is able to get Lynn released without bail. It turns out the judge on her case was trying to get a kid into the same college Keith and Lynn went to and Keith was able to work a deal.

It is revealed that Keith Michaels was more than a friend - he is Lynn's old boyfriend.

Keith Michaels still seems to have feelings for Lynn and seems about to say something before Jefferson shows up.

Jefferson is curt but polite to Keith, who goes a little overboard in offering to do anything he can to help Lynn.

Philky taught TC how to attach a tracer to an IP address.

TC tracks the files to The Center for Gene Therapy and Genetic Research. This implies that someone on the clinic, working for Tobias, was covering their tracks.

Tobias has a meeting with Destiny, where he threatens to turn her in to Chief Lopez if he isn't put in charge of the Kobra Cartel. He allows her to keep a 10% managers fee of her current earnings.

The Kobra Cartel is involved in money drops, illegal gambling and human trafficking.

Destiny tries to shoot Tobias, but Red stops the bullets.

Tobias reveals that he's also made Ishmael a better offer and brought him into his direct employ.

Lauren angrily returns the Go board that Gambi gave her in 406.

Lauren reveals that she knows Gambi stole Promethium from her lab and blames him for the energy emitter being stolen as well.

Gambi swears he is innocent of that theft and can explain why he had to steal Promethium.

The ledger Khalil stole contains payroll information of various people Tobias pays thousands of dollars to every month. He decides to investigate one particular woman, who gets $20,000 a month.

Jennifer tries to kickstart her powers by electrocuting herself. She knocks out the power in Anissa's apartment in the process, but it works.

With a spark of her power back, Jennifer decided to reenter the ionosphere to fully recharge.

Jefferson point-blank tells Lynn that she doesn't trust him to help her.

Gambi brings Jefferson and Lynn dinner and talks to them about how Tobias must be using Lynn's clinic to take away everyone's powers somehow.

Lynn realizes Tobias used her - that she wasn't testing Val to find a cure for ALS, but to find a way for Tobias to harness her nullifying powers.

Gambi realizes Tobias must have found a way to partner Lynn's research with the energy emitter he was working on to create a forcefield that could nullify superpowers.

Tobias meets, through a hologramatic interface, with a group referred to only as The Board.  This seems to be The Shadow Board, whom Lady Eve answered to.

Tobias shows the Board video of him testing the emitter with Red, proving that only his chosen few metahumans have power in Freeland.

The Shadow Board promise Tobias a place among them once he becomes Mayor of Freeland.

Grace likes the idea of not having powers and not being a superhero anymore.  Anissa says she can't give it up and doesn't want to live a regular life.

Jennifer flies into the ionosphere and starts drawing in power.

TC stops her after she gains more than enough.

Jennifer starts to disintegrate again but recovers. The energy she left behind, however, remains in the ionosphere.

Honestly, the "do we want to be superheroes or not?" conversation seems to be the sort of conversation Anissa and Grace should have had before getting married. Then again, the show has established that Anissa is sort of impulsive.

An oddly empty episode which doesn't accomplish much beyond giving Jefferson one more thing to angst over and one more reason to be annoyed with Lynn. It's also a little late to be giving Tobias a few more hats to wear in his efforts to take over Freeland at every level, but it's worth it to see more of Tobias being smarter than everyone else in the room.
Posted by Starman at 11:09 AM