Black Lightning Episode Guide: Season 4, Episode 5 - The Book of Ruin: Chapter One: Picking Up The Pieces 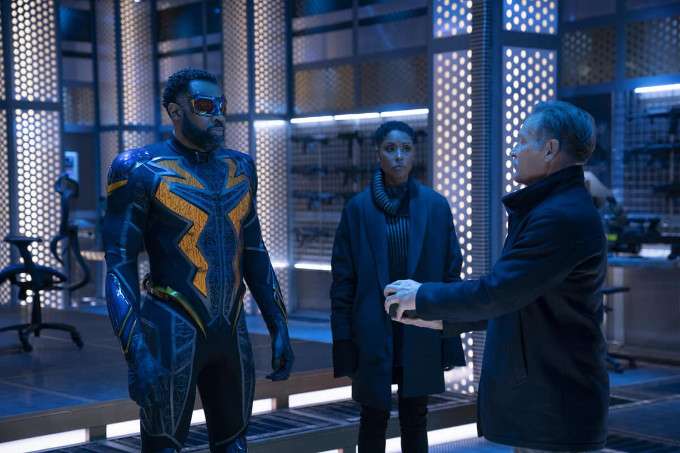 Plot
Chief Lopez declares war on Freeland's vigilantes and gangs, but the Pierce family have bigger concerns. Tensions run high and tempers flare as all the family secrets come out into the open and the life of Jennifer Pierce hangs in the balance. Meanwhile, Destiny proposes a truce between The 100 and the Kobra Cartel.

Sun Tzu's The Art of War and Machiavelli's The Prince (Both are cited by Lala in discussing strategy.)

It's hard to say who delivers the stronger performance here with the most limited screentime; Marvin Jones III as Tobias Whale or William Catlett as Lala.

The effects work of Jefferson in orbit is good.

The script for this episode is one of the smartest in quite some time, with lots of witty banter.

Gambi guesses that Jefferson's affinity for electrons allow him to sense Jennifer's presence in the energy her physical body disintegrated into.

TC is able to talk to satellites from ground-level.

Gambi says they need a Hadron Particle Condenser to change the energy that was Jennifer's body back into solid matter.

Gambi is able to wake Jefferson up while he's in freefall by playing a series of high frequency sounds through his earpiece.

With a particle condenser, there's a chance of creating miniature black holes. These could disappear almost instantly or destroy everything around them.

According to Gambi, once the energy is fully rendered and the DNA sequences have been decoded by the particle condenser, it will transmute the energy into matter. TC says the process is similar to how an object is 3D printed, only using organic material.

(Jefferson flies up, blasting energy from his hands to carry him higher and higher. He doesn't look down until he starts breathing heavier from how thin the air is. Only then does he see the curve of the Earth and the fantastic view below him.)
Jefferson: Wow. I could see how someone could get used to this.

(Red quizzes Tobias on what a falling object over the city was, not knowing it was Black Lighting.)
Red: What do you think that was? Maybe a meteor or a shooting star?
Tobias: Do I look like Neil deGrasse Tyson to you?
Red: I'm not even really sure who that is, but I'm going to guess no.
Tobias: (chuckles) That's the problem with white privilidge. You get to be ignorant and still command respect.

(Tobias chuckles at the video footage of Jefferson in costume again.)
Tobias: You know, Red, you may actually have to earn your money.
Red: (levitating his oversize coin in his hands) Just say the word, boss.
(Suddenly, the coin flies across the room, burying itself in the wall. Tobias' smile fades.)
Tobias: Boy, I've got two words for you. Spackle. And paint. Now fix my damn wall!

(Destiny proposes a truce between The 100 and the Kobra Cartel.)
Lala: So the enemy of my enemy is my friend. That's what you're saying?
Destiny: Seems like a truce makes sense, given the circumstances. You can even pick the place. Bring some people that you trust and we can hash out the details.
Lala: Nah. I think I'm good. I'm not really looking to do a peace summit right now. And the way I see it, the enemy of my enemy doesn't make you a friend. It just means I've got more enemies to deal with.
Devonte: So you really want this truce?
Lala: Nah. It's time that we flip the script. Like they say, "There's no avoiding war. It can only be postponed to the advantage of others."
Devonte: What you saying?
Lala: Destiny came at me with that Sun Tzu, so I went straight Machiavelli.
(Devonte looks confused)
Lala: That means that that bitch gots to die!

Tobias: In chess the most dangerous pieces are the ones that your opponent keeps on reserve. You must make your opponent commit. And once committed, you have yourself a game. (chuckles) And whenever I have a game, I always win.

Tobias: If one would have power, one must recognize the hierarchies in all things.
Val: Who said that?
Tobias: Me.

Val: May I be candid?
Tobias: At your own peril.

Black Lightning: You know, I'd hoped you'd turned the corner when we fought the Markovians. How much death do you need, man? Killing the mayor wasn't enough for you?
Lala: Man, I didn't kill that fool! And none of my boys did neither.
Black Lightning: That's not what Chief Lopez thinks.
Lala: There's only one person I wanted dead that night. Tobias Whale. And you should want him dead your damn self! Because no matter what that negro's playing at, know this! He's coming for all of us.
(Sirens start to be heard in the near distance.)
Black Lightning: We've got to stop killing each other, bro.
Lala: Tell that to the police. Freeland's my house. I don't kill nobody in it. Unless they've got it coming.
(Black Lightning drops the charge on his hands. Lala lowers his DEG and nods.)
Lala: Glad to see you back. Freeland's been needing someone to look up to.

Jefferson claims to be able to sense that Jennifer is still alive. Anissa believes him.

TC says that the Starlink satellite says something weird is going on in the area where Jennifer exploded and is able to get it to give him a visual view of it.

Jefferson is able to borrow the equipment Gambi needs to save Jennifer from a "fast friend" at STAR Labs in Central City (i.e. Barry Allen from The Flash)

Jefferson dons his Black Lightning suit in order to fly into the ionosphere and try to absorb Jennifer's energy.

Jefferson absorbs Jen's energy but passes out in the process.

Gambi is able to wake up Jefferson before he crashes to Earth.

Tobias' new bodyguard is named Red. He's confirmed to be a telekinetic metahuman, powerful enough to throw a gold coin with enough force to penetrate a wall.

TC blames himself for not being able to stop Jennifer from going into the ionosphere.

Lydell Green's body is found by the police. The coroner discovers that despite the electrical burns on his body (delivered by Jefferson in 403) he was killed by blunt force trauma - the blows administered by Lala in 404.

Despite Detective Hassan Shakar's belief that Green was probably killed by the Kobra Cartel, Chief Lopez decides to pin his death on Lightning and use his death as an excuse to crack down on the vigilantes of Freeland.

Chief Lopez also appoints Detective Shakar to lead a special Meta Task Force and refuses to accept no for an answer when he tries to shrug out of the job.

Detective Shakar served in the USMC for four years and spent two years in special operations. He turned down a chance to work in SWAT because he wanted to be a real detective - not busting down doors at 2 AM.

Lynn knew about Jennifer taking trips into the ionosphere to get charged up.

Lynn blames Jefferson not being there for Jennifer in the last year for her getting hooked on the "charge." He, in turn, blames Lynn for not doing anything to stop Jennifer's addiction because of her own struggles.

The 100 is blamed for the murder of Mayor Billy Black in 404, despite his being killed with police rounds.

Lightning is named as the primary suspect in the death of Lydell Green and is publicly declared Public Enemy #1 in Freeland.

Jefferson tells the rest of the family that he did beat up Lydell Green, but says he did not kill him.

Anissa ignores a phone call from Grace so that she can stay with Lynn, who is drinking heavily and pigging out on junk food.

Anissa still hasn't told Grace about what happened to Jennifer.

Gambi guesses it will take at least another day before Jennifer's body is reconstituted.
Jennifer was a fussy eater as a child when it came to fruit. She had no trouble with broccoli, but wouldn't eat grapes that were too squishy or apples that were bruised.

Jefferson lost Jennifer at the supermarket while picking out apples once. He found her five minutes later reading in the magazine section, looking at pictures of football star Colin Kaepernick. It was the only time he ever lost one of his kids and until Jennifer's near-death experience it was the worst moment of his life.

Gambi says that he doesn't agree with Lynn about what happened to Jennifer being Jefferson's fault. He does, however, agree with her that Jefferson should never have stopped being Black Lightning.

Destiny calls Lala and suggests The 100 and Kobra Cartel call a truce to work against the police together. He reluctantly agrees, but immediately begins planning how to turn the tables against her.

Anissa still hasn't told her family that she and Grace were married in 403.
Anissa tells Grace about what happened to Jennifer.
Red does not play chess.
Red's father was killed by his mother. As a result, he doesn't trust any woman getting close to him or to Tobias.

According to Tobias, Yale's law school producers a larger number of law professors than any other college.

Jefferson attacks The 100's underground fight club as Black Lightning, before calling the police and tipping them off as to its location.

Lala denies killing Mayor Black, telling Black Lightning he only wanted to kill Tobias Whale and he was the only one he and his men shot at.

Lala and Black Lighting seem to come to an understanding. Lala even says it's good to see him back.

The next morning, when Gambi wakes up, Jennifer is 92% reconstituted.

TC did not sleep at all the previous night.

According to TC, the particle condenser is pretty sure it can put Jennifer's body back together, but they aren't sure if she'll still be alive when they do it.  The computer processers think there's only a 24% chance she'll be alive.

Lynn apologies to Jefferson for blaming him for Jennifer flying off.

Jefferson, in turn, apologies for blaming Lynn's addiction for Jennifer getting addicted to flying in the ionosphere.

Lynn says that Jefferson was a far better parent than she was.

The police ambush the site Lala chose for The 100 to talk peace with the Kobra Cartel.

Lala is shot to death but resurrects, kills several cops, and flees the scene.

All the other 100 members, including Devonte, are arrested.

Destiny watches the whole raid from a distance, and, seeing Lala escape, makes a phone call saying they need to bring in an assassin who specializes in metahumans.

Anissa takes Grace into the new Sanctum, which is hidden behind a secret door in the tunnels under Freeland.

Anissa tells the rest of the family about Grace and she's formally welcomed into the family.

As Jennifer's body reforms, Jefferson suddenly loses touch with her essence and can't sense her energy anymore. Gambi has no explanation for this.

The episode ends with Jennifer emerging from the pod, but she looks completely different than she did before, even as she clearly recognizes her family.

While Barry Allen is said to have run the equipment Gambi needed to Freeland, he does not appear on camera.

A solid, stunning episode, even before the cliffhanger ending with a new actress playing Jennifer. The opening scenes give us a high-water mark for the special effects and it's good to see Jefferson back in the suit again. More, it's good to see Lala back to being the ethical but not idiotic street tough he was back in Season One and Tobias being his usual erudite self.