Black Lightning Episode Guide: Season 4, Episode 3 - The Book of Reconstruction: Chapter Three: Despite All My Rage... 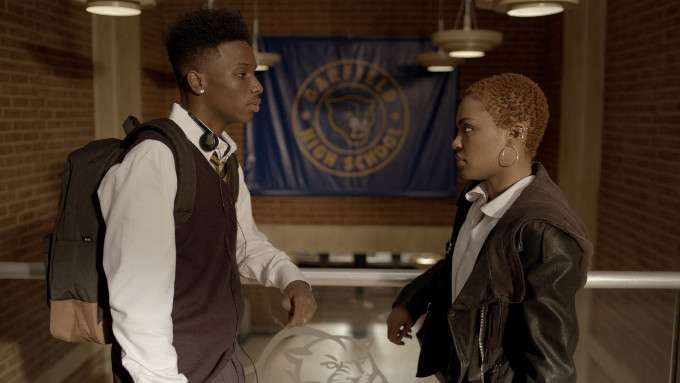 Jefferson steps in to stop Lala's latest business venture when he discoveres one of his teachers has started a side-gig in an underground fight club, as Anissa continues to care for the comatose Grace. Meanwhile, Gambi starts seeking a way to fight against the next generation of anti-metahuman weaponry, as Jennifer seeks TC's help in establishing a presence for Lightning on social media after she's made to look bad by a conservative news pundit.

Rebecca Larsen is a pretty clear parody of Tomi Lahren.

The episode subtitle seems to be inspired by a lyric from the Smashing Pumpkins song "Bullet With Butterfly Wings" - "Despite all my rage, I am still just a rat in a cage." This is a nod to both the cage fighting that is a major part of the story and Jefferson's feelings. (The song's chorus, "And I still believe that I cannot be saved," is a fair assessment of Jefferson's attitude as well.)

Lynn makes mention of a brother named John who served in the Army. Some theorize this is a nod to John Diggle from the show Arrow. However, there is no real evidence to support this theory.

It seems more likely the reference to Lynn's brother is a knowing nod to John Stewart. It is a common misconception among comic fans that Lynn Stewart is the sister of the Green Lantern John Stewart. While Tony Isabella did give Lynn the last name "Stewart" with the intention of  maybe connecting her to the Green Lantern, he never had the chance to do so during his run on Black Lightning and no other comic book writer ever made the connection either. The only reality where John Stewart and Lynn Stewart are related is in the world of the animated series Young Justice.

The network that employs Rebecca Larsen is GBS. This could be Galaxy Broadcasting System - the same company run by Morgan Edge, which owns The Daily Planet in Superman and Lois.

Grace is reading a Thunder comic in her hospital room in her final scene.

In Georgia, witnesses are not required for a wedding ceremony if the marriage license is filled out by the officiating figure.

The new generation of DEG have a stun setting, so they can be used on regular humans as well as metahumans.. At the highest setting, the new DEGs can knock a hole in the side of a tank.

TC discovers that the new make of DEGS are mostly mechanical and do not have a computer he can talk to. They also have an odd energy signature which Gambi believes is the power source.

The lowest non-stun setting on the new DEG is powerful enough to burn a hole through the original Black Lightning costume. Gambi suspects it might even be able to hurt the costume the ASA made for Jefferson.

The 100 Fight Club uses special filters to hide the identities of its fighters.

While Jennifer can supercharge her powers and heal quickly by entering the ionsphere, she suffers a "crash" several hours later.

Jefferson: I can't be the man that I was. He thought he could... change the world. I can't live with the... decisions that I made being him.

Jefferson: (To Lynn) Ten years ago you asked me to stop being Black Lightning. I did. Hypocrisy looks good on you.

(Jennifer is complaining about Rebeca Larsen making her look bad.)
Anissa: Jen, you are a little OC with your powers. I keep telling you, if you trained a little more, you'd have more control. Less property damage. No nicknames.
Jennifer: Says the woman who leaves giant cracks in the street just by landing dramatically. You can just walk, Anissa.

(Jefferson walks into Gambi's lab and sees him dissecting the new DEG. His face is bruised.)
Jefferson: Do I want to know how you go tthat?
Gambi: Same way you got this. (points to his face indicating Jefferson's bruises) Doing things we shouldn't'.

(Lynn has walked into a restaurant to find Tobias Whale waiting for her instead of Jefferson.)
Tobias: Forgive my ruse. But I knew you wouldn't attend on my account alone, so I kept my not vague. But please, feel free to order whatever your heart desires.
Lynn: I'd rather break bread with Judas.
Tobias: Fair enough. Though I'd be remiss if I didn't recommend the cognac shrimp.

Jefferson has a reoccurring dream of Tobias Whale breaking into his house and threatening him and Jefferson being powerless to fight him.

The 100 are now sponsoring an underground fighting arena that is almost entirely virtual, with people placing their bets on-line and no live audience watching the fights.

Lala kills Lydell Green, the child killer from 402, and his face becomes a tattoo on the back of Lala's right hand.

Lynn tests Jennifer's regeneration abilities by giving herself her powers while taking a bath.

Rebecca Larsen, a conservative media pundit with a show called The Larsen Line, runs a segment showing highly edited footage of Jennifer, calling her Lethal Lightning, suggesting she was responsible for causing the property damage that put one local man out of business.

The scroll on GBS news notes that one missing girl in Freeland hasn't been seen for three days and that 13 girls have gone missing within the past month.

A sign in the hall at Garfield High promotess a vigil for George Floyd.

Jefferson sees Marcel Payton, the teacher who lost his son in 402, and notes that he is bruised. Payton claims he's got a night job as a bounder.  Jefferson follows him and discovers that he is fighting in Lala's fights.

Grace awakens from her coma.

Jennifer asks TC to help her find who filmed her fight in 402.so she can get the unaltered footage on-line. He reluctantly agrees and points her to Terry Andrews.

Lynn's parents served in the military, as did her brother. She was discouraged from following them because her grades were good enough she could get into college on a science scholarship.

Lynn has always felt like an outside even in her own family. She concludes that her issues with Jefferson and her daughters come from the same feeling of trying to fit in where she doesn'tbelong.

Lynn's therapist advises her to just be herself and not worry about fitting in and own her own gifts.

Mayor Black has a meeting with Tobias. He makes it clear that while he will play nice in public, he has no delusions as to who Whale is.

Mayor Black refuses to go along with Tobias' offer to finance a new hospital with the condition that it be built where Garfield High School is.

Jennifer discovers that Terry Andrews is just a kid.

Terry is a Lightning fan boy and apologizes for selling his footage to Rebecca Larsen, saying he wouldn't have if he'd known she was going to tear Lightning down.

Terry agrees to upload the full footage on-line in exchange for a selfie with Lightning and her following him on his social media. (He originally asks for a photo of her kissing him, but agrees that's too much.)

Jefferson challenges the ringer Lala brings in to beat Marcel and wins.

Jefferson offers his childhood home to Marcel along with his winnings from the fight. Marcel takes most of the money, but offers part of it back to Jefferson as "the first month's rent" on the house.

Lynn receives flowers and an invitation to dinner. She assumes it is from Jefferson, but it's actually from Tobias Whale.

Gambi and Jefferson talk about the new DEGs. Gambi reveals that he stole one from Monovista and has been taking it apart trying to figure out how to defend against it.

Tobias tells Lynn that his sister had ALS and that while it was cured by the same people who experimented on him, it had some nasty side effects. To that end, he's willing to finance her clinic for the next 10 years if she devotes herself to curing ALS.

Curiously, Tobias' pitch to Lynn uses the same phraseology as her therapist, saying that she should just be herself.

TC uses his powers to create unhackable verified accounts for Lightning on all the major social media platforms.

Anissa and Grace's marriage license from a year earlier is still good.

Anissa paid $20 for Dr. Darius Morgan to become ordained to do weddings in the stage of Georgia.

Anissa and Grace are married.

The episode ends with Jefferson arriving at the restaurant and seeing Lynn having dinner with Tobias.

A welcome return to form after last week. After treading water and not much seeming to change for the span of an episode, all the storylines jump forward and we get to see everyone being active instead of passive, including Jefferson proving he can do good without putting on a costume; something it didn't seem he believed was possible anymore.