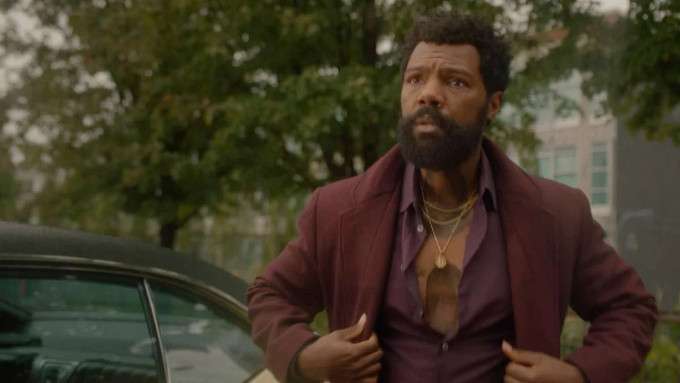 Lynn grows more concerned for Jefferson and his inaction, as the war between The 100 and the Kobra Cartel rages on. Meanwhile, Anissa grows closer to a new co-worker, Lynn becomes bolder in her own vigilantism watching Jennifer's back and Tobias throws down the gauntlet.

The summary for this episode made mention of a subplot where Jennifer became interested in a new boy at Garfield High. No such subplot appears in this episode. In fact, Jennifer is never seen at school in the episode and it's suggested she's skipping classes completely.

The cliffhanger at the end of last week's episode where Jennifer seemed to be falling to her death is not referenced in this episode and apparently amounted to nothing.

Anissa is oddly nonplussed by Grace shape-shifting into an apparently awake leopard after having been in a coma for a year. Has this been happening often? Is she only awake in the leopard form? Does she lapse back into a coma when she changes back to her human form? This really needed to be better explained.

How do Jennifer and Lynn, who are at home, get to the scene of the shooting before Anissa, who was just around the corner from it? They can fly fast, but not THAT fast.

The show's use of music continues to be one of its best features, with this episode opening ironically with War's "Why Can't We Be Friends" as we see Freeland being torn apart by gang violence.

DEGs or Directed Energy Guns are special weapons that can negate most metahuman abilities. The Freeland Police have just been outfitted with the latest DEGs for use against metahuman vigilantes.

The new wave of DEG are 600% more lethal than the last generation.

Tobias has a new longevity serum which also grounds him, making him immune to Black Lightning's powers. Presumably it also would protect him from Lighting.

Jennifer can accelerate her healing by flying into the upper atmosphere and taping the electrical energy in the air around her.

The principle of entanglement is a physics principle which notes that particles which are connected remain linked, regardless of distance when separated..

According to Lynn's research, the metagenes respond to different environmental influences, including other genes, which could be a variable in determining what powers a person may develop.

Tobias: Chaos has always been my friend.

(Jefferson is leaving the school. It is late. Tobias is waiting in the parking lot.)
Tobias: Finally.
(Jefferson throws lightning at Tobias reflexively. It does nothing.)
Tobias: (deadpan but smiling) Ouch. Are you finished? I had my serum tweaked to insulate my skin, so that was like doo-doo off a duck's back. If I was you, I'd calm down, Jefferson. It's dark outside, but anyone could see us right now. Don't blow your cover, big dummy. I just stopped by to say I haven't forgotten.
Jefferson: What?
Tobias: I haven't forgotten all the stress and strife you've caused me over the years. I also haven't forgotten that you cost me my sister's life.
Jefferson: No. No, that was all you. I haven't forgotten that you murdered my father. So, no matter what everybody else thinks, I know who you are.
Tobias: Hmm. I know who and what you are, too. And I have to wonder why I haven't seen your blistering Black ass playing dress-up lately.
Jefferson: I don't need a suit to kick your ass, so let's go.
Tobias: (chuckling) I'm a captain of industry now, Jefferson. A philanthropist, for God's sake. I can't be out here tussling in a parking lot with some thug. But that's the spirit. See, I'm gonna take away each and every thing you love. But it's no fun if you don't fight back.
(Tobias walks away laughing.)

Jefferson: Everywhere I look lately, it seems like I see things I shouldn't. People dead who shouldn't be. Bad people just getting away with whatever they want. I can't do anything about it/

Lynn's reaction to finding Jefferson passed out on the porch and calmly asking if he is alright. This is even stupider when you consider that she's a medical doctor.

Lady Eve is confirmed to be the leader of the Kobra Cartel, but nobody has seen her in a year. Destiny is her underboss and seems to be running the day-to-day operations of the gang.

Lala is officially recognized as the leader of The 100, with Devonte Jones as his right-hand man.

Monovista International is the company which has the contract to produce DEGs for the Freeland police.

Lala sends a group of men to disrupt one of Lady Eve's VIP poker games. Only the driver mades it back alive.

Lala orders Devonte to acquire some of the new next-gen DEGs the police are buying.

Jefferson passes out on the porch after venting his electricity in the middle of the night in a fit of rage. Lynn doesn't find him until the next morning.

The Pierce Family address is given as 7 Floyd Lane, Freeland, GA 30317

Going through the mail, Lynn finds a final notice for registration for the SAT's addressed to Jennifer.

Jennifer admits that she hasn't registered for the SAT or ACT yet.

Darius is a new doctor working with Anissa who flirts with her until she tells him she's a lesbian. She is not offended by the flirting, however, and does agree to go out for a drink as friends since he's still getting to know people in Freeland, having just moved there.

Tobias Whale has a new bodyguard and a new AI named Katie who oversees his smart office.

Tobias works with a realtor named Val, who helps him acquire 18 blocks in the Browning neighborhood. He does not plan to develop this land, saying the chaos of the region suits his purposes.

The hospital Lynn and Anissa are working at now is identified as the Center for Gene Therapy and Genetic Research.

Tobias is easily able to hack the computers at the Center for Gene Therapy and Genetic Research.

Lynn and Jefferson start seeing their therapist separately instead of together.

Lynn realizes she doesn't have any friends or hobbies outside of her work.

Tobias confronts Jefferson in the parking lot at Garfield High and tells him that he will be coming after him eventually, but first he intends to destroy everything Jefferson loves.

Grace shapeshifted into her leopard form in her sleep.

Anissa has not been going out as much as she used to.

Darius had a dog named Rusty he had to put down recently. He was 14 years old and been with Darius since he was 8 weeks old.

Anissa gets a notification of a shoot-out around the corner from the bar, on 3rd and Harper. She tries to go to change into Thunder but is stunned when Darius wants to come with her, thinking she meant doctors might be needed to treat the wounded.

Jennifer tells Lynn she's thinking of not going to college, seeing the work she does as Lightning as far more important.

Gambi is not on the radio as Jennifer approaches the shoot out.

Lynn gives herself wind powers to watch Jennifer's back when she goes into a fight.

Jennifer is able to get most of the 100 and Kobra gang members to drop their guns and run.

Lynn sneaks up on the one gang member who tries to sneak up on lightning and knocks him down. Lightning, in turn, shocks him after he nearly shoots Lynn.  In the process, Jennifer is impaled on a piece of broken glass.

Lynn tries to call Gambi for help, but he still isn't answering the radio.

Gambi is revealed to be at dinner with Laura, who admits she had a crush on him when they were younger. She offers him another job with Monovista. He once again turns it down, saying he was only going out with her because of his interest in her - not the job.

Anissa and Darius run into Marcel Payton - a teacher at Garfield High. His van was caught in the crossfire of the shootout and his son shot.

Jefferson is at home with Lynn returns. She lies about a head injury she acquired during the firefight.

Lynn admits to Jefferson that she's been using her metaboosters to go out and watch their children when they were fighting crime because he isn't Black Lightning anymore.

Jefferson accuses Lynn of trading one addiction for another after accusing him of being addicted to his powers.

Darius and Anissa are unable to save the wounded boy.

The next day at work, Darius is deeply disturbed by the boy's death

Jefferson meets with Marcel Payton and learns that he's been homeless for a year, since his home was destroyed after the War for Freeland. He was unable to find a new home since rent shot up after the War for anyone on a teacher's salary. Worse yet, CPS took the rest of his kids.

Jefferson confronts Gambi over his absence. Gambi explains that he was investigating the next generation of DEGs being made by Monovista and working on a defense against them.

Gambi breaks into Monovista and hacks their computers in person.

Anissa and Jennifer confront Lynn on her playing hero and tell her to stop.

Gambi meets with Laura again and agrees to take a job in the R&D wing of Monovista.

Anissa, as Blackbird, calls a meeting of The 100 and Kobra Cartel leadership. She calls for them to recognize a certain park as a safe space for homeless people and keep their people out of it.  They both agree. The area becomes known as the Blackbird Zone.

Lynn gives herself telekinesis to respond to an incident in Blackstone Square.

Jefferson calls TC, who helps him find the 100 shooter.

TC identifies the shooter as a man named Lydell Green, who lives on East 23rd Street.

The episode ends with Jefferson breaking into the home of the shooter and beating him up.

Another lackluster episode which addresses some things that should have been explained in the premiere last week. The most maddening aspect of it all is how out of character it seems for Jefferson to be sitting on the sidelines in both his roles as things get progressively worse in Freeland. It's almost as if the writes couldn't think of any storyline for him other than a sudden crisis of faith, which, while well acted by Cress Williams, isn't all that exciting to watch and seems outright confusing given all the other subplots.