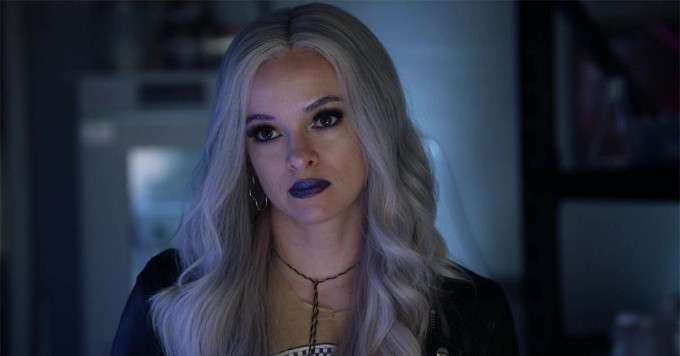 When Frost faces an unjust punishment for her crimes, Caitlin pulls out all the stops to save her sister. Meanwhile, Barry makes a discovery about the reborn Speed Force while trying to protect it, after discovering Fuerza might not be the danger he thought she was.

The Flash comics of Joshua Williamson (Alexa Rivera and Fuerza, the whole Forces plotline) and the Incredible Hulk (Alexa's description of waking up not remembering where she's been, power triggered by rage.)

Since Frost is a natural-born metahuman, Cisco's metahuman cure shouldn't affect her since it worked by neutralizing the dark matter in a metahuman's body that triggered their metagene. (The episode addresses this by saying they don't really know what the cure will do to Frost, but the logic from Season 5 is still there.)

D.A. Strong is quick to dismiss Caitlin's confession and the idea that anyone other than Frost would have neutralized the metahuman cure, even though there are many metahuman criminals who might not be crazy about the idea of the government taking away their powers. (The judge does sustain Cecile's objection on this point, but Caitlin's confession is completely ignored after it is revealed ARGUS provided a metahuman cure dose.)

Why didn't The Flash testify on Frost's behalf? As good as Joe West's word is, wouldn't having a known hero who had worked with Frost testify for her help her case even more? (It may not be legal for costumed heroes to testify in court without revealing their secret identity in the Arrowverse. This would also explain why Supergirl and Superman never testified against Lex Luthor.)

Honestly, there's no reason why Judge Tanaka can't just sentence Frost to Time Served or a lengthy probation based on her record, particularly given her clear annoyance with Kristen Kramer and her agenda. The Life In Prison Without Parole sentence is pure melodrama.

Danielle Panabaker gives two great performances in this episode as Frost and as Caitlin Snow.

The heist sequence in which Allegra, Caitlin and Cisco work to neutralize the meta-cure doses is well-paced and thrilling.

This episode reveals the Arrowverse Fuerza to be Alexa Rivera - a recovering drug addict turned nurse who works for the Keystone Cares charity.

In the comics, Fuerza was a young student named Alexa Antigone, who was from the South American nation of Corto Maltese. She was an anarchist who used her powers to fight against the corrupt government.

Unlike the Hulk (whom the Arrowverse version resembled) the comic book version of Fuerza did not lose her intelligence when she used her powers. This was a side-effect of using the Strength Force excessively, but she managed to avoid this.

The gist of Kramer's argument for taking away Frost's powers is based around the laws that prohibit felons from owning firearms. Since metahuman ability pose a similar threat, convicted felons should be denied super powers as well.

According to Dr. Tannhauser, there's a chance that the metacure could kill Frost instantly given the unique nature of her birth as a naturally occurring metahuman.

A 10-67 form must be filled out to reclaim lost property from the CCPD lock-up.

The meta-cure doses in the CCPD armory are neutralized using a inertial oximeter.

Arc radiators emit isotropic energy. Barry can use the ones in STAR Labs to emit focused doses on a microscopic level.

Caitlin: Frost, this is the miracle we’ve been waiting for. This is gonna save you.
Frost: By erasing my powers?
Caitlin: You heard Cecile, okay. Even if we can convince the judge to give you prison time, you’re looking at 10 to 20 years easy.
Frost: Then I’ll take it.
Caitlin: Why would you give up two decades of your life when there is a perfectly safe solution?
Frost: Changing who I am is not a solution. How the hell can you even ask me that? You’re the one who said the cure should always be a choice.
Caitlin: Then why won’t you choose this?!
(Caitlin starts to tear up.)
Caitlin: Do you remember when the Sage Force attacked, and I told you my greatest fear? It’s living life without you. I am terrified of living a life that you’re not in. Frost, you are my sister, I love you. And I cannot lose you.
Frost: And if I take the cure, you will. Caity, don’t you see? It’s not me you trying to protect. It’s yourself.

Frost: Here’s the deal. Taking away a meta-human’s powers isn’t the same thing as taking away a gun from a criminal. Erasing our powers is erasing our identity. It’s saying, “Hey, you were made bad, change that.” But shouldn’t justice be about changing the way a person acts, not the way they were born? I get it. You fear us because we’re different. You’d feel safer if we were the same. But different can’t be cured. It’s here to stay. We’re here to stay. Some of you only think of me as the criminal I used to be. Back then, I was only interested in protecting myself. But, then, I found someone else worth protecting. And protecting that person led me to protecting a whole city. And slowly I changed. I learned how… I learned how to be selfless instead of selfish. I learned that I’m my best self when I’m protecting other people.

Carmen Moore's speech about her platoon dying may be the hammiest acting in the show's history and the dialogue doesn't help.

It's impossible not to feel your soul die a little during the scene in which Joe West describes Kristen Kramer as a good cop.

Kristen Kramer is required to go through four scans and 3 weapon checks before gaining entry to ARGUS to visit Director of Technology and Science Chip Cooper.

Agent Cooper was last seen in 702.

Cooper served in the US Army before joining ARGUS.

Kramer is familiar with Cooper's background and asks him about his time serving at Fort Dakota.

Cooper entrusts Kramer with a silver briefcase. This is later revealed to contain a dose of Cisco Ramon's metagene cure.

Frost is still being called Killer Frost in the press and by the DA's office.

Frost is facing a 10-20 year sentence for her crimes. However, Cecile Horton is confident she can get Frost a reduced sentence of 18 months - possibly less with parole.

Frost asks the rest of Team Flash to trust in Cecile and the justice system and not look for a loophole to free her or to harass Kramer.

Barry and the Speed Force run to Keystone City after detecting a seismic isotope indicating the presence of the Strength Force. Iris stays behind to run coms while the rest of the team go to watch Frost's trial.

When Barry gets to the location in Keystone City, he finds a field site for Keystone Cares - a non-profit that helps the needy and no sign of Fuerza.

Matthew Norvock, last seen in 605, is also at the courthouse to offer Frost moral support.

D.A. Strong states the only goal of the prosecution is "to ensure that this extremely dangerous criminal no longer threatens our good citizens." This leads to the proposal to remove Frost's powers with the metagene cure rather than give her jail time.

Barry traces the Strength Force signal to a woman named Alex Rivera, who is the Field Supervisor for Keystone Cares.

Caitlin, Allegra and Cisco sneak into CCPD HQ and neutralize all the doses of the metacure in the armory.

Alexa Rivera is a recovering drug addict who went to school to become a nurse after cleaning up her act. She took a job working with a charity rather than a hospital, so she could be out on the streets helping people like her. She does not have a criminal record.

The Speed Force accuses Alexa of hurting people. This leads Alexa to shut down and refuse to talk to them anymore. She also refuses Barry's invitation to go to STAR Labs, blaming them for all the craziness in the city.

Kramer uncovered Cisco's hacking the cameras at the CCPD and the neutralization of the metahuman cure doses.

Caitlin tries to take the blame for the hack, but her confession is ignored.

Kramer reveals that ARGUS has provided a sample of the metahuman cure and they can have 100 doses ready by that evening.

Frost and Caitlin's mother determines that the cure won't kill Frost, but it will remove her powers.

Frost says she doesn't want to lose her powers because they define her.

Caitlin reveals that her worst fear is living a life without Frost.

Barry speaks to Alexa Rivera again, this time as The Flash. She admits to him that she's been having blackouts whenever she gets angry and is afraid she might be the monster that killed Abra Kadabra in 704.

The Flash convinces her to get tested at STAR Labs.

Frost confronts Kramer in an interview room as the judge is considering her sentence.

Kramer denies having a personal vendetta against Frost, but claims to hate all metahuman criminals who pose as heroes.

Kramer claims she lost a platoon in the service because of a metahuman who claimed to be a hero.

Kramer freely admits that she is trying to establish a precedent that any metahuman accused of a crime can be punished with the cure, regardless of the offense.

Frost makes a closing statement before the sentence is announced, saying that she takes responsibility for what she did and doesn't think it fair to use her as a bludgeon against all metahumans.

The judge agrees and sentences Frost to life in prison without parole, despite the objections of DA Strong and Kristen Kramer.

Kristen Kramer tells Joe she respects him despite their disagreements. Joe says the same but warns her about making sure to remember what side of the line she is on.

The episode ends with the Speed Force telling Barry it is time to choose a side.

A total mess. Frost's trial is just illogical on multiple fronts, but at least Danielle Panabaker's performance makes it interesting to watch. The same can't be said of the subplot with Barry reaching out to Fuerza, who has been turned into a second-rate rip-off of The Incredible Hulk who is nowhere near as interesting as her comic book counterpart.
Posted by Starman at 11:45 AM