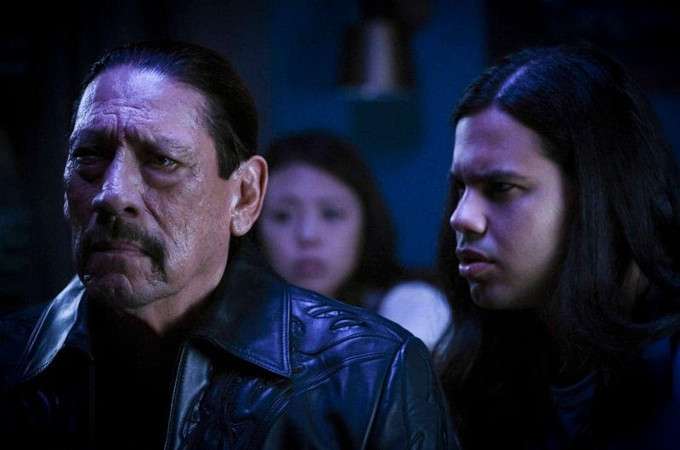 While Barry and Iris are away on vacation, Cisco is left in charge of Team Flash. Unfortunately, he soon finds himself preoccupied with a murder mystery where all the clues point to him being the killer. At the same time, Killer Frost puts herself in charge of the hunt for Ramsey Rosso while Joe West confronts Nash Wells over his business on Earth-1.

Kiss Kiss Bang Bang (the title, general neo-Noir theme, including a story of an unwitting hero solving a murderous conspiracy involving his ex.)

Carlos Valdes gets two nice turns here as Cisco and as Echo.

There are several DC Comics characters who use the codename Echo. One of them is a Legion of Super-Heroes villain who has sonic powers similar to those of Vibe in the comics.

Each Collector is equipped with a QT-Net - a quara-temporal containment barrier that is impenetrable to breacher technology and powers. When a Collector is killed in the line of duty, a QT-Net is activated and creates a planet-size force-field. This prevents their killer from breaching to another world, as the barrier can only be lifted by the Collector Agency.

Breach Psychosis is a condition that metahuman breachers sometimes suffer if they represss their powers. The symptoms include hallucinations, blackouts and dry mouth.

Earth-1's vibrational frequency is calibrated at a molecular level. This is what caused Nash Wells' gauntlet to trigger a large explosion.

Cisco finds a way to allow himself and Breacher to artificially "vibe" the weapon that killed Gypsy.  By using his white-noise sleep aide to generate low-level delta wave vibrations to stimulate harmonic resonance in his prefrontal cortex and thinking about Gypsy, Cisco can absorb the residual vibe energy from the object that killed her, using the shell casing as a trigger .

Cisco discovers a code programmed into his white-noise generator that converted it into a micro neural impulse disruptor, capable of creating effects similar to Breach Psychosis.

Cisco: (opening voice-over) Sometimes the truth is the hardest lie to see through. And when you can't put your faith in the truth, all you have left is yourself.

Ralph: Frost, as your life coach, going after Ramsey alone is probably gonna put me out of a job.
Frost: This isn't a joke. This is a fight. My fight. So stay out of it.
Ralph: We're a team. Your fights are my fights, so why don't you just take a breath and try trusting a friend?
Frost: I knew from day one not to trust this guy. But we did. And now people are dead. So I've gotta fix this.

Joe: (To Nash) You selfishly don't believe in anything or anybody. I used to be like that. When my ex-wife left me and my daughter I was broken. So much so that I went somewhere where I almost never go. Church. I didn't go there to pray or anything. I went there to yell at the universe for destroying my life. Next thing, I'm at home. I'm so hurt that I can't even cook dinner for my for my daughter. Doorbell rings. I open the door to what looked like my whole neighborhood standing on my lawn who had cooked food for us. You can have faith in anything, but it was then I realized that I... I have faith in people.

The opening scene where Cisco is confronted by the Breachers of Earth-19 takes place 12 hours after Barry and Iris left on vacation in Tahiti.

According to Barry, it's been two weeks since Ramsey Rosso has been seen.

Cisco's middle name is Baracus, after the character of B.A. Baracus from The A-Team.

Ralph wishes his first name were Hannibal, after the leader of The A-Team.

Barry's favorite movie is Jurassic Park, though his first instinct was to say The Empire Strikes Back.

BARI tells Ralph and Killer Frost to stake our Ramsey's lab, while Cisco holds down the fort at STAR Labs.

Joe and Nash become trapped in the sewer after Nash accidentally triggers a cave-in.

Cisco and Kamilla are sharing a bed together but it is not clear if they are sexually active or not.

The night before, Kamilla found Cisco standing at her apartment door with his keys in his hand and his shoes on. This night, Cisco was holding a pair of scissors.

Breacher arrives and tells Cisco that Cynthia (Gypsy) is dead.

Breacher was last seen in 417.

Breacher tells Cisco that Cynthia had been tracking an infamous hacker called Echo, whom she had mentioned to Cisco before. Breacher thinks Cynthia figured out who he really was and he killed her after somehow getting the jump on her.

Matthew Norvock was last seen as the DJ at Killer Frost's birthday party in 603.

According to Norvock, Ramsey Rosso killed two regulars at his bar called Rat and Pops.

Frost decides to go after Ramsey as Caitlin, thinking she can talk sense into him.

Zeal says that due to multi-dimensional signal speed, their best guess is that the murder happened some time between 2:30 and 4:30 a.m.

The agency also uncovered a 301-H energy cartridge. Standard issue, with no finger prints.This, coupled with the Sigma Baryon residue they found suggests that the murder weapon was a transonic-demolecularizer.

Cisco says they can use STAR Labs satellites to track the murder weapon based on its energy signature.

The vision Cisco and Breacher share show him killing Gypsy.

Kamilla finds the murder weapon in a drawer in Cisco's lab.

According to Breacher, every other version of Cisco Ramon in the multiverse is a pencil pusher. None of them are scientists or superheroes capable of killing Gypsy.

Kamilla recalls that Cisco was sleepwalking at 4 am on the night Gypsy was killed. This is within the window of when she was said to have died.

Ralph saves Joe and Nash, having figured out where Joe was based on where his car was parked and the map he left behind that had the collapsed tunnel marked.

Caitlin fails to make Ramsey see reason. He says he will kill her the next time he sees her.

Cisco determines that Echo is his Earth-19 counterpart.

Echo's specialty was hacking multiversal databases to create new identities for people who wanted to take over the lives of versions of themselves who were living better on another Earth.

What enabled Echo to kill Gypsy was that she was stunned to recognize his face as that of her ex-boyfriend and it made her hesitate just long enough for him to pull his disintegration gun.

Gypsy's last action was to send herself and Echo to Earth-1. Breacher guesses this is because she trusted Cisco to be able to figure out who the killer was.

Breacher invites both Cisco and Kamilla to Cynthia's remembrance ceremony.

Cisco and Kamilla admit they love one another.

Chester's energy level in the MAC is said to be at 87%.

Cisco says he'll be out for a week because of the remembrance ceremony.

Nash says he knows how to save Barry Allen's life.

Gypsy is killed off purely to give her father and Cisco angst and to push a narrative where Cisco has to prove he's still capable of being a hero, even without his powers

A decent enough filler episode, with a strong focus that Carlos Valdez proves more than capable of holding up on his own. That does little to keep this episode from feeling weak given how poorly developed Kamilla is and how repetitive Killer Frost going off on her own and Joe being proven right in a contest of faith are based on earlier episodes. Still, at least Ralph gets to prove his worth in two different moments that have nothing to do with him being comic relief and Danny Trejo is as delightful as ever as Breacher.