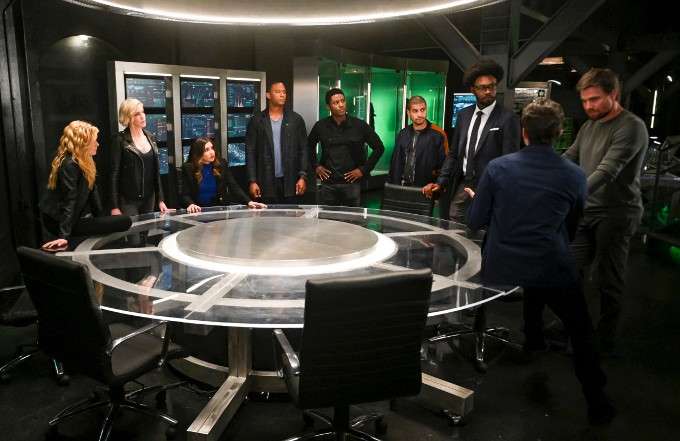 Faced with a mysterious new Deathstroke, the original Team Arrow and their time-displaced proteges from the future must join forces.

The Shawshank Redemption (Curtis makes reference to it, as the team crawl through the sewers to stop Grant Wilson's bombs) and the Rebirth Deathstroke comic. (Mention of Buredunia.)

The usual rules regarding paradox and changing your own past are handily ignored by Team Arrow 2040. (Presumably whoever brought them back in time is also preventing paradox from affecting them?)

Ben Lewis and Stephen Amell have great interplay as the older William and Oliver.

While trying to determine the identity of the new Deathstroke, it is said that Slade Wilson is currently in Buredunia.  This is a fictional nation on the eastern side of the African continent in the DC Comics universe, which featured in the Deathstroke Rebirth comic series.

The new Deathstroke is eventually revealed to be Grant Wilson - Slade Wilson's eldest son. In a potential future shown on Legends of Tomorrow, Grant Wilson was responsible for exposing Oliver Queen's secret identity to the world and took over the Star City of 2046.

In the original comics, Grant Wilson was the first Ravager - an assassin who tried to follow in Deathstroke's footsteps. When his body was destroyed by the experimental treatments that HIVE developed in an effort to mimic the formula that made Slade Wilson into a super soldier, Wilson swore revenge on the Titans and promised to fulfill his son's contract on the superhero team.

At the end of the episode, Grant Wilson is sent to Blackgate in Gotham City. In the DC Comics Universe, Blackgate Penitentiary is the prison reserved for non-super-powered criminals in Gotham City.

The Deathstrokes send secret messages in an ink that only shows up on wet paper under a black light.

Grant Wilson sets up his bombs on a relay device that can be detonated remotely by a phone.

The relay device is revealed to be an intervalometer, pulsating in a consistently synchronized pattern. It has a transfer switch embedded into the mainframe. Disconnecting the red wire deactivates it.

William: Dad, we all have the chance to get to know each other now.
Oliver: If your sister will let me.
William: Mia will come around. You know, she can be a little bit a little bit stubborn and hard to reach sometimes.
Oliver: (dryly) Shocker. Where'd she get that from?
William: (dryly) Mom, I guess.
(The two laugh.)

Mia: You know, I survived my whole life without you. I don't need you to play Dad now.
Oliver: Hey! I'm not playing Dad. I am simply telling you that it is not tactically wise to go out there by yourself...
Mia: Fine. I'll take Laurel.
Oliver: (clearing throat) ...when you are letting your decisions be driven by your emotions. Trust me! I've been there!
Mia: You don't get a say. You gave up that right when you left me and Mom alone in that cabin! How could you just abandon us?!
Oliver: Because I chose to keep you safe, and I chose right.
Mia: You just wanted to be a hero, so you put your mission above your family! Don't worry! You'll learn to live without me pretty easy. Just like I learned to live without you

Oliver: She's right. I chose to go with the Monitor. I abandoned her. I haven't earned a say.
William: Yeah, but that doesn't mean she doesn't want you to have one or or that you shouldn't, and I'm saying that from experience.
Oliver: You have kids in the future?
William: Oh, God, no. I mean, don't get me wrong. Kids are a miracle or whatever, but I was actually referring to when I left you to go live with grandma and grandpa.
Oliver: Yeah. That one's still pretty fresh for me.
William: Right. I mean I... I thought you hated my guts. I hated you for abandoning me.
Oliver: I tried.
William: True, but I wanted you to try harder, push a little more. I think that's all any child wants from their parents.
Oliver: I'm sorry.
William: It's okay. Dad, I am glad that you're in my life. Then and now. And Mia will be, too.

It is revealed that John was teleported to Star City, along with Oliver and Team Arrow 2040.

Dinah and Rene learn that Felicity was pregnant and had a daughter named Mia. In the original 2040 timeline, they didn't meet Mia until she was an adult and didn't find out she was Felicity and Oliver's daughter until later.

Connor accidentally lets it slip that John Diggle adopts him, not knowing they had traveled back in time to before that happened.

William tells Oliver that he never saw him again after he left him to live with his grandparents and nobody is sure what happened to Ollie in the future. He just vanished and was presumed dead. He also says that he never saw Felicity again until recently in his time.

William tells Oliver that he became a tech magnate in the future.

Archroyal Capital CEO MacMillan Fairfield is the first victim of the new Deathstroke, who sews a bomb into his stomach, timing it to go off inside Starling General Hospital.

Dr. Eliza Schwartz, who frequently treated Team Arrow on the down-low, is killed in the bomb explosion.

Team Arrow determines the new Deathstroke is not Slade Wilson or Kane Wolfman.

Curtis Holt, last seen in 722, comes out of retirement to help fight the new Deathstroke.

Rene is currently running for a City Councilman position in Star City.

Oliver has a sample of cloth clipped by the antimatter wave that destroyed Earth-2. He asks for Curtis to analyze it and find a way to replicate the effect.

Connor accidentally mentions the Canaries to Dinah, describing them as an organization comparable to Knightwatch in his time. High praise indeed, considering he compared ARGUS to a kindergarten glass, relative to the power Knightwatch held in 2040.

According to Connor, "Star City's cancer is the rich" is JJ's favorite catch-phrase.

Connor recalls that Grant Wilson founded the Deathstrokes and trained John Diggle Jr., who eventually took over the gang from him.

After Connor reveals to Diggle that his son becomes the leader of the Deathstrokes in the future, William comes clean about the rest of the bad news about the future they tried to keep hidden. Namely, that Zoe Ramirez is dead at John Diggle Jr's hand, that Star City 2040 is a terrible place run by crooked cops and politicians and that Rene Ramirez getting elected to City Council was the start of things going wrong.

The team figures out one big thing has already changed - in the original timeline, Grant Wilson's base was never blown up in 2019. Since that has changed his plans, that may mean the future can be changed and the Deathstrokes can be arrested before they become the cult heroes that inspired John Diggle Jr.

Black Siren admits that she doesn't like Oliver and thinks he's a dick.

Black Siren makes reference to the events of 706 and how she talked Felicity out of killing Ricardo Diaz.

Connor and William are able to disarm the bomb.

Mia and Oliver are able to capture Grant Wilson.

Grant Wilson is sent to Blackgate Prison in Gotham City and it is said he'll be there for at least 20 years.

Rene decides to continue his run for office, but focus on not letting the bad future he heard about happen.

Curtis tells Oliver he figured out how to replicate the energy wave, but it will require tools he doesn't have, plutonium and be highly illegal. He does, however have a lead on a General who may have the tools they need. He currently lives in Russia.

Black Siren is approached by The Monitor, who says he can restore Earth-2 if she betrays Oliver Queen.

It is never revealed what Oliver and John were doing when they were teleported to Star City.

Better than it has any right to be, given that most of its drama is based around various characters being mad about things that haven't happened yet but which might happen, unless they decide to try and stop it from happening. The effects of this on the timeline are largely ignored and it's still unclear at the end if John Diggle Jr. might be redeemed and Zoe Ramirez might still be alive in the future. Still, there's a lot of good character moments (especially Oliver and William interacting) and the performances help salvage a very strange script.
Posted by Starman at 12:14 AM