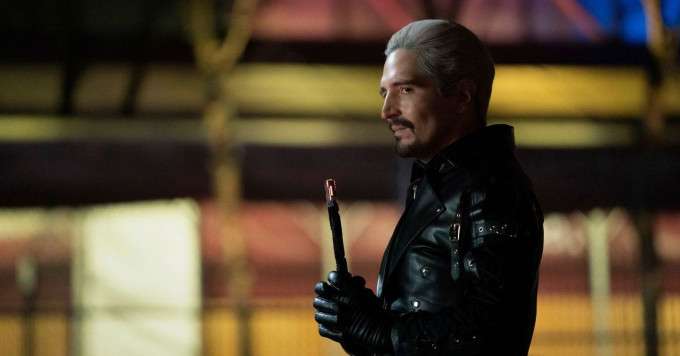 Abra Kadabra returns, seeking revenge on Barry Allen and the rest of Team Flash. Meanwhile,  Caitlin suspects something is wrong with Frost, as Iris confronts the darkness of her time in the Mirrorverse and seeks help in dealing with it.

The Flash comics of Joshua Williamson (introduction of Strength Force), the writings of Arthur C. Clarke (mentioned by Chester, obelisks a nod to 2001: A Space Odyssey)

Ignoring the quality of Iris' writing and Allegra's comments indicating her article has been plagiarized from other sources, it seems likely the reason the Central City Citizen is losing readers is because it has taken Iris a week to write a basic news article about a major event!

It's revealed that Frost still has a warrant out for her arrest in Central City. Given how high and mighty Barry is about that sort of thing, you'd think this would have been addressed by now or that Joe (as the detective in charge of metahuman investigations) would have tried to do get the warrant cleared. Heck, get Cecile to argue for a dismissal based on good behavior!

The CGI on the Strength Force wielder looks terrible.

Cisco makes mention of Kord Industries helping out with the effort to rebuild Central City This is a nod to the company of Ted Kord, aka The Blue Beetle, who has often been referenced in the Arrowverse but has yet to appear on camera.

Chester evokes the name of Arthur C. Clarke when confronted with the odd obelisks appearing around Central City. One of the founders of modern science fiction, the obelisks are a nod to Clarke's 2001: A Space Odyssey. It's appropriate that Clarke is mentioned in this episode with Abra Kadabra, as Clarke's Third Law - "Any sufficiently advanced technology is indistinguishable from magic." - is a fair justification of Kadabra's techno-wizardry.

At one point, Cisco and Chester discuss how to go about rewatching the Star Wars movies, with The Machete Order being mentioned. This is a way of viewing the Star Wars films where one starts with A New Hope and The Empire Strikes Back, but then watches Attack of the Clones and Revenge of the Sith before moving on to Return of the Jedi. This allegedly offers the most cohesive story experience. (The other two most popular methods are Release Order and Chronological Order.)

Kadabra makes reference to a villain called the Chronarch, who he claims will come for The Flash in his future. There are two characters with the title Chronarch in the classic DC Comics books. One was the tyrannical ruler of 64th Century Earth, who was defeated by an unlikely team-up of The Flash and Abra Kadabra. The other was a 30th Century scientist named Circadia Senius, who was appointed head of the Time Institute during the time of the Legion of Superheroes.

The anti-matter bomb Kadabra fashions is based around a core of pure Valorium. This is the same metal used by the Legion of Superheoes to create their trademark Flight Rings. Valorium is an alloy of Nth Metal (the metal used by Hawkman and Hawkwoman to fly) but is more durable and much denser.

The super-strong earthquake-generating villain who kills Kadabra appears to be empowered by the Strength Force - an energy field in The Flash comics, similar to the Speed Force, but tied to gravity and the Earth rather than lightning and motion.

Cisco says the first Kadabra crime scene is infected with temporal energy. He says he can carbon date the energy as being 43 centuries from now, which seems to be Cisco dumbing down how he's actually tracking the energy given that carbon-dating is used to track the death of organic matter.

Kadabra charges his anti-matter bomb by teleporting around the city, using his kinetic energy as a power source.

A trace amount of anti-matter is enough to nearly take out The Flash's leg. A core the size of a baseball could destroy Central City.

A routine medical scan in Kadbra's time determined that he had a sudden increase in his somatic memory cells. This is apparently a common side-effect of neuro-temporal displacement that is caused by speedsters disrupting the timeline.

Abra Kadabra: The last time we met, you begged me to find a glimmer of light in myself. Well, I found that light, that hope. And then you stole it from me. Now I'm going to take something from you.
The Flash: I don't know what you're talking about.
Abra Kadabra: Let me make it crystal clear for you, Flash. You cannot defeat a man who has lost everything.

Abra Kadabra: I don't get it. We're mortal enemies in the future. Why are you doing this?
The Flash: So the next time we meet, maybe we won't be.

Every time someone uses the phrase "Central City Strong." Resist the urge to make a drinking game of it. You will be dead within 20 minutes.

Abra Kadabra: I'm the greatest magician of all time, which is why you should be more than just afraid... You should be terrified.

In the week since the battle with Mirror Mistress in 703, Barry has taken Iris on a trip to Maui. He also brought her fresh crepes from Paris for breakfast that morning.

Central City has been experiencing a series of earthquakes over the past week, with the latest measuring 4.7 on the Richter scale.

Mirror Mistress is officially being called Mirror Monarch in the Central City Press.

Barry makes an appearance as The Flash on The Arielle Atkins Hour to encourage people to chip in on rebuilding Central City.

STAR Labs does a lot of volunteer work in the community.

Cisco mentions that Kord Industries is supposed to be taking over for them on a construction site in an hour.

Caitlin has been tired and head a headache since the fight with Mirror Mistress.

Frost still has a warrant out for her arrest in Central City, despite her reformation.

Kamilla has been busy taking photos of the destruction of Central City. This leaves Allegra having to act as Iris' sounding board on the Central City Citizen more than usual.

Viewership on the Central City Citizen site is down 73%.

Allegra tells Iris her story on the battle with Mirror Mistress stinks because she says nothing about her own personal experiences during the event.

Abra Kadabra kills a volunteer at the constriction site, where a small but heavy obelisk manifests, riddling his body with razor-sharp playing cards.

Kadabra was last seen in 318. However, his picture was briefly seen among the villains resurrected by Crisis in Cisco's Who's Who Binder in 610.

Chester is now working as a CCPD-consultant intern.

Iris goes to a support group for Mirrorverse abductees and interviews a couple named Steve and Alice. Steve was abducted and watched his mirror universe clone sleep with Alice - a nightmarish scenario that triggers Iris' own bad memories of the Mirrorverse.

Kadabra refers to Cisco and his new tech suit as Mecha-Vibe.

Kadabra makes reference to a villain called The Chronarch and says he's doing The Flash a favor killing him now.

Frost is able to bring down Kadabra while he's distracted.

Kadabra is handed over to ARGUS.

ARGUS has a new Director of Technology and Science who is very literal and has no sense of humor.

Frost does not need to hide herself from ARGUS personnel, as they are aware of her reformation.

Frost took some kind of techno cuff from Kadabra before he was taken away.

Frost is experiencing the same fatigue and headaches as Caitlin. Despite this, Cisco's tests determine that she's perfectly healthy.

Kadabra allowed himself to be arrested to gain access to a third obelisk that ARGUS picked up one week earlier.

Barry tries to steal Iris away for a night at a beach villa in Monaco, but the plans are changed when he learns of Kadabra's escape.

Iris is having a major bout of writer's block.

Kadabra merges the three obelisks into a sphere.

Kadabra claims that Barry stole something from him and now he's returning the favor.

Cisco determines the bomb Kadabra conjured is made of pure Valorium, so Barry can't phase through it.

Barry is still depressed that he didn't see through the fake Iris sooner. This is why he's been going all out to pamper Iris since her return.

Barry determines that the thing Kadabra had stolen from him was his family, based on the idea of what he nearly did because of Iris being taken from him.

Cisco determines that Kadabra's cuff contains the Martial Memory Restorer used by Laurel Lance to return Mia Queen's memories of the pre-Crisis reality from A809.

Cisco guesses that Kadabra stole the MMR at some point in the future and that something in his pre-Crisis memories brought him back to Central City in the 21st Century.

Barry confronts Kadabra at Tagaloa Plaza and confirms that Kadabra regained the memories of all his doppelgangers, including one who had a wife and infant son.

Kadabra claims that, in the future, Barry will become obsessed with the future.

Kadabra confesses to stealing the MMR from The Flash Museum and fixing it.

Barry guesses that Kadabra is trying to destroy Central City instead of him because he already did the math and realized he couldn't kill The Flash so destroying his city was the only revenge available to him.

Barry talks Kadabra out of setting off the bomb.

Kadabra reveals that his real name is Philippe. His son's name was Luca and his wife's name was Amélie.

A large hulking figure tied to the earthquakes appears at Tagaloa Plaza and attacks The Flash and Abra Kadabra. It somehow absorbs the full power of the antimatter bomb before killing Kadabra.

Joe is having to act as an escort to a liaison from the Governor's Police Compliance Commission.

Allegra is given a full staff writer position on the staff of the Central City Citizen.

Iris goes to a meeting of the Mirrorverse Survivors as an attendee rather than as a reporter. She reveals publicly that she was held captive for three months.

Precisely how Caitlin and Frost were separated occurs off-camera.

A busy episode with too much going on and not nearly enough focus on its most interesting aspects. It's a bad sign when I'd much rather watch Cisco and Chester playing Fortnite than watching Barry fight the villains.