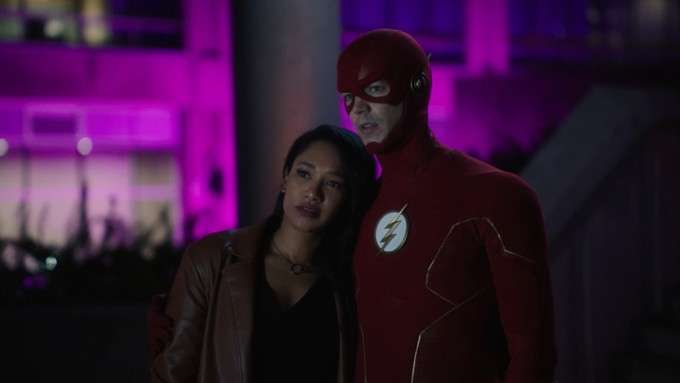 As Mirror Mistress makes her move, Barry is ready to hang up his costume after the damage he did. Thankfully, a new ally with a familiar face emerges to help save the day, as Team Flash rallies to rebuild the Speed Force and save the world.

Invasion of the Body Snatchers (the theme of people being replaced by duplicates) and The Flash comics of Joshua Williamson.

Why didn't Eva send her minions to attack STAR Labs directly, when she sent one cop duplicate to try and covert Joe West and Cecile Horton?

It must be noted again that everything that happens in this episode (and indeed the second half of Season 6) is Barry Allen's fault and that the only reason Eva went about abducting and replacing people was because of Barry's efforts to expose her and his earlier refusal to work with the villain who was holding his wife hostage, even though it would be far from the first time Barry tried to find common ground with a supervillain. What makes this more maddening is that Eva gives up after Iris (of all people) tries to show her some sympathy.

Granting that the COVID-19 crisis and the firing of Hartley Sawyer limited their options, it seems incredibly short-sighted for the series to write out Ralph and Sue like they do here. It also seems incredibly unfair to Natalie Dreyfuss, who effectively lost her job because of someone else's mistakes. Hopefully the role of Ralph Dibny will be recast eventually and we'll see them again.

The scene where Cisco awkwardly says goodbye to Harrison Wells 1.0 is a great moment for both Carlos Valdez and Tom Cavanagh.

The fight between The Flash, Frost and Vibe against multiple Mirror Mistress duplicates is the Mirror Master fight fans have been wanting to see for seven years.

When seeing the melted Ralph Dibny, Cisco declares "Holy Plasmus!" In addition to be a nod to the 1966 Batman TV show's Robin and his habit of exclaiming that various things were holym ("Holy Sardines, Batman!") it's also a reference to the Teen Titans villain Plasmus, who had a similarly molten appearance.

The final scene shows four colors of energy wash over Central City after the new Speed Force is created; red, green, blue and yellow. This may be a nod to the Still Force, Sage Force and Strength Force; three forces which were revealed to be hidden within the Speed Force during The Flash comics run of Joshua Williamson.

When Barry pulled Iris from the Mirrorverse and she resisted, it created a molecular anomaly. All her neural pathways became disjointed, and, according to Caitlin, it looked like her brain had been remapped.

Light photons are elementary particles that exist everywhere in nature.

According to Eva, the applications of her reflective chip technology are endless and she could increase the crop yield of world-wide agriculture tenfold overnight, ending world hunger.

Wells describe the Crisis as a temporal coalescence.

Ralph Dibny's body temperature after being caught in the McCulloch Labs explosion is 500 degrees.

Barry theorizes that he can recreate the Speed Force by drawing upon his love of Iris and the residual Speed Force energy inside of her from her time as a Speedster. This is accomplished by repurposing the Artificial Speed Force to tap an organic source instead of an artificial one. This requires that the energy coupling be rerouted along with the energy cycle and the fusion sphere being completely remapped.

Since Mirror Mistress' body is made of quantum protons, which are capable of sub-light speed, she's technically faster than The Flash.

Mirror Mistress: I'm not human. I'm something better. That is why I'm showing you mercy.

Wells 1.0: The other Wells may be gone, but they left an imprint, memories, and so let me just say that, whatever is wrong… Let me help you because they would want me to.
Barry: You can’t. This enemy that we’re facing is all-powerful, plus my speed is gone.
Wells 1.0: Aren’t you the Paragon of Love? Look, anyone can save the world with their speed, with their might, but it takes a real hero… A once-in-a-lifetime hero, to do it with his heart.
Barry: What is that supposed to mean?
Wells 1.0: It means run, Barry. Run toward love.

(Cisco and Wells 1.0 are saying their goodbyes.)
Cisco: If Kamilla and I are lucky enough to share half of what you and Tess have…
Wells 1.0: You will.
(There is an awkward pause as they regard each other.)
Cisco: This is weird.
Wells 1.0: Yeah, we just met.
Cisco: Right? It’s like I barely even know you.
Wells 1.0: We barely know each other.
Cisco: I mean, you’re nothing like him.
Wells 1.0: Like who? Oh, the Harrison Wells you used to know.
Cisco: Or the man I thought was Harrison Wells. Of course, he turned out to be a…
Both: A jerk?
Cisco: Yeah.
Wells 1.0: Yeah.
(They both chuckle.)
Cisco: How do you miss someone you barely even know?
(Wells 1.0 shrugs a bit and offers Cisco his hand. He takes it and they shake hands firmly. Cisco turns to walk away but then turns back around.)
Cisco: Before you go, how exactly do you travel in time?
Wells 1.0:  Easy. Just… like this.
(Wells 1.0 waves his hand and disappears in a cloud of green particles.)

As the episode opens, Barry is in shock and Iris is in a vegetative state, as Cisco, Frost and Allegra come to after being knocked out in 702.

Caitlin takes over from Frost to treat Iris.

Barry refuses to reconnect to the Artificial Speed Force, saying it turned him into something just as bad as Eobard Thawne.

The CCPD is besieged by reports of people being attacked by hands coming from mirrors and loved ones not acting like themselves.

Joe meets with Sue Dearbon's parents, not knowing they are mirror duplicates.

Sue disguises herself as a CCPD cop.

Sue meets with Joe in secret and tells him about the mirror duplicates. This reminds Joe of the fake Iris and he puts two and two together.

According to Sue, Ralph is off tracking a lead.

Eva McCulloch's powers are now strong enough that she can grab people through any reflective surface: not just mirrors.

Barry suggests they cut power to the city so as to reduce the light available for Eva's powers to work.

Barry is drawn into the Mirrorverse, where Eva says once again that she doesn't want to kill anyone; she wants to build a better world,, but his actions convinced her that humanity doesn't deserve it.

The Harrison Wells seen in 702.manifests inside STAR Labs. He claims to be the original Harrison Wells of Earth-1, who was murdered and replaced by Eobard Thawne.

Wells 1.0 theorizes that when Nash Wells sacrificed himself in 701, the universe required a balance. This apparently led to his resurrection as an energy being made up of multiversal particles.

Wells 1.0 has the knowledge and memories of all the other Harrison Wells. For that reason, he offers to help Team Flash because they would have helped.

One of Eva's mirror duplicates targets Cecile and Joe West, cornering them in Barry's lab at the CCPD.

While sitting with a comatose Iris, Barry has an idea on how to repair the Speed Force, referring to when Iris had speed powers in 416.

Joe tries to help Cecile escape by sending her into the duct work. Instead she is caught, and replaced by a mirror duplicate.

Cisco, Frost and Barry fight against Eva and her mirror duplicates.

Iris briefly manifests mirror-control powers during the fight against Eva.

Eva surrenders after Iris points out she's endangering the world she claims to want to save.

Eva sends her "children" back to the Mirrorverse and returns all the people she abducted, including Singh and Kamilla.

Wells 1.0 tells Allegra Garcia that someone else will have to train her in using her powers because their paths are heading different ways.

Wells 1.0 originally would have lived to be 92 years old on Earth-Prime.

Somehow, being reborn as multiversal particles has given Wells 1.0 the ability to see the past, present and future along his personal timeline and he can travel to any moment he wants. He considers this ability useless, however, unless he can share it with his wife, Tess, whom he only got four years with before his death.

Wells 1.0 intends to relive the 4 years he spent with his wife until he runs out of time.

Wells 1.0 tells Cisco that he and Kamilla will be lucky enough to share half of what he and Tess had.

Ralph needs to spend a few more days in the BCU before his face heals.

Sue turns down a chance to join Team Flash, saying a do-gooder team is not her style. Besides, she and Ralph have plans to travel the world and take down gangs like Black Hole.

Ralph says he'll be back someday and take Frost on that road trip they planned.

The final scene reveals that when Barry created the new Speed Force, it released red, green, blue and yellow energy over Central City.

Eva blows up McCulloch Labs off-camera, while Ralph Dibny was inside it.

A fragmented mess that does a disservice to some of the best things to come out of The Flash Season 6. The best thing that can be said about it is that at least its over and from here on out we'll get to see what the showrunners really had planned for Season 7.