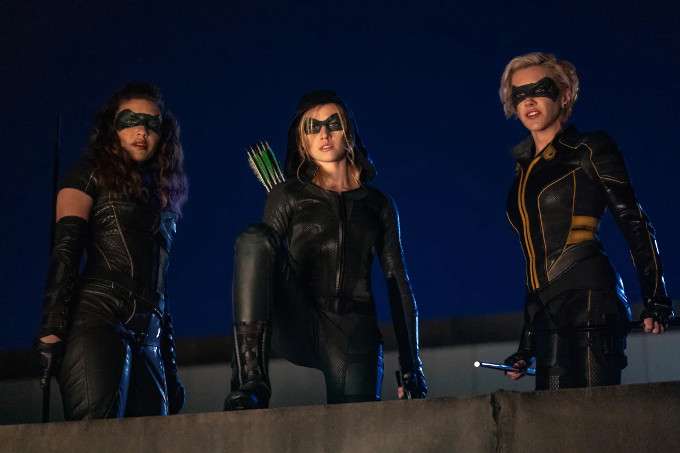 It's 2040 and Mia Queen's life couldn't be better. She just graduated from college and her boyfriend J.J. just proposed. Then two of her father's old friends showed up and suddenly Mia remembers being someone else... something else. Now one of her best friends has been kidnapped and the future her father sacrificed himself to save is in peril, leaving Mia no choice but to become the new Green Arrow.

Birds of Prey (idea of all female vigilante team)

While Mia may have had her knowledge of how to fight restored by Laurel's device, it seems highly unlikely she'd be in the same physical condition she was as an underground pit-fighter as a rich debutante.

For a reformed supervillain, Laurel seems to be a pretty deep believer in the idea that people can't change and is adamant that J.J. Diggle has to be a bad guy because he was a bad guy in the original timeline.

Kat McNamara has a brilliant turn here, truly selling Mia's conflict between the life she rememebrs and the comfortable one her father wanted her to have.

The aesthetic of Star City 2040 is solid, looking relatively close to the present day but with enough changes that it seems like a credible "not-too-distant future."

The club where Mia holds her graduation part is called The Fish Net. This is a nod to the most famous fashion accessory of the various versions of Black Canary in the comics.

The device Laurel uses to restore Mia's memories was built by Cisco Ramon and replicated the telepathy of the Martian Manhunter.

Mia took classes in design theory and sustainable concepts. These allow her to recognize the plants in the background of the photo of Bianca as biophilic in nature, meant to power the building photosynthetically.

Reporter: What would your dad think about your life choices?
Mia: My father saved Star City so that we can enjoy it. And he also never graduated college, so I think he'd be pretty impressed.

Mia: I spent my whole life looking at these pictures of my dad, all of the amazing things he did for the city, what a hero he was, wondering how I could possibly live up to that in anything I chose to do. And...And so I chose to do nothing.

Laurel: People are who they are, Mia, no matter what timeline, universe, or Earth, and that's not your fault.  (...says the reformed supervillain!)

Bianca: (after being saved, as everything blows up) Who are you bitches?!

Laurel attempts to get a woman named Bianca Bertinelli to come with her, shortly before she is abducted by a group of men.

Star City's mayor in 2040 is someone named Ramirez, who is running for his third term. It is suggested that this might be Rene "Wild Dog" Ramirez, who was the mayor of The Glades in the original 2040 timeline.

Star City has a vigilante museum, which just received a $1 million donation from Victor and Maria Bertinelli.

In the new 2040, Oliver and Felicity's daughter Mia goes by Mia Queen rather than Mia Smoak.

In the new timeline, Mia has just graduated from college. In the original 2040 timeline, she ran away from home before graduating high school. She was also raised as part of the upper class.

Mia lives in Queen Manor, which was apparently restored and purchased by Felicity Smoak at some point in the last 20 years.

In the new 2040, John Diggle Jr. goes by JJ and is an art gallery manager rather than a gang leader.

JJ proposes to Mia. She accepts.

Dinah Drake is living in Star City 2040. She owns her own piano bar and lives in the loft above it.

Dinah says that she woke up in Star City 2040 the day after Oliver Queen's funeral. She also discovered there was no record of her ever having existed or there being a Black Canary in the post-Crisis timeline. She later says she felt it was the universe's way of telling her that she wasn't needed, despite her Canary Cry also being restored following the Crisis.

Sara Lance found Dinah living in 2040 and offered to take her back. Dinah decided to stay in the future.

There have been no major crimes in Star City for 20 years.

Bianca Bertinelli is a famous socialite and the adopted daughter of Helena Bertinelli.

According to Laurel, all hell breaks loose in Star City three days after Helena Bertinelli is found dead after being kidnapped.

The ring JJ proposed to Mia with belonged to Felicity and it's the same one Oliver proposed to her with. She says she knew she'd want to wear the family ring.

William Clayton says he's going to be the Man of Honor at Mia's wedding. He is revealed to be running Smoak Tech in the new reality and just broke up with his boyfriend, Keven. (I.E. The villain from the flash-forwards of Arrow season 7)  Apparently Keven didn't want to be tied down to one boyfriend.

Zoe Ramirez crashes Mia's graduation party, but Mia doesn't mind. This confirms that Zoe is alive in the new 2040 reality, but she is not part of the Canary Network since there is no Canary Network and there was no Dinah Drake around to train her as a child.

Connor Hawke crashes Mia's graduation party and Mia does mind, asking if he's out of rehab and if he's going to start a fight or set something on fire. Apparently, in the new reality, Connor is the bad son of the Diggle family, rather than the pre-Crisis future where he was an agent of Nightwatch and Mia's lover.

Laurel restore Mia's memories of the pre-Crisis world with a device built my Cisco Ramon.

Dinah was married when she was 21.

According to Mia, Helena Bertinelli was a great mother to Bianca before Helena disappeared mysteriously. Since then, Helena has lived with her great-aunt and uncle.

Logan Bertinelli is Bianca's cousin who is involved in some shady business.

The vehicle they think is holding Bianca turns out to be carrying drugs or chemicals of some kind. Mia doesn't recognize them, but they look suspiciously like Mirakuru - the miracle serum that turned Slade Wilson into Deathstroke.

The vehicle is blown up by a man in a Deathstroke mask.

Mia hacks the computers in JJ Diggle's office based on Laurel's instance he must be this new Deathstroke. The only secret she finds is hat he was planning a vacation to Fiji for their honeymoon. He later breaks up with her because of her apparent distrust of him.

Trevor is revealed to be the new Deathstroke and he only kidnapped Bianca because she dumped him.

Trevor has a tattoo on one wrist that resembles the emblem on thee Queen family hozen. He makes reference to a boss who is a woman.

Bianaca is saved and informs everyone that a new Green Arrow saved her. She does not, however, mention them being a woman. This leads the press to ask William if he's the new Green Arrow, much to his amusement.

Laurel confesses to Dinah that the real reason she pushed Mia to recover her memories was because Mia was blamed for Star City falling apart within the next year and was called "The Woman Who Failed Star City." in one 2041 article.

Mia and JJ reconcile, but it looks like the wedding is still on hold.

Laurel temporarily moves in with Dinah, but says she plans to get a place of her own.

Dinah announces her intention to set up the Canary Network in the new Star City 2040 and asks Laurel to help.

William is kidnapped by a group who knock Mia out and leave her behind as the two were meeting before the bronze statue of Oliver Queen as Green Arrow in one city park.

The episode ends with someone using the same device that Laurel used on Mia on JJ Diggle, restoring his memories of being leader of the Deathstrokes

We know virtually nothing of what happened to the heroes of Star City post-Crisis, apart from Rene Ramirez (maybe)eventually becoming Mayor of Star City and Dinah being sent forward in time.

There's an implication that Black Siren knew Huntress and worked with her in the revised timeline as she makes reference to Helena having old enemies. Could there have been a Birds of Prey team sometime in the gap between 2020 and 2040?

Between her refusal to accept that JJ Diggle might be a good guy in the new reality and her general lack of competence throughout the episode, it's fair to say that Black Siren/Laurel Lance isn't a very good vigilante.

If it weren't for its connection to Arrow, it would be an easily forgettable, wholly generic action series pilot of the same school as VIP and Cleopatra 2525. Inoffensive, but hardly likely to encourage enthusiasm for the spin-off, particularly since Black Siren seems to have regressed into her formerly catty self and Dinah Drake is an after-thought, as usual.
Posted by Starman at 1:58 PM