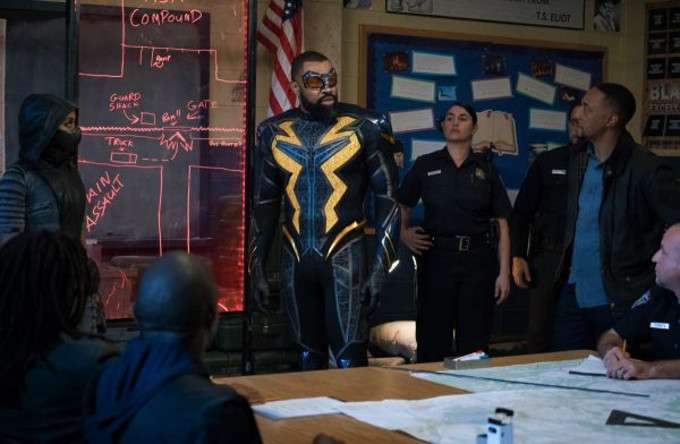 With the Crisis averted, Jefferson returns home to Freeland to find nobody but Jennifer remembers the anti-matter storms that destroyed their world. They both have bigger concerns, however, as Anissa runs afoul of an ASA ambush as Blackbird, Brandon's earth-bending powers trigger an earthquake and the depths of Lynn's drug use finally become apparent. Throw in a desperate Agent Odell readying to weaponize all of the captive Green Light Babies and Pod Kids and Freeland needs its heroes more than ever.

The scene in which Jefferson confronts Lynn and discovers her drug use is a career high for both Cress Williams and Christine Adams. The former perfectly captures Jefferson's anguish as he's torn between his responsiblity to the community and his pain over the woman he loves destroying herself and Adams plays a credible addict.

The episodes use of music to establish mood is fantastic.

Gambi says that both Jennifer and Jefferson have anti-matter particles on them, which should be impossible according to everything he knows about science. He suggests that the nature of their powers and how they react to energy are what allowed them to experience whatever they experienced during the Crisis. This is probably why Jennifer remembers the old reality, despite not having her memories restored by Martian Manhunter, like her father did.

The side-effects of Green Light addiction include hallucinations, agitation, sweats and dry mouth.

Jefferson: (into his comms) Gambi? Gambi, I don't know if you can hear me, but if you can, you're not gonna believe what happened. I traveled to an alternate dimension. I met other metahumans... a kid named Flash. Gambi, Superman is real! We saved humanity. Multiple humanities, actually. (sighs) A lot happened. But I just kept thinking about you and Lynn and the girls and... and Freeland.

Jefferson:  Don't you think it would be better to help the Resistance as Thunder?
Anissa: No, I don't.
Jefferson: Thunder is a clear symbol of justice. She's selfless, saves people. Blackbird steals money from drug dealers and does other questionable things.
Anissa: Oh, come on, Dad, stop. I need to lead this. Black Lightning is not the face of this Resistance.
Jefferson: Whoever said he was?
Anissa: You did. The moment you came in and just took over. Now, I know you have done this a million times, but I'm running this.
Jefferson: Anissa, I didn't take over. Henderson asked for my advice. And I gave it.
Anissa: No, I had everything under control until you came in with your male privilege, and you just pushed me aside.
Jefferson: Male privilege? What are you talking about? I'm your father. And this isn't about you.
Anissa: Yes, this is about me.
Jefferson: No. If we get this wrong, people die.
Anissa: Yes, Dad, I know that. And I also know that this is hard for you. But I'm so much more than just your daughter and Thunder, and you need to see that. I am a leader, and I can handle myself.
Jefferson: I know you can handle yourself, I know that. But you haven't always made the best choices, and I haven't said a lot about it, but you have done some very questionable things.
Anissa: Okay, okay, I've made some mistakes, and so have you. But so what?
Jefferson: Mistakes? You use money you stole from drug dealers for yourself. That is not a mistake, that's just wrong.
Anissa: Now is not the time for us to focus on that. We have a mission to take care of, and what I need from you is support. I need you to trust that I'm gonna make better decisions after the bad ones that I made. That's what I need from you, Dad. Can you do that?
Anissa: A lot of people are counting on you.
Jefferson: Yeah, I know that. And I need you to be one of those people

(Brandon and Jennifer are hiding behind some crates by the docks.  A black SUV moves past them.)
Brandon: Hey, can we go now?
Jennifer: Almost. I'm about to end this, once and for all.
(The SUV stops and Jennifer approaches it. The window in the back passenger side of the vehicle rolls down. Agent Odell is seated inside.)
Agent Odell: Happy you finally called, Ms. Pierce.
Jennifer: I'm not working with you anymore. And I'm not your weapon.
Agent Odell: You don't have a choice.
Jennifer: Wrong answer.
(Jennifer's eyes flash orange and she lifts her hand, sending a bolt of lighting into the car. The energy passes through Odell, who regards her unblinking as his image begins to blink like an unstable television signal.)
Brandon: Whoa. That's a hologram!
Agent Odell: (mock cheerful) This isn't over, young lady.
(The window rolls up as we see the SUV doesn't have a driver. It moves off on its own. Jennifer is too stunned to do anything to try and stop it.)
Brandon: Who's that?
Jennifer: The devil.

Jefferson flies back to Freeland under his own power, using his abilities to create an opening through the forcefield into Freeland.

Jennifer falls through an unidentified void she thinks is the safe-space inside her head she was trained to go when she was mastering her powers.

Jennifer has had a revelation, after her visions of the other Earths, that Agent Odell was using her and he has to be stopped.

Jennifer materializes on the patio at Anissa's apartment, just as Jefferson arrives there.

Jefferson persuades Jennifer to come with him to Gambi's first before going after Agent Odell, pointing out that the suit he made her probably has safeguards that can be turned against her.

Gambi has no memory of the Crisis or Jefferson or Jennifer disappearing. He also claims to have never seen the ASA-made costume that Jennifer is wearing before. This confirms that the events of 309 didn't take place from his perspective.

The ASA have begun searching the tunnels Blackbird had been using to get around Freeland undetected. Jefferson goes to save her from an ambush while Jennifer goes to check on Lynn.

Gambi suggests that until they have a chance to deal with current events, Jefferson and Jennifer shouldn't say anything about reality being rewritten since they have no way of knowing how the universe might have changed from what they know.

Lynn is at a chemistry lab at Bowman College, trying to make more Green Light.

The Freeland Resistance in the new reality seem to be better organized than they were Pre-Crisis, with more ordinary citizens being part of the movement rather than it being made up of cops, criminals and a few of Reverend Holt's followers.

The Freeland Resistance is said to be occupying several blocks of the city, including the area around Garfield High School.

Agent Odell is back in active command of the ASA forces in Freeland.

The ASA scientists have proven unable to stabilize the metahumans in their custody without Lynn's supervision. At the best guess of the scientist running things at present, no more than 60% of the metahumans would survive the conversion process into soldiers.  Major Grey tells him to start converting them once they get the process to 80% stability.

According to Major Grey, the Freeland Resistance has managed to disable 15% of their vehicles and 25% of their soldiers.

Commander Williams, whom Jefferson defeated in 308, is said to still be recovering.

The Resistance has successfully prevented the materials needed to turn the detained metahumans into super-soldiers under the ASA's control from being delivered from The Pit. This makes Odell give the order for the Pod Kids and Green Light Babies to be transported to The Pit.

Jefferson saves Anissa from the ambush.

TC is able to use his powers to locate Gambi and talk his way into his secret room behind his tailor shop.

An earthquake shakes Freeland, which Jennifer realizes is the result of Brandon losing control of his powers.

Lynn give Jennifer some drugs that can stabilize Brendan, refusing to come with her to administer them herself and all but pushing Jennifer out the door so she can return to making more Green Light.

Jennifer calls Jefferson and tells him he should check on Lynn because something is wrong, but she's got to stop the earthquake.

Jefferson agrees to catch up with Anissa later as he checks on Lynn, as she just got work from the Resistance that the ASA is about to try moving the captive metahumans.

Gambi agrees to take TC in and offers him a place to stay, as his usual hiding place was being searched by the ASA.

Jefferson finds Lynn at their home, tearing everything apart trying to find more of the Green Light drug she might have left behind.

Henderson calls Jefferson as he's in the middle of trying to reason with Lynn. She escapes into the night as Jefferson is trying to balance both discussions.

One of the ASA soldiers, Travis, is fitted with the same chips used to control Painkiller. This make him "fighting fit" despite his doctors not being sure he's mentally fit to return to duty. Travis is assigned to be second in command on a mission to capture Jennifer Pierce.

Jefferson and Anissa have a talk about him stepping on her toes and leading the Resisance movement she built. Jefferson says he can't help people looking to Black Lightning for leadership, but agrees to scale back and follow Anissa's lead and lack Blackbird call the shots openly.

TC discovers the secret room holding all of Black Lighting and thunders' gear in Gambi's backroom.  He says that Gambi's computer wanted to show it to him.  He promises to keep the secret.

Gamti says that he might make TC a costume one day.

TC offers to help Gambi track down whoever put the hit out on him, using his power to talk to machines to work through the BitCoin protections

Jennifer and Brandon are tranquilized by a sniper rile while hiding in Brandon's apartment.

The Resistance rescues all of the Pod Kids and Green Light Babies that were being transported.

Jennifer is able to short-circuit the power-repression collars she and Brandon are wearing. They make their escape from the ASA transport, but Jennifer seems to kill Travis, due to her powers interacting badly with the chip controlling his mind.

TC passes out while hacking the last round of encryption. As he goes under, he pulls up a picture of the person who paid for the hit on Gambi - it is Lady Eve, who was originally killed off in the pre-Crisis timeline in 107.

Jennifer calls Agent Odell in a bid to get him where she can kill him. Instead, she attacks a robot car with a hologram of Odell inside it.

A solid episode which neatly establishes the new status quo in Freeland. Not much has changed, apart from the Resistance seeming more together, but the idea that Lady Eve is back (or at least someone is manipulating her organization) suggests things are about to get interesting in Freland's underworld very shortly. If this means we get more of Tobias Whale and finally get back to whatever Lala started doing at the start of the season, I'm all for it. As it is, this is a good start and a solid jumping on point for new viewers.
Posted by Starman at 5:09 PM