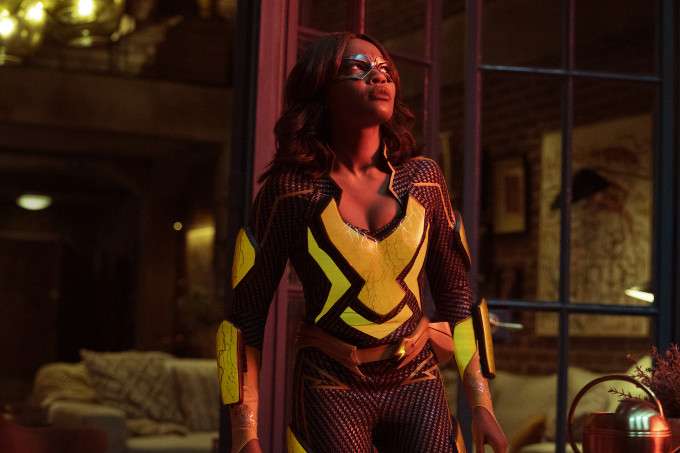 As strange energy storms turn the skies red, Jennifer finds herself losing control of her powers and winding up somewhere else. As she sees two different versions of herself in two drastically different worlds, her family struggles to save her ever-phasing body, as the ASA move to destroy Freeland's Resistance once and for all.

China Anne McClain owns this episode, from her wonderful performance with the opening monologue to all the scenes of her playing three different versions of Jennifer Pierce.

The subtle light washes used to denote Earth-1 and Earth-2 are nicely executed.

The number 333 is a reference to balance between mind, body and spirit.

Gambi detects massive amounts of anti-matter in the skies over Freeland, because of the strange storms. Since Jennifer's powers convert her cells into pure energy, she's been effected by the strange energy fluctuations. This has somehow allowed her to be in two places at once, letting her see the events in alternate realities.

Gambi determines that the surges in anti-matter correspond to Jennifer phasing away to another universe.

Gambi says the ASA lacks the ability to generate anti-matter, much less fill the sky with it.

Earth-1 Lynn: He always talked about how proud he was of you. About how many lives you'd saved.
Good Jennifer: Except his.
Earth-1 Lynn: No, Jennifer, he was proud because you did something he couldn't. You brought peace to Freeland.
Good Jennifer: Yeah, but, but what kind of peace is it, when Odell can just walk into our house and kill Dad like that? What kind of peace is it?

Earth-2 Jefferson: Jen, how do I get you to see that your powers are a drug? And you are addicted. The more you use them, the more I lose you. The more you lose yourself.
Bad Jennifer: The people of Freeland need me. And you could have stopped this years ago, but your philosophy and your code? It stopped you and now look where we are. So I tell you what, I'm gonna clean up this mess you made, so that I can finally lead a normal life. Something that you could never provide for me or anyone else, for that matter. A life of peace.

Jennifer: You know, I used to wish that my powers would just go away. 'Cause I thought everything would do back to normal if I didn't have 'em, if nobody had 'em. But then I realized, there is no such thing as normal.

For three nights in a row, Jennifer has woken up at 3:33 am.

Jennifer is feeling conflicted about working with Odell, while knowing most of her family is with the Freeland Resistance. She decides to tell Anissa about this in person, rather than venting her feelings in a video message she doesn't plan to send.

Rebecca Larsen is a conservative news pundit with a show called The Larsen Line on a news network called GBS (Global Broadcasting System). She reports that the government is lying about a SARS outbreak in Freeland but says the Resistance fighting against them is made up of liberal anti-vaxxers.

It is revealed that the ASA somehow intercepted the broadcast Gambi sent out in 308, with only part of the message regarding what was really going on in Freeland making it to the major news networks.

Agent Odell contacts Jennifer through her TV at the Pierce home and asks her to patrol the perimeter around Freeland and pick off any Markovian soldiers she sees.

Anissa tells Jefferson that she was attacked by Painkiller in 305 and that he's somehow still alive.

The skies turn red as Jennifer is waiting for Anissa at her apartment.

Jennifer passes out as the odd lightning storms start after the skies turn red, as the energy around her goes crazy.

Good Jennifer goes by the nickname Gen and her world is labeled as Earth-1.

Bad Jennifer goes by the nickname Jinn and her world is labeled as Earth-2.

Good Jennifer somehow used her powers to alter the water in Freeland so that anyone who had the metagene who drank it would lose their powers. This angered Agent Odell, who had her arrested, collared and locked in The Pit.

Bad Jennifer is loyal to the ASA and Agent Odell.

The Earth-1 versions of Jefferson and Anissa are now regular humans.

The Earth-1 version of Jefferson Pierce is the Secretary of Education. He apparently took the job to distance himself from his "terrorist" daughter, even though he knew what Jennifer was planning to do and supported her actions privately.

The Earth-1 version of Anissa Pierce is still in the closet regarding her sexuality and hasn't come out to anyone but Jennifer yet.

The Earth-1 version of Anissa Pierce is planning to tell her parents that she's a lesbian, as she must met a woman - another medical student named Shaquandalyn and things are getting serious.

The Earth-1 version of Khalil Payne is still alive and never became Painkiller. He just earned a full athletic scholarship to UCLA and is still waiting for Jennifer, despite her being largely locked up in The Pit. Jennifer expects they'll finally break-up when he has to leave for California next August.

Jennifer has been released from The Pit for the holidays, but still has several years left on her sentence.

The government of the USA on Earth-1 is apparently run by some kind of High Council. They required that Jefferson ensure that only the ASA approved version of history was taught in the schools and that all suspected metahumans in the schools were turned over to the ASA.

Earth-1 Jefferson is executed by Agent Odell, after it is revealed that he and Reverend Holt were running an underground railroad for metahuman kids.

Good Jennifer is taken back into custody, as Anissa is left to cry over Jefferson's body.

Earth-1's version of Lynn Stewart never visits Jennifer in The Pit and is usually busy with work. This drove a wedge between her and Jefferson, making their romance even more of an on-again/off-again affair than in the main universe.

Anissa finds Jennifer passed out in her apartment and calls Gambi.

Gambi learns about the new costume the ASA made for Jennifer.

Jennifer is fading in and out of existence, as she sees the events in Good Jennifer and Bad Jennifer's worlds occur.

Gambi tells Anissa about how he broke Lynn out of The Pit and how they tried to lock her in it during the events of 308.

Lynn is in a make-shift lab, attempting to make more Green Light for herself.

Earth-1 Lynn visits Jennifer in The Pit and tries to comfort her by telling her Jefferson was proud of her and how she did what he couldn't; bring peace to Freeland. Jennifer notes bitterly that it wasn't much of a peace if Jefferson could still be gunned down and she really wondered if it was worth it, even if her actions did stop Freeland from being turned into a breeding ground for super-soldiers.

Chief Henderson calls Blackbird's phone and tells her that the Resistance is going to need her or Black Lightning if they are going to survive the night.

Jefferson agrees to back-up the resistance.

Earth-2 Jefferson Piece tries to tell Jennifer that her powers are a drug and she's become addicted and Odell is exploiting her. Jennifer responds that she and the ASA have done what he never could with his morality and code; bring peace to Freeland.

Black Lightning destroys the ASA HQ in Freeland, leaving The Pit as the only operational base they have. The perimeter is still intact, but this action causes Agent Odell to order that every detainee in the meta camp be given a brain control implant and be put into the field.

Bad Jennifer destroys the metahuman refugee camp in Freeland and kills all the metahumans, saying there's no need for them anymore now that the war with Markovia is over.

Anissa tells Gambi and Lynn that Painkiller is alive.

Lynn admits that she already knew Painkiller was alive and in the employ of the ASA.

Anissa wants to put Painkiller down but Lynn wants to try and save him.

Gambi intercepts an ASA message outlining Agent Odell's plan to weaponize the Green Light Babies. Anissa says she has a plan to stop them.

Bad Jennifer kills Earth-2 Jefferson, Lynn and Anissa after they try to convince her to turn herself in for murdering all the innocent people in the metahuman camp.

Jennifer dissipates into a cloud of particles.

Gambi, Anissa and Lynn are erased by the wave.

It is unclear if Anissa did anything to stop the Green Light and mind-control modules from getting to the ASA camp.

A bit all over the place. The story on Earth-1 is interesting and far more developed than the Earth-2 subplot. Jennifer's conflict is well-handled, but everything involving the Freeland Resistance is almost an after-thought compared to a forced tie-in to Crisis on Infinite Earths that really has nothing to do with the event.  Hopefully we'll get to see the actual battle between Black Lightning and Thunder and the ASA next time, because it's really anti-climactic to have Jefferson destroy the ASA HQ off-camera and for nothing to come of last week's big cliffhanger, with the truth about Freeland being broadcast to the outside world.