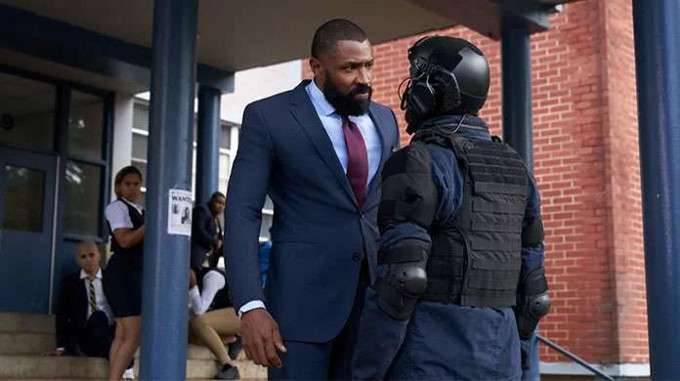 The hunt for Blackbird intensifies, as Jefferson takes it upon himself to bring Tavon home to Freeland. Meanwhile, Lynn has a major breakthrough in her search for a way to stabilize the metagene but it requires her dealing with the last person in the world she wants to see - Tobias Whale!

The Outsiders comics of Judd Winick (Grace and Anissa's romance)

The scene of Erica dying, leaving behind nothing but smoking shoes is cartoonish.

Marvin "Krondon" Jones III saves this episode, conveying the menace of Tobias Whale's character even as he's helplessly strapped to a gurney.

Lynn sais that Dr. Jace created the metahuman virus as a means of sending Lynn her research, which was sliced into the DNA of the virus, which she had already developed her  own vaccine.

On closer examination of the virus' RNA, Lynn determines that Dr. Jace used a gene-editing tool to send her a specific amino acid chain.

Twenty amino acids make up a protein chain. The protein created by the specific chain Dr. Jace discovered was a byproduct of a serum that was the predecessor to the metagene-triggering vaccine in Green Light. Once it's metabolized in a human host, it strengthens the mitochondrial membrane potential of meta cells significantly. In theory, Lynn can use this to stabilize the metagene. The only problem is the chain can't be synthesized - it has to be taken from the host who developed the chain naturally.

Replenishing electrolytes is the best way to beat a hangover.

Painkiller: (To the ASA sergeant that insulted him that is now choking on his poison) Do you have kids, Sergeant? A religious man, perhaps? You see, I often ponder my victims' last thoughts before they die. And the truth is it's fascinating to me.

(Henderson is questioning Two-Bits about stolen ASA property he's been reselling.)
Two-Bits: Why are you hounding me anyway?
(Henderson holds up an evidence bag. In it is the tomato that Two-Bits threw at him earlier.)
Two-Bits: Hey, I did miss.

Henderson: You haven't seen anything out of sorts lately, have you?
Rev. Holt: If I saw something, I'd have said something.
(Rev. Holt chuckles nervously.)
Henderson: Mmm-hmm. The trouble is, all my leads end right here in this church. You care to explain?
Rev. Holt: I have no earthly idea. I suppose those with the most sin cast the first stone.
Henderson: Well, I'm not the one smuggling the metas outside of Freeland. (smirks cutely) All aboard! Choo-choo!
(Rev. Holt's face freezes up in realization.)
Henderson: Yeah, I thought that might ring a bell.
Rev. Holt: Now, now, come on, Chief. Listen You don't think I'm human trafficking? Huh?
(Rev. Holt laughs. Chief Henderson clearly isn't buying it. Suddenly, Holt goes all fire and brimstone.)
Rev. Holt: I am down here saving these poor souls. These people have rights. Chief Henderson, they have rights!
Henderson: Reverend Holt, you have the right to remain silent. A right that I know that you will waive.
Rev. Holt: Now, you hear me, Chief Henderson. You cannot arrest me here. We are in the house of the Lord. And He sees all!
Henderson: Yeah. Between me and you, Reverend, He's seen worse.

Tobias Whale: I recently found myself with a lot of time to contemplate what got me in this godforsaken pit. And all I can come up with is Black Lightning always showing up whenever your daughters are in trouble. Once is chance. Second time is coincidence, but a third? Now, that's a pattern.
Lynn: Black Lightning saves a lot of lives in Freeland.
Tobias Whale: This is true. But after that boy your daughter was dating got his spine ripped out, some new female firecracker-type superhero appeared and lit my ass up. With Black Lightning's help, of course. Do you see the pattern?
Lynn: Only the musings of a lunatic.
Tobias Whale: Humor me. Answer this lunatic's one question. (smiling wickedly) What's your super suit look like, Dr. Stewart?

(Henderson pulls out his phone and shows Two-Bits and Rev. Holt a video a student shot of Jefferson Pierce being beaten by the ASA.)
Henderson: Tavon Singley and Jefferson Pierce are the spark we needed.
Two-Bits: "We"?
Rev. Holt: What exactly are you saying?
Henderson: The people of Freeland are ready to fight now. We've all been working independently, nickel-and-diming these bastards, but it's time to join forces, run the ASA out of here, take our freedom back.
(The rest of the Resistance leadership come out of the shadows behind Henderson)
Two-Bits: So, you've been leading the insurgents this whole time?
Henderson: I'm just a man trying to do what's right. Join us.
Rev. Holt: We'll be crucified if we try to take the ASA on by ourselves.
Henderson: But who said we by ourselves?
(Blackbird emerges from behind Rev. Holt and nods to him.)
Rev. Holt: "And the scales fell from his eyes, turning Saul to Paul."
(Rev. Holt extends his hand to Henderson, who shakes it.)
Two-Bits: (chuckling) My man.

Tavon films a video for his parents from the commune he's working on in South Freeland. He notes that he'd never seen the stars before now and how the metahumans and ordinary people in South Freeland are working together.

Agent Odell uses facial recognition software to try and identify Blackbird. He seems to have figured out that she is Anissa Pierce.

Painkiller nearly kills an ASA Sergeant who insulted him while sparring.

Lynn has a dream that she was running experiments on a girl named Erica who had the power to absorb kinetic energy, effectively making her bullet-proof. She told Erica to release the energy and Erica made herself explode, leaving behind only a pair of smoking shoes. It's unclear if this was a nightmare of something that did happen or something Lynn feared would happen.

Truthteller Johnson delivers a broadcast, describing how the assault on the Freeland PDHQ in 304 was not the work of Markovian terrorists, as the ASA is now claiming, but Blackbird leading a raid to free non-metahuman citizens that were being illegally held.

Jennifer is feeling sick, her perception of things being slowed down. She wants to take a sick day, but Jefferson feels her forehead and cheek and says she feels fine.

Lynn says that she's been having recurring dreams of severed feet. She eventually realizes this is her subconscious trying to tell her that Dr. Jace left a message for her in the DNA of the metahuman virus.

Lynn determines that Tobias Whale (ASA Patient 49) has an amino acid chain in his DNA that could be used to stabilize the metagene in other people.

Acting Police Chief Henderson announces that Blackbird is now wanted in connection with the attack on Freeland PDHQ. The ASA is now offering a $50,000 reward for her. Two-Bits throws a tomato in his general direction once the press conference is done.

Tavon's parents meet with Jefferson. They believe that the ASA killed Tavon and are covering it up. Jefferson promises he'll see what he can do

Anissa gives Grace the vaccine for the metaplague.

Gambi has been watching over Grace to make sure she doesn't lose control of her shape-shifting when Anissa isn't around.

Jennifer is feeling chills and accidentally triggers a power surge in the computer lab at school. When asked about why she looks bad, she tells her friends that "I was flying high on pure energy last night, and now I feel like gravity's crushing me." They don't realize she's being literal.

Acting Chief Henderson arrests Two-Bits after determining he's been stealing supplies from the ASA and reselling them.

Blackbird delivers more of the meta vaccine to Reverend Holt. She tells him to inoculate all the metas they're going to sneak out of Freeland that night and tells him to make sure everyone is wearing black.

Jefferson asks Anissa to bring Tavon back to Freeland. She says its a bad idea, but she'll see what she can do.

Blackbird delivers the meta vaccine to South Freeland and asks Tavon if he wants to go back home  to Freeland with her.

14 of the Pod Kids died under Lynn's care.

MB4 is the official ASA designation for the serum that gave Tobias Whale eternal youth and super-strength. Lynn gives him a dose of it to save his life so

Painkiller attacks Tavon and Blackbird as they are coming through the ASA perimeter into Freeland. They are able to escape, but not without both being poisoned.

Agent Odell calls upon Anissa's apartment hoping to find her sick with Painkiller's toxin. He is instead greeted by a perfectly healthy Anissa. This is really Grace shapeshifted to look like Anissa.

Tobias tells Lynn that he's figured out that Jefferson is Black Lightning.

Tavon succumbs to the poison and dies in Black Lightning's arms.

Lynn asks Agent Odell to "disappear" Tobias after she is done with him.

The rumor going around Garfield High is that Tavon was shot by the ASA trying to escape Freeland.

Jefferson intervenes after a group of students confront the ASA soldiers over Tavon's death and one of the soldiers hits a boy in the face with the butt of her rifle.

Brandon has something to ask Jennifer, but the question is forgotten as a fight breaks out between Jefferson and the ASA soldiers.

Shots are fired into the air and the soldiers begin beating Jefferson as the students look on in horror.

Brandon holds Jennifer back from getting involved as her powers spark. Somehow, he absorbs the energy she's generating into himself.

Agent Odell says that he marched with Dr. Martin Luther King Jr. when he was younger.

Agent Odell allows Jennifer to attack the soldiers who beat up her father.

Inspector Henderson takes Two-Bits and Reverend Holt to a meeting of Freeland's Resistance, revealing himself to be its leader. They agree to all work together, using Tavon's death and Jefferson's beating as a rallying point for the people of Freeland.

A complete game-changer that salvages the season so far, by putting the show's best supporting cast front and center and looking at the big picture instead of all the smaller subplots that had been all but forgotten over season 2. We have gone through the tunnel and there is light at the end!
Posted by Starman at 8:04 AM