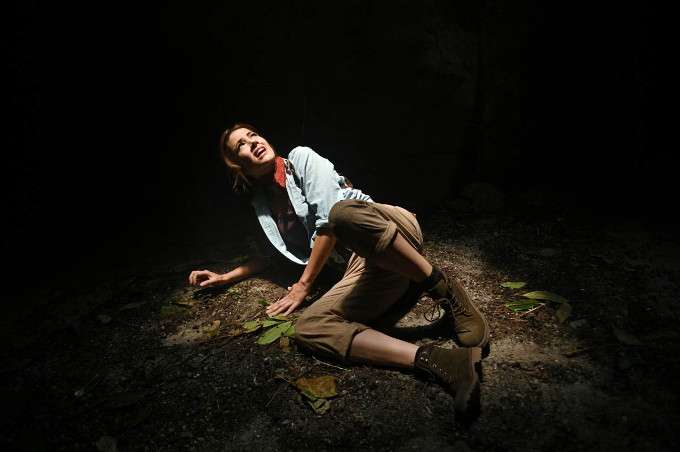 With Rip Roar in custody, Kara and Alex start trying to find a way to figure out who is employing the cyborg assassin and how Russell Rogers came to be transformed into him. Meanwhile, Andrea approaches Lena to ask for a favor, as the tortured history between the two former friends is revealed.

Katie McGrath has an excellent turn here as Lena, managing to seem sympathetic as her heart is broken over and over, even as she does some truly awful things in response.

Andrea Rojas is loosely based on a Mexican superhero from the Superman comics. First appearing in Superman Annual #12, Andrea Rojas was Acrata and had the power to teleport through shadows thanks to her possession of an ancient Mayan symbol. She was also a talented martial artist and detective, who was said to be the Batman of Mexico City, though she did not work with the local authorities and indeed had a deep disrespect for them. She was also the daughter of a former politician, who became a professor of pre-Hispanic cultures at the University of Metropolis campus in Mexico City.

The biotech that transformed Russell Rogers into Rip Roar is capable of overriding the powers of a Truth Seeker. The technology is so well-ingrained into his body that removing it could kill him.

Lex Luthor plans to kill Superman by seeding Earth's atmosphere with Kryptonite. He can't do it yet, however, because he has yet to find a to sublimate the element into vapor.

Andrea: Every time I look at you, I'm reminded of all the horrible things I've done.
Lena: Honey, every time I look at you, all I remember is pain.
Andrea: Lena, for so long I wanted to tell you the truth, but I was scared.
Lena: That medallion was the only thing that could've stopped my brother - and you knew that. Andrea: Everything I did, every decision was to save my father's life.
Lena: My brother was a homicidal maniac. A lot of innocent people are dead because of him, because of you.
Andrea: I am well aware of how much blood there is on my hands. And I'm so sorry.
Lena: Because you say you're sorry, it doesn't make everything better.

Rip Roar is said to have killed 18 people, before arranging an act of eco-terrorism.

Andrea Rojas is revealed to be the shadow assassin from 503.

Andrea tries and fails to break into the DEO base to get to Rip Roar.

Andrea goes to Lena and asks her for help.

Titanic was Andrea and Lena's favorite movie. Andrea saw it eight times in the theater. Lena saw it six times, though Lex mocked her endlessly for it.

Lena was told about the Medallion of the Acrata by her mother. The medallion was part of a legend about a girl whose village was being ravaged by darkness, so she went into the wild in search of magic that could help. She found the Medallion of Acrata and was bestowed great gifts so that she alone had the strength to bend shadow to her will. Lena has dreamed of finding the Medallion ever since.

Lena's mom wanted to find the Medallion of the Acrata and kept drawing the symbol everywhere - a tic Lena adopted.

Andrea promises to help Lena find the Medallion, if it is real.

Five years later, Lex is becoming obsessed with killing Superman at any cost and tells Lena from now on their LuthorCorps is focusing on finding a way to do that. If she doesn't like it, she can quit.

Five years ago, Obsidian Worldwide is in trouble, due to their company being heavily invested in a new phone that is doomed to be obsolete upon launch, thanks to a high tech phone launched by Max Lord's company. Andrea's father fears they will lose 70% of the company if he wants to stay afloat after.

Lex Luthor plans to kill Superman by seeding Earth's atmosphere with Kryptonite. He can't do it yet, however, because he has yet to find a to sublimate the element into vapor. This plan would later be used successfully against Supergirl in 402.

Lena discovers the symbol of Acrata while looking at satellite scans of Costa Rica which Lex was using to search for Kryponite. She thinks the site she found has the Medallion and asks Andrea to explore it with her.

Andrea accidentally falls into the temple and meets a man from Leviathan. He gives her the Medallion of Acrata and says that his group can save her father and his company, but she must keep it on her at all times, let no one know she has it, tell no one about his being there and someday in the future they will call upon her to do them a service.

Andrea lies to Lena about not seeing the Medallion once she gets into the cavern.

By an extraordinary coincidence, some undetected flaw becomes apparent in the new Lord Technologies smart phone, which causes it to explode. This saves Obsidian Worldwide's new phone line.

Four years ago, Lex Luthor is arrested for turning the sun red as part of a plot to kill Superman.

Jack Spheer, Lena's ex-boyfriend from 218, is briefly seen. In the flashback they are still together, and Jack takes her to London to get away from the scandal of what Lex did. It is here that Lena unexpectedly runs into Andrea, who is openly wearing the Medallion of Acrata.

Declaring her friendship with Andrea over, Lena breaks up with Jack so that she can take over LuthorCorp and try to redeem the family name, planning to move to National City and run the new LCorp from there. This sets up Lena's first appearance in Supergirl Season 2.

Shortly after her falling out with Lena, Andrea meets Russell Rogers. The two start to fall for each other.

Three years ago, around the time of the events of 204 (Kara just broke a story about the illegal alien fight club) Kara delivers some hacked L-Corp data to Lena and invites her to her game night.  Lena declines, still afraid to make new friends.

Three years ago, Russell and Andrea are celebrating their six month anniversary. They are both omnivores who love meat and hate vegan cooking.

The Leviathan woman confronts Andrea and tells her they need her to kill a man. If she doesn't do it, her father will be found guilty of insider trading and later be found dead of an apparent suicide in his cell. Andrea kills the man - a Governor Harper.

Two years ago, just after Cat Grant joined the Marsden administration, Kara runs into Lena at a cafe and again offers her friendship. This time, Lena agrees to have lunch with Kara.

Two years ago, Russell Rogers discovers the Medallion of Acrata on Andrea's dresser. Somehow, Leviathan instantly knows about this and threatens to kill him, until she convinces them he can be of use to them. This leads to Russell being changed into Rip Roar.

Lex Luthor was murdered by Lena 12 weeks ago.

The book containing the Legend of Acrata which Lena read as a girl is Stories of Adventure.

Lena made seemingly made amends with Andrea 8 weeks earlier, selling her CatCo as part of her plan to get revenge on Supergirl.

Rip Roar gives Supergirl the name Leviathan, before Andrea spirits him away.

J'onn feels Lena's psychic blocker from across town and says it feels like Malefic.

Lena takes the Medallion of Acrata from Andrea and allows her to leave with Russell.

Lena analyzes the Medallion of Acrata and finds the name Leviathan worked into the text of it. She then asks Hope to tell her everything Eve Teschmacher knew about Leviathan.

A lackluster episode that reveals the secrets of a mediocre villain as a means towards setting up the season's real bad guy. Dense and plodding as it keeps throwing out references to make sure we know when all these scenes take place (though it's never clear where Andrea is after running into Lena in London) there had to be a better way to deliver all this exposition.
Posted by Starman at 4:46 PM