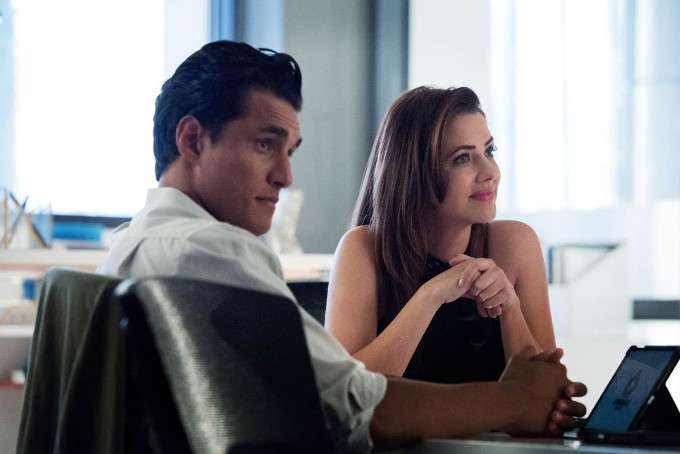 Kara tries to mend her friendship with Lena while adjusting to the new status quo at work and new demands upon her far outside her written job description at CatCo. At the same time, J'onn seeks Nia's help in working past the mental blocks on his memories as Kelly seeks to help an old patient, who is truly Malefic in disguise.

The Martian Manhunter comics of John Ostrander and Tom Mandrake and the Venom movie. (Concept of Aurafacians very similar to symbiotes.)

How did James change into costume and chase after Kara so quickly when she flew across National City to go after Caroline O'Connor?

David Harewood delivers one of his most powerful performances yet as J'onn.

Carl Lumbly has another brief, but anguish-inducing turn as M'yrnn.

It's a brilliant conceit having Nia picturing the Martians in J'onn's memories as humans because she's having to filter the memory through her own perception. This also eliminates the need for extensive CGI and make-up for a large group of extras.

The transmitter from the Obsidian contacts uses an ocular interface. Lena is trying to model it directly into the brain.

Q-waves should theoretically allow Lena to rewrite portions of the humor brain, but no matter how she manipulates the frequency the transmitter will only allow her to read information from the brain rather than implanting it. Augmenting the frequency only turns the subject into a zombie.

T'fek'lya is a Martian herb that helps those who take it to connect their minds telepathically.

Aurafacians are alien organisms that attach themselves to a host body. They can transform between a three-dimensional shape (usually an animal native to whatever planet they are on) and into a flat pattern that resembles a tattoo. In this form, the Aurafacian is basically liquid and can be treated like regular tattoo ink. This makes them difficult to track and even more difficult to capture.

The host of an Aurafacian is gifted with enhanced strength, endurance and the ability to fire blasts of webbing from their hands. This webbing is strong enough to contain Supergirl and can even suffocate her if piled over her nose and mouth. It can, however, be burned through.

James is armed with some sort of device that negates an Aurafacian's ability to generate webs.

Alex utilizes a device that uses the magnetic resonance in a Aurafacian's body to attract the heavy metals in their ink to draw them out of James' body after he becomes infected.

Brainy says the encryption used by the Aurafacians is more complex than anything that exists in the current time period, being on par with the encryption of his century.

Lex writes his journals in a variation of a Vigenere cipher - a deceptively complex polyalphabetic substitution key.

(Alex is arguing against Kara stealing Lex's journals for Lena.)
Alex: What you can't do is break the law and steal federal property.
Kara: Technically, I break the law all the time. I just broke into a Supermax prison two months ago.
Alex:  Okay. That is totally different. That's to serve justice. Right? Okay. What you're talking about here is crossing that line for a friend.
Kara: How is it different? (scoffs) She deserves to heal, and who would it be hurting? (sighs in annoyance) You know what? Brainy just illegally hacked into security cameras at a nightclub to help me solve Dr. Jarrod's murder. I don't see you scolding him.
Alex: Totally different. But... Yes, Brainy should not be using DEO tech to help you write articles. I will crack down on that.
Kara: Just want to point out. Who do you think we learned all this rule-breaking from?
(There is a long pause.)
Alex: That cuts deep.

(M'yrnn is in utter despair, praying desperately.)
M'yrnn: H'ronmeer, I failed you as I failed my own son! The agony in my heart.. It's unbearable!
J'onn: Father, you did the best you could for Mal. It's not your fault.
M'yrnn: He was my boy. My child. He could not control his illness. The test was mine and I failed! I do not deserve to live. And how can I continue to counsel our people when I myself am nothing?!
J'onn Father, our people need you. I need you.
M'yrnn:  (weakly) Then I have failed everyone.
J'onn H'ronmeer, forgive me.
(J'onn reaches out and touches his father and a blank look comes across his face.)

William Dey confronts Dr. Niles Jarrod in a nightclub and tells him it will end badly if he doesn't play ball with his organization.

Dr. Niles Jarrod was the man with Andrea Rojas in the photos William Dey was looking at in 502.

Dr. Jarrod is killed in the club's bathroom by a woman with several spider tattoos. One of her tattoos came to life and crawled into his heart.

Kelly Olsen says people have always opened up to her easily.

Hope tells Lena that Lex had been doing research on Q-Waves as a way to fight Superman. She says that three of his journals dealt with the subject, but are currently in a level five secure facility at Fort Summit.

Brainy has written 127 poems for Nia. When she says he shouldn't overdo it, he decides to move from sonnets to the villanelle.

Kara interviewed Dr. Jarrod for a piece on the moral implications of gene manipulation.

Kara hears William Dey's heartbeat become erratic when Kara suggests investigating Dr. Jarrod's death. This convinces her that the story is worth investigating and that Dey is involved in something sinister.

James has a contact with the Medical Examiner's office in National City and agrees to help Kara with investigating the Jarrod death story.

J'onn asks Nia for help in working past his mental blocks organically.

Malefic takes on the form of Pete Andrewes - a soldier with PTSD, whom Kelly treated once and hasn't seen in two years.

Lena's favorite snack is the coffee eclairs from Cafe Rue Serret on the Champs-Elysees? I know

Lena's favorite coffee is the cappuccino from Pave in Milan.

Lena's favorite scones come from a bakery in Dublin.

Kara flies around the world to get Lena's favorites for their lunch date.

Lena asks Kara if she could get Lex's journals for her, saying she's been having nightmares about Lex torturing her and that reading his writing and getting his thoughts in hear head seems to be helping by reminding her of the reality of who Lex was rather than the nightmare she built up in her head.

The official cause of death for Dr. Niles Jarrod was a heart-attack.

Kara finds a spider-tattoo on the inside of his heart with her X-Ray vision.

J'onn's memories reveal that Malefic was born with an inability to connect to the Martian hive mind. The other children teased him over this.

J'onn's memories also reveal that Malefic had some kind of telepathic power that forced his thoughts and feelings on others whenever he was scared or angry.

M'yrrn J'onzz responded to this by sealing Malefic away and praying for him. This did nothing to cure Malefic's condition and only served to further isolate him away from Green Martian society. This caused Malefic to side with the White Martians, who freed him from his prison.

According to J'onn, erasing the memory of a person's existence is the greatest sin in Martian culture.

Alex recognizes the tattoos on the woman who follows Dr. Jarrod into the bathroom, but not the woman herself.

Alex identifies the tattoos as a Aurafacian. She says it was one of the aliens Lex Luthor freed from the DEO desert facility two months earlier.

Nia realizes there was more to J'onn's memory than he let hmself see in their first encounter.

In the second encounter with Nia, J'onn sees that it is he who erased all memory of Malefic from the Green Martian hive-mind, because he couldn't cope with seeing his father so weak and near-suicidal over what he had done to Malefic.

J'onn swears Nia to silence over what she has seen in his memories.

Brainy figures out that the Aurafacian's is a Dr. Andrew Stern, who works at National City Hospital.

Alex is able to draw the Aurafacian from Caroline O'Connor's body, but a mysterious cloud of black smoke stabs her to death before she can say who hired her to kill the doctors.

Malefic is able to restore his telepathic powers thanks to Kelly's Q-Wave machine. However, their time together leaves Kelly with a connection to Malfic that lets her see through his shape-shifting disguises.

James goes into hiding with Kelly, to protect her from Malefic.

Nia asks Brainy to quit writing poems for her and to stop going to extremes. Brainy says he is just being himself and he can't NOT go to extremes for her, but he will leave her alone.

Kara gives James one of Lex's transmatter portal watches in case he needs a quick escape. She also tells James not to tell her or Alex where he is going.

Another lackluster episode where all the subplots gridlock trying to get the story set-up.
Posted by Starman at 1:12 PM