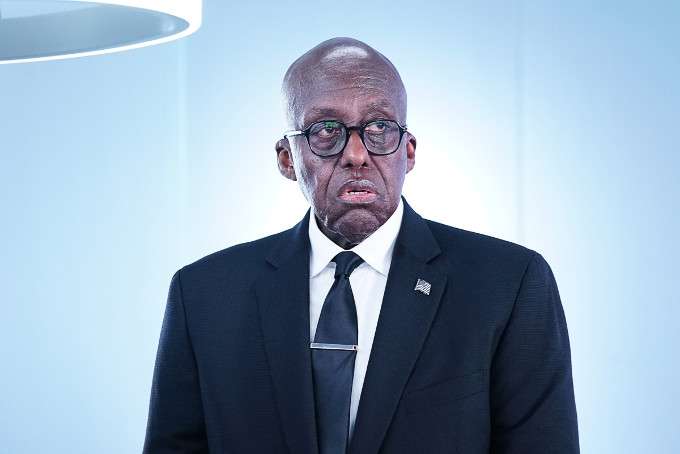 As Grace and Anissa have an emotional reunion, Jefferson makes a deal with Agent O'Dell that will win him his freedom.. Little do they know that O'Dell has made a similar deal with Jennifer and begun to consolidate his power over Freeland, as a plague breaks out among the incarcerated metahumans.

Bill Duke has never been creepier or more subtly intimating as Agent Odell as he is here.

It is possible to apply enough force at the right angle to snap both the fibula and tibia with one strike or twist.

The commotio cordis is a lethal disruption of the heart's rhythm caused by a single precisely timed blow, like hitting a person with a defibrillator.

Lynn says the virus killing the metahumans is made of mutations that she created and the only other person who knew about them was Dr. Jace.

(Agent Odell places a black jewelry box on the desk before Jefferson.)
Jefferson: What's that?
Agent Odell: Why don't you open it and see?
(Jefferson does so, It's a watch.)
Jefferson: It's a watch.
Agent Odell: Try it on.
Jefferson: Like I have a choice.
(Jefferson puts it on. Nothing happens.)
Jefferson: Doesn't work.
Agent Odell: Run some current through it.
(Jefferson flexes his arm. The watch lights up and shows the time.)
Jefferson: (sarcastically) Oh, hey, it tells the time. Great, thank you.
Agent Odell: It does a lot more than just that. That watch has more technology in it than the space shuttle, but it can only be activated with your unique skills.
Jefferson: But all I see is a watch.
Agent Odell: Hmm. Why don't you try to hit it with around ten volts and see if your perception changes?
Jefferson: But that'll fry it.
Agent Odell: (earnestly) Will it?
Jefferson: Okay. I'll humor you, okay? Ten volts.
(Jefferson stands and flexes again, electricity sparking along his bicep. Suddenly, cloth begins to materialize along his arm, forming a Black Lightning costume out of whole cloth.)
Jefferson: Wha-?
Agent Odell: This is the reason why we have you here, why we're testing you, why we're putting you through so much pain and struggle.
Jefferson: Oh!
(By this point, the costume is about halfway across Jefferson's torso)
Agent Odell: It's so we can create tech that will help all metas to live better. The Markovians are planning on killing or capturing all of the metas in Freeland. I cannot stop them without your help. If you help me with this, you can go home and be with your daughters.
(A pair of goggles forms on Jefferson's face. He looks down and flexes, the costume briefly lighting up as he runs a current through it. For the first time in a while, he smiles.)
Jefferson: Well, damn.

Tobias: Where's your truth boy?
Agent Odell: We had to let Issa go.
Tobias: So you killed him?
(Agent Odell says nothing. His face betrays nothing.)
Tobias: Makes sense. I'd have done the same thing. Can't have some kid running around knowing about all your dirt. Tell me, Agent Odell. Did you smoke him yourself?
(Again, Agent Odell says nothing. His face betrays nothing.)
Tobias: You did, didn't you? (laughs, with the laugh becoming a lingering cough) I knew you did.
Agent Odell:  We both know it's your fault that Issa is dead.
Tobias: You didn't want that boy dead, you shouldn't have put him in there with me.
Agent Odell: Point taken. Well played. (voice slowly becoming more intense and deliberate) But from now on, you will be dealing with me. And I promise you, you will tell me where I can get the information from that briefcase.
(Tobias coughs.)
Agent Odell: Oh. You know I just realized?
(Agent Odell sits down opposite Tobias and reaches into the inner pocket of his jacket. He pulls out an eyeglasses case and replaces his glasses with a pair of sunglasses with the same frames.)
Agent Odell:  You... You haven't been out of your cell in over a month. I owe you some time in the sun. Open.
(The ceiling starts to scroll away, letting what appears to be the light of a nice, sunny day into the cell. Tobias is too weak to do anything but squint up in annoyance.)
Agent Odell: My understanding is that one minute in this concentrated UV light is like an hour on the beach. If only you were more... melanated.
(Tobias begins screaming, trying to shield his face with his hands. His hands begin to blister almost immediately.)
Agent Odell: Let me know when you're ready.
(Agent Odell stands and leaves the cell, as Tobias continues screaming.)

Henderson visits Detective Sgt. King in the ASA camp. She tells him about the metahuman plague and that she has it, just before she drops dead. She also tells Henderson that there's a safe deposit box key in a false bottom in her locker and asks him to deliver its contents to her husband.

Agent Odell asks Lynn for her help in treating the metahuman plague.

Jennifer is asked to give new student named Brandon a tour of Garfield High.

Agent Odell gives Jefferson a watch capable of generating a new costume for him. He promises that if Jefferson can help him with rescuing an ASA team captured by Markovian soldiers outside Freeland and continue to help him protect the city, he will let Jefferson move back into his home wtih his daughters.

All the police officers in Freeland are being tested for the metagene.

The withdrawal on the anti-aging serum Tobias took is 10 times worse than coming off of heroin.

Agent Odell begins torturing Tobias with a concentrated UV lamp to get him to talk about Agent Proctor's briefcase.

Brandon is from Springbrook High and wears $1000 sneakers.

Jennifer makes reference to the events of the series pilot (her and Anissa being kidnapped), 112 (Painkiller attacking the school) and Tobias Whale ripping out Khalil's spine in 210 as she's giving Brandon the tour of Garfield High.

Painkiller is sent on a mission to hunt Markovians. He is eventually sent to 324 Oglethorpe.

Henderson is assaulted by a woman while touring Freeland with the newly elected mayor.

Agent Odell offers to help Tobias retake his old territory in exchange for the briefcase. Tobias turns him down.

Lynn determines that Dr. Jace created the virus that is killing the metahumans and that Cyclcotronic was probably the carrier.

Henderson delivers the money in the safe deposit box to Detective Sgt. King's husband, while delivering the news of her death.

Agent Odell visit Jennifer and tells her about the death of Nichelle Payne. He lies, however, and says a Markovian agent did it rather than Painkiller.

Agent Odell gets Jennifer to agree to help him destroy a Markovian data farm on the outskirts of Freeland and do some other jobs that will help them save the city.

Jefferson finds out the captive ASA soldiers were supposed to get captured and that he is meant to be fire-support on a mission to capture Dr. Jace. Unfortunately, she got away before the raid could be completed.

Grace is waiting for Anissa on the street outside the free clinic. The two reconcile and Anissa promises to help Grace get what she needs so she can stop stealing drugs and self-medicating to control her shape-shifting powers, which she says she's had since she was born.

Grace amicably splits up with the reporter Jamilla, saying she worked things out with her ex.

Jennifer destroys the data farm, clearing the way for Painkiller to attack a Markovian safehouse.

Tobias is now having nightmares of Black Lightning taunting him, saying he'll never get out of prison and never get back what he lost.

A smartly-written return to form, helped by a strong focus on Tobias, Bill Duke's performance as Agent Odell and Jefferson finally being allowed to do something.