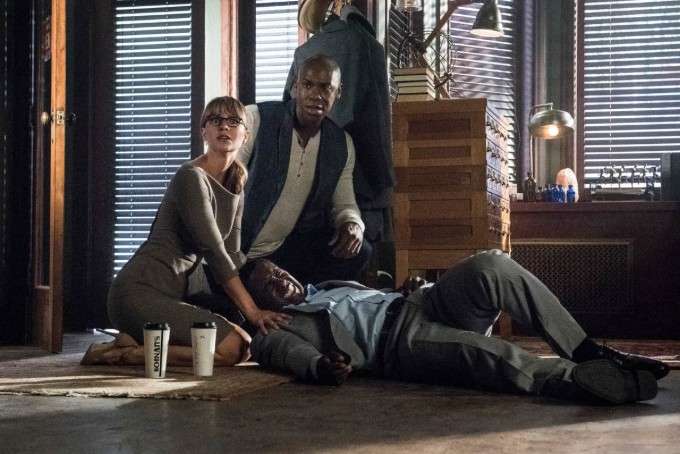 Faced with the mystery of a brother he has no memory of existing, J'onn turns to Kelly Olsen and her new mind-scanning technology at Obsidian Tech for help in sorting through his past. Kara, Alex and Brainy give chase to the mysterious Malefic, only for Kara to run afoul of her new co-worker William Dey, who seems to be stalking Kara. Meanwhile, Lena begins a new experiment with an unexpected test subject... Eve Teschmacher!

The Martian Manhunter comics of John Ostrander and Tom Mandrake.

It seems unlikely that Mars would have characters named Phobos and Deimos in their mythology, just like the Ancient Greek legends of Earth. (Phobos and Deimos are the sons of the war god Ares and gods of Panic and Dread respectively.)

The dubbing for James in his Guardian costume sounds ludicrous, being too growly and almost unintelligible.

Brainiac-5 makes reference to an alien race called the Euphorians, who he says have a similar brain structure to Martians. In the DC Comics Universe, Euphorians are the dominant species of the planet Euphorix. They resemble humans, save that some Euphorians have no pupils in their eyes and some have hair that is naturally pink or purple. Like humans, Euphorians do not have any innate superpowers, though there are members of the species who developed powers as a result of genetic mutation or alteration. Some Euphorians are also capable of utilizing magic.

J'onn makes reference to Malefic creating something called H'ronmeer's Curse, that killed off most of the Green Martians and eventually ended the Martian Civil War. In the comics, H'ronmeer's Curse was a psychic plague Malefic created that was passed through the Martian hive mind by any Martian attempting to telepathically link to another. This was due to Malefic being jealous and isolated, having been born without a Martian's natural telepathy. It was later revealed that Malefic did have telepathy at one point, but his memory and ability to use it were removed after he psychically raped his sister-in-law.

Fa'ra'too'rik is a psychic punishment inflicted through the Martian hive mind on brothers who fight one another physically.

Q-Waves are a form of radiation located between X-Rays and Gamma-Rays which are used in treating psychic trauma. Brainy says they weren't discovered until The Late Dark Ages, but is then informed that Kelly uses them as part of her work at Obsidian Tech. It should be noted that

Non Nocere is the Latin phrarse for "Do No Harm."

The VR lenses developed by Obsidian North create a link between what the brain sees and what it wants to see, creating a blank slate. Lena believes she can use this link to direct the blank slate to impose rules on the viewer.

Q-Waves scans maps and catalog a persons memories, creating pictures that depict the memories as a series of rings, like the rings on the base of a tree that has been cut down. The rings show breaks and irregularities at points where a person suffered from severe brain trauma.

Q-Waves are measured in biohertz. Doses of Q-Waves are administered in increments of 20.

A dose of 80 biohertz could permanently erase a person's mind.

One component of Obsidian North's contact lenses is a Lumus pixellator.

Lena: Hope, could you hurt someone?
Hope: I am incapable of causing pain. It is against my prime directive.
Lena: Exactly. Because you were built in the very image of perfection. You have no selfish inclinations.Your base code is morality, empathy, and logic. Humans and aliens, however, are flawed. They are driven by their emotions. They lie, cheat, and hurt each other to protect themselves. But it's not their fault, it's just how they're programmed. I am going to make them better with Project Non Nocere.
Hope: Do no harm.
Lena: I'm going to rid humanity of its instincts to hurt each other.
Hope: But you cannot reprogram organic creatures.
Lena: The VR lenses create a link between what we want and what we see, constructing a blank slate in the brain on which a new world can be projected. If I can find the source of that link, I can redirect the blank slate to have one single rule.
Hope: Non Nocere. Do no harm.

Brainy: Nia! You are welcome. I assume you received the pizza delivery?
Nia: Thank you for the pizzas but my dress is bursting at the seams, and I'm pretty sure I have heartburn.
Brainy: (romantically) Hmm, yes. My heart also burns.

Kelly is deathly allergic to blueberries - a fact she discovered when she nearly died after eating some when she was 4.

Kelly always carries an epi-pen with her, in case of an allergy attack.

Kelly doesn't liked poached eggs. Bacon and whipped cream, however, are two of her favorites.

Nia's favorite breakfast is burritos with chorizo and crema. Her preferred brand of coffee is "Nitro," which she takes with an extra shot of cold brew.

Kara thinks Andrea Rojas bough CatCo was a means of getting an advertising platform for Obsidian North.

In the day since he quit CatCo, James has been approached by a group that wants to back him in a run for the open race for a new state Senator.

James was also offered the position of the media director of the Smithsonian Museum.

According to J'onn, there were two brothers, Phobos and Deimos, in the early days of Mars. Their rivalry and bloodshed was the reason for the split of the Green and White Martians. To prevent this ever happening again, a curse was placed on the Green Martians, which psychically inflicted pain on brothers who fought each other. This is known as Fa'ra'too'rik.

J'onn says there is no cure for Fa'ra'too'rik on Earth.

Brainy says that, in the future, psychic traumas are treated with Q-Waves.

Kelly uses Q-Waves in treating her patients at Obsidian North.

Males is revealed to have a White Martian ally on Earth.

Lena's new project, Project Non Nocere, will rid humanity of their instincts to hurt one another. Lena intends to accomplish this through studying Obsidian North's contact lenses and using them to find a way to reprogram people organically.

It is revealed that Lena abducted Eve Teschmacher in 501.

Andrea Rojas starts requiring all of CatCo's writing to be submitted through a portal that can only be accessed by certain special tablets .

William Dey's wife is a lawyer.

Andrea assigns Kara to write a piece on the fashions worn at her Pulitzer Prize award ceremony and demands it be done by lunch, after Kara pitches a piece on the state Senate race.

Eve says that she was recruited by Leviathan at age 16, because she was deeply in debt after her parents died and she had no other way to finish paying for college.  She does not, however, name the organization as she says they would kill her and Lena if they even thought Eve had exposed them.

Brainy overdoes it trying to deliver Nia's favorite lunch, leaving her with enough Bento boxes to build a fort around her desk.

Kelly works with her patients to create a sort of mind palace where they feel safe. For J'onn, the palace takes the form of his office. His altered memories take the form of books with blank covers and no names on the spines.

The Battle of L'Zoril M'nt and Battle of C'arel were two major battles of the Martian Civil War.

One of the blank books in J'onn's mindscape opens a secret passageway revealing a Martian door Opening it leads J'onn into a void where his memory should be.

According to J'onn, only another Martian would be capable of erasing his memory but altering the mind of another is the greatest sin in Martian culture.

William Dey looks suspicious when Kara leaves in the middle of the day. As she does this, he was looking at photos of Andrea Rojas with someone named Dr. Niles Jarrod.

William Dey calls in a favor with the NSA to have Kara's phone tracked.

J'onn guesses his parents might have made him forget Malefic existed

J'onn recalls that Malefic created a poison called H'ronmeer's Curse, which weakened the Green Martain forces, killing many and basically winning the Martian Civil War for the White Martians.

Before they fell, the Green Martian High Council sentenced Malefic to be banished to the Phantom Zone for his crime.

William Dey finishes Kara's article for her and turns it in. This results in Kara being assigned to edit copy rather than writing, since the copy editor department is overworked.

Andrea Rojas is able to get into Lena's secret lab.

Lena's assistant is the girlfriend of Andrea Rojas' best friend.

Andrea had trackers installed in the contacts she gave Lena and determined she was taking them apart trying to figure out how they worked. She takes the borken pair, says Lena will never own another one and that it she tries a stunt like that again then Lena will be the big story rather than owing her one.

Eve points out she could have called for help when Andrea was in the lab but didn't and says that proves she can be trusted.

Brainy sends Nia far too many of her favorite pizza for dinner.

Nia tells Brainy to lay off the food and find other ways to express his love.

Alex sees through Malefic's disguise immediately when he masquerades as Kelly.

Kelly is allergic to blueberries, hazelnuts, bees, and cats.

Brainy sneaks into Nia's apartment and reads her poetry as she is falling asleep.

William Dey is revealed to volunteer at a homeless shelter, after Kara tells him off for trying to sabotage her at work.

Malefic says that he has no power to incept (i.e. enter another person's mind telepathically)

A decent enough episode, though the focus is on J'onn rather than Kara and almost everything in the Lena subplot is far more interesting than Kelly and Alex's romance and Nia and Brainy's comic relief. Still, it does a lot to develop Malefic and it mostly harmless and inoffensive.