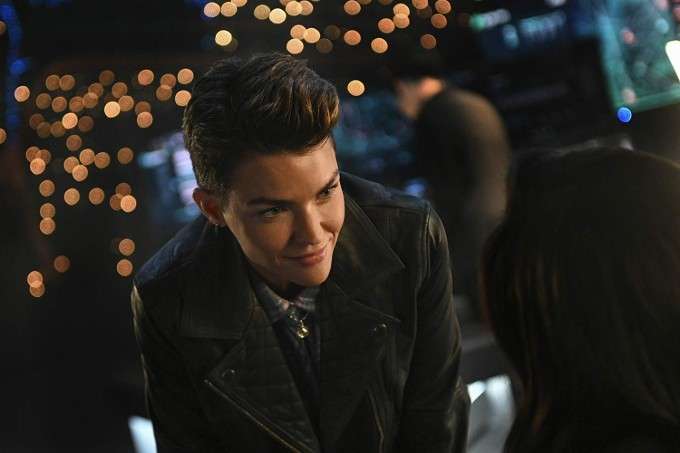 With Jacob Kane and The Crows more determined than ever to bring down Alice and the Wonderland Gang, Kate faces a frightening possibility - what if Alice is her long-list sister, Beth? As Kate explores this possibility and continues to make use of Bruce's old tech, she must discover who she can trust, particularly when Mary has her own secrets and Sophie seems to have figured out Kate is Gotham's new vigilante.

The parking garage through which Kate accesses the secret garage entrance to the Bat Cave looks very similar to the underground bunker where Lucius Fox worked in The Dark Knight trilogy of movies.

When Sophie asks Kate if she is Batwoman, Kate says that if she were going to dress up and dramatically save people she'd do it as Wonder Woman. This is the first indication that Wonder Woman exists in the Arrowverse, even as a fictional character. (It should be mentioned, however, that the Amazons and Themyscira were confirmed to exist on Earth 1 in L306.)

Reference is made to Robinson Park - the Gotham City equivalent of Central Park in the comics. It is named in honor of legendary Batman artist Jerry Robinson.

Kate uses "Waffles" as a code-word to prove that Alice is Beth, as the two sisters always went to the same park after-school on Fridays and got chocolate waffles at a nearby snack stand. This character note is taken directly from the Batwoman comics, where the two sisters got chocolate and waffles (their favorite food) on their birthday before being abducted by terrorists.

At one point one of The Crows make reference to the Kubert District of Gotham City. This is likely a nod to Andy Kubert - a notable artist, famous for his work on Batman and Son and the Neil Gaiman story Whatever Happened To The Caped Crusader? It could also be a nod to Joe Kubert, Andy's father, who is more famous for his work on various war comics, but did draw a number of milestone covers for various Batman titles before founding The Kubert School for comic book artists.

The explosion which allows Alice to escape occurs on Loeb Bridge. This is a nod to writer Jeph Loeb, who wrote The Long Halloween and Hush.

It is said that the fragments which were determined to be part of Beth's skull were found at Miller Farm. This is a nod to writer Frank Miller, who wrote The Dark Knight Returns and Batman: Year One.

Vesper Fairchild makes a joking reference to Robin's high school graduation as to why Batman might not have shown up to investigate the bombing of the Loeb Bridge. This is the first time Robin has been confirmed to exist in the Arrowverse.

Wayne Enterprises owns a thermal cycler and Polymerase Chain Reaction mixers, which are used to separate and amplify DNA. These could be used to compare two DNA strands to see if they match.

Batman's gear includes a laser saw that can cut through anything and a rebreather that lets a person breathe underwater without a SCUBA tank.

The Bat-Suit has a built in defibrillator, but no auto-dry function despite costing $10.8 million to make.

Alice: Tell me you found my favorite knife.
Dodgson: No luck.
Alice: What the hell did I do with it? It is so much more fun unveiling my evil plan when I can flip it about for cadence.

(Luke is trying to scare Kate out of using the gear in the Bat Cave)
Luke: See, these aren't toys. These are one-of-a-kind, dangerous tools which even I don't know how to use. I don't how to use half the stuff in here because it's not meant for me. It's meant for Batman.
Kate: You know who you sound like?
Luke: I'm sure you'll tell me.
Kate: Lucius Fox.
Luke: Trust me. I am a far cry from my father.
Kate: (dryly) Oh, I know. He was actually useful.

(Alice sits on a swing, regarding Kate.)
Alice: Well, look who finally figured it out.
Kate: Are you my sister?
Alice:  Mmm. Who in the world am I? Now that is the great puzzle, isn't it?
Kate: Did you know I was gonna have your knife tested for DNA?
Alice:  You had my knife? (laughs) And here I've been going around using this charmless contraption. (idly plays with a butterfly knife)
Kate: You didn't have your guys jump me?
Alice: Jump you? Kate, we're sisters.
Kate: Prove it. Let me test your DNA before the Crows kill you.
Alice: I already proved it. I'm here. I knew the password, "Waffles." Our favorite spot. We used to come here after school on Fridays and gorge our faces in chocolate-covered garbage. How else would I know that? (pauses) Unless... oh, dear. Did the press mention that you and Beth used to come here as part of your silly, little tradition, and did I read an old article online?

Alice (V/O): It may have taken you years, sweet, darling Kate, but you found me eventually Even if I'm not the girl you expected me to be. I had my secrets just as you have yours, but do be careful, my dear sister. Putting on that suit and all the darkness that comes with it makes you just as crazy as me.

This episode opens four days after the events of 101.

According to Kate, practically everyone in Gotham was searching for Beth the day after she disappeared. Eventually it was just her and her father... then just her.

Kate tells Jacob about her theory that Alice is Beth. She also shows him the knife with the garnet stone in it that matches the one from her necklace.

Jacob insists Beth is dead because fragments of her skull were found at Miller Farm.

Alice breaks into the house she grew up in and kills the elderly couple that lives there now. The address of the house is 1472 Norman Drive.

Kate approaches Sophie for help in scanning the knife she took from Alice for a DNA sample.

Kate and Sophie are attacked by men in Wonderland Gang masks, who take Alice's knife back.

Kate asks how they knew she had the knife in the first place, but this question is largely ignored.

Kate determines that one of Mary's patients works for Alice and that she fought him as Batwoman the night before. She uses him to deliver a one-word message to Alice - "Waffles."

Kate tells Sophie about her plan to lure Alice out and prove that she is Beth, asking her to stall The Crows for a few hours. Instead, Sophie betrays her trust and tells Jacob Kane about what Kate is doing.

Kate blamed herself for Beth's disappearance, because she got out of the car while Beth climbed into the front seat to check on their mother before their car fell off the bridge.

Alice tries to make Kate uncertain whether or not she really is Beth, saying that she might have read an article which spoke about Kate and Beth's Friday habits.

Alice cuts herself to give Kate a DNA sample, just before The Crows show up.

Alice seems to feel honestly betrayed that The Crows showed up to what Kate said would be a secret meeting.

Dodgson attempts to kill Mary in her secret clinic. Kate shows up to save her as Batwoman.

Someone bombs the transport taking Alice to Arkham Asylum.

Kate frees Alice from the transport she was trapped in, but is knocked out after The Crows throw something explosive in between her and Alice.

Kate is revived before The Crows find her thanks to Luke triggering the defibrillator in her suit.

Mary doesn't tell Jacob about Dodgson attacking her or that Kate told her about her plan to track down Alice and prove she was Beth. This shows that, ironically, Mary was more worthy of trust than Sophie, whom Kate thought she could trust.

Jacob Kane threatens to have Kate arrested for aiding and abetting if she doesn't drop the idea that Alice is Beth.

It is revealed that the information that Beth's skull fragments were found at Miller Farm came from investigators employed by Catherine Hamilton.

Catherine Hamilton is revealed to be behind the attack on Sophie and Kate. Presumably she was also responsible for the bomb that nearly killed Alice.

Another solid episode which thickens the plot and adds further depth to the core cast. The heel-turn with Catherine Hamilton is perhaps not as surprising as it might have been once (Every CW Arrowverse show has had a mentor be revealed to be someone they weren't at this point.) but the acting is believable and the story well paced.
Posted by Starman at 3:53 PM