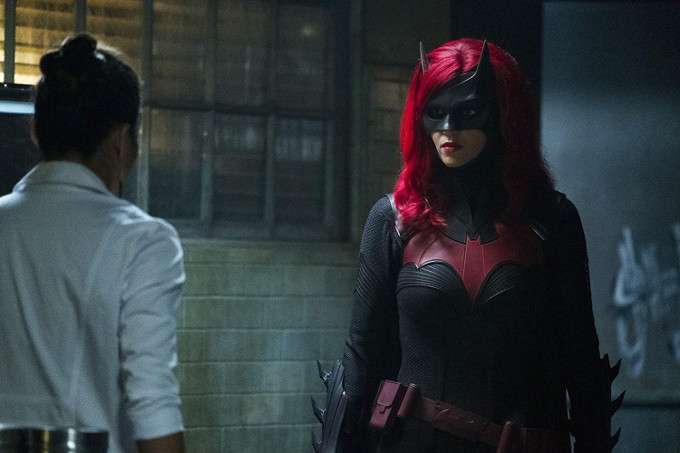 When a mysterious new vigilante begins targeting various lawmen in Gotham City, the public all upon Batwoman to get to the bottom of things. As Luke makes a surprising confession to Kate, Alice continues her vendetta against the Kane family, setting her sights on Catherine Hamilton.

There have been several DC Comics villains who have used the name of The Executioner. The first was a Batman villain - a man named Willy Hooker who executed wanted criminals to claim the bounties on their heads. It was eventually revealed that he was helping the criminals to escape from prison in order to set them up.

The Arrowverse version of the Executioner is a man named Bertrand Eldon, who served as the executioner at Blackgate Penitentiary for many years. He becomes a vigilante targeting crooked public officials after finding out that a corrupt judge, district attorney and police officer worked to send many innocent people to Death Row, indirectly putting innocent blood on his hands.

A news broadcast in this episode gives the name Jack Napier to The Joker. This is the name of the gangster, played by Jack Nicholson, who became The Joker in the Tim Burton Batman movie.

The current Police Commissioner of Gotham City is revealed to be a man named Forbes.  This may be a nod to Jack Forbes - a corrupt Internal Affairs officer in the Batman comics, who worked with Carmine Falcone and Mayor Hady in the comics to force Jim Gordon out of power and go after Batman.

At one point The Executioner barricades himself in a building on the 200 block of Rucka Avenue. This is a nod to Greg Rucka - one of Kate Kane's co-creators and the writer who wrote most of her early appearances.

Rucka Street is said to be in West Harlow. This is one of the districts in downtown Gotham City in the comics.

A reference is made to a former Mayor Cobblepot. This is almost certainly a nod to Oswald Cobblepot, a.k.a. The Penguin, who tried to run for mayor of Gotham City in several Batman stoires in various media, including the movie Batman Returns.

Chris the Fist is arrested on Sprang Avenue. The name is a tribute to Dick Sprang - a classic Batman artist, who created the character of the original Executioner.

Dean Deveraux was the scientist at Hamilton Dynamics who was able to make the coil accelerator of the rail gun that could penetrate the Batsuit work. The most difficult part was finding a way to overcome the ferromagnetic projectile saturation.

The Bat-suit's carbon fiber ribbing is designed to absorb any impact, so any deformation in the fibers is recorded in the suit's data. Originally this was so the suit could track damage caused by bullets and blunt-force trauma to find better ways to repel such damage in the future. Luke uses the same technology to record a partial imprint of the license plate of The Executioner's car.

Hydrogen cyanide is a flammable gas. It burns at 6% saturation. This means that one can escape a room full of hydrogen cyanide gas by setting burning the hydrogen and the flames will then burn up the cyanide before it can be inhaled.

Kate: Any suspects?
Luke: Well, if you exclude the law-abiding citizens of Gotham, that leaves the other half.

Bertrand Elrond: (video) So if you found this, then you found me, and, um... And I did it. I am guilty as sin, but I'm not the only one. For 20 years, I threw the switch on the worst people Gotham ever spat out. I was glad to do it, too. Doing the public a service, and it never bothered me when they said they were innocent.
Batwoman: Great. Sadistic and long-winded.
Bertrand Elrond: (video) I mean, what else were they gonna say, right? See, then all their stories, they started to sound the same. The same names kept coming up. Same evidence. And everybody who sat in my chair started to look the same; black, brown, poor. In 20 years, I never juiced a rich white guy. So I started digging in their files. You know what I found? The same three corrupt law enforcement officials, pulling the strings in every case. Coerced confessions and murder weapons suddenly showing up out of nowhere. I mean, obviously planted...
Batwoman: Didn't Chris The Fist say that his confession was coerced and the murder weapon just suddenly turned up in his car?
Bertrand Elrond: (video) The people that I executed were innocent, which meant that that I was the guilty one, that that cabal, they turned me into a murderer, which they made me punish the innocent.
Batwoman: (thoughtful) So who's the third member of this cabal?
Luke: Wait. You're not actually buying this? OK. Believe me. I know racial profiling is a thing in Gotham, but this guy is obviously crazy, almost killed Sophie, nearly made you roadkill.
Batwoman: Doesn't make him wrong.
Luke: He's an admitted killer, Kate. I knew Stanton, OK? He spent hours with my family day after day, and he never, ever stopped working until he found justice. If Stanton is accused of being dirty, my dad's killer could use that go get a new trial.
Batwoman: But if Chris The Fist or anyone else can do go down for something that they didn't do, how is that justice?

Sophie: Believe it or not, I'm trying to protect her.
Mary: By having my dad shut down her entire operation?
Sophie: She's gonna get herself killed.
Mary: Batwoman can take care of herself just like she took care of you twice by my count, and now you're just gonna betray her? Uh I mean, what? Is that, like, your thing?
Sophie: What's that supposed to mean?
Mary: I mean, that's what you did to Kate, and then she had to put an entire ocean between you and her, and now you walk around, pretend like she meant nothing to you.
Sophie: You don't even know what happened.
Mary: No, but I saw what it did to her. (sighs)  Look. You're right. It's not my drama, so do what you want. In the meantime, Ibuprofen every 4-6 hours and change the bandage once a day. Don't tell my dad about this clinic And maybe think about whether or not you want to add Batwoman to the list of people you hurt.

The man who abducted Beth Kane is identified as Dr. August Cartwright. He is confirmed to have been a medical doctor.

The first victim of The Executioner is Angus Stanton - a district attorney in Gotham City, with a reputation for being tough on crime. He is famous for convicting various costumed criminals, including The Joker. He was electrocuted while trying to climb a chain-link fence.

Sophie requests another specific assignment from Jacob Kane: trying to hunt down Batwoman.

Alice creates a flesh-mask that allows Mouse to pose as Dean Deveraux - an employee at Hamilton Dynamix.

The Police Commissioner is a man named Forbes.

Lucius Fox died on the night Luke Fox's high-school graduation party. He was caught in the crossfire of an armed robbery, after going to a convenience store to get ice.

Luke was accepted to MIT, but never wound up attending due to the stress of his father's death.

Angus Stanton was the prosecutor who put away Lucius Fox's apparent killer.

Luke suggests The Executioner might be Chris Medlock, otherwise known as Chris The Fist; an ex-boxer,  and ex-con, who was sentenced to 30 years in prison for second-degree after shooting a bartender. He confessed to the crime but later claimed it was coerced, but the murder weapon was found in his car.

Chris Medlock demands to speak to a Detective Donnelly at the hostage situation on Rucka Street.

Sophie identifies Batwoman as Kate Kane, just before being shot.

Batwoman takes Sophie to Mary's secret clinic to get her patched up.

Kate determines that the common link between the Executioner's murders is that he uses methods of execution prescribed by Gotham City law - electrocution, firing squad and gas chamber. This leads her and Luke to theorize that the next murder will involve a gas attack.

The Crows arrest Chris The Fist on Sprang Avenue. This means that he cannot be The Executioner, as he robbed the one warehouse in town holding Hydrogen cyanide pellets after Chris The Fist's arrest.

Using the imprint of a license plate embedded into the Bat-suit, Luke determines The Executioner must be Bertrand Eldon, who worked at Blackgate Penitentiary for 20 years as their executioner.

Sophie learns about the existence of Mary's secret clinic, but agrees to keep quiet about it.

Kate finds the canister for the stolen hydrogen cyanide pellets on the coffee table in Betrand Eldon's house. It turns out to be empty, except for a flash drive, where Kate finds Eldon's confession and explanation for why be became the Executioner - to see justice done to a corrupt cop, lawyer and judge who framed innocent minorities to look tough on crime.

Batwoman gives the flash drive to The Crows.

Judge Calverick is identified as the third member of the cabal, but Jacob Kane doesn't believe it.

Jacob Kane blames Batman for making Gotham as crazy as it was and for failing to save his wife and Beth.

Luke is left wondering if the man arrested for his father's murder might be innocent.

Mouse is revealed to have stolen the rail gun from Hamilton Dyanmics. He gives it to Alice.

A solid episode with an interesting one-shot villain that gives some unexpected depth to Luke and puts an odd twist on one of the classic Batman supporting cast members.
Posted by Starman at 11:33 AM