The Flash Episode Guide: Season 7, Episode 6 - The One with the Nineties 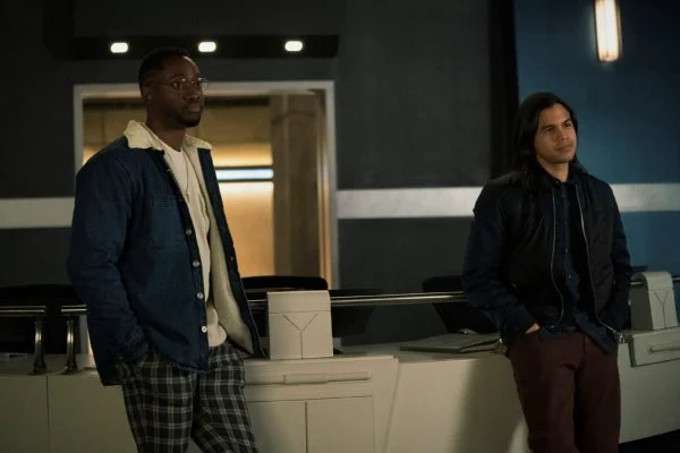 As Iris forms a connection with the Speed Force, Cisco and Chester travel back in time to 1998, where they experience the same day over and over after discovering a third new Force.

Jurassic Park (the opening scene parodies the first appearance of the T-Rex), Groundhog Day (idea of same day looping), Back to the Future (general time travel theme, Chester's interacting with his father when he was younger) , Friends (the episode title mimics the format used by Friends' episode titles) and The Matrix (idea of people trapped in a fake reality)

Brandon McKnight and Carlos Valdes have amazing chemistry together as "Team Chesco" and pairing the two of them for an episode was a brilliant idea. It's hard to believe we're just now getting a chance to see the two biggest engineering geeks on Team Flash interact extensively together over a year after Chester's introduction.

This is the first episode to truly push Chester beyond being another goofy nerdy character and Brandon McKnight delivers a truly heart-breaking performance as Chester interacts with the father he thought had abandoned him.

This episode introduce the Still Force to the Arrowverse. In the comics, the Still Force is an energy field first theorized by The Turtle, which was to inertia was the Speed Force was to momentum. He was eventually able to find a way to tap into it after deaging himself to infancy, whereupon he became tapped as a weapon by Gorilla Grodd as part of Lex Luthor's Legion of Doom.

The Still Force of the Arrowverse is tied to temporal energy and is said to resemble the powers of Turtle 2.0, according to Cisco Ramon.

Chester designs an amplifier device that can boost isotopic signals making them easier for the STAR Labs satellites to detect. They are also capable of detecting foundational isotopic signatures. (This means they will be able to identify individual force users rather than just their presence or absence.)

A reference is made to neutrino filtrations glitching.

The amplifier showed an isotopic surge when the green energy wave hit Cisco and Chester and picked up a temporal energy wave unlike anything that coincided with the appearances of Psyche or Fuerza. This leads them to conclude there is a third Force that is tied to the time stream.

Adding a transmitter diode to the censor can localize the isotopic circuits enough to detect the new Forces within a 20 yard radius, but requires the kind of receiver that can't be bought commercially in 1998.Chester is able to jury-rig the necessary technology using parts from an UltraFax 4000.

The censor was able to absorb the temporal energy and shield Chester from its effects.

Creating a device that can disrupt the temporal isotopes requires an X-76 power converter.

(Chester and Cisco are walking into Masonville. Suddenly they slow their pace.)
Cisco: Tell me you’re seeing what I’m seeing.
Chester: Does it have anything to do with “Space Jam” being back in stock?
Cisco: At that Blockbuster Video that doesn’t exist anymore!

Cisco: Look, is this freaking awesome? Yes. Do we desperately need to figure out a way to get back home? Also yes.
Chester: Well, how are we supposed to do that without a DeLorean or a hot tub?

The opening scene shows Natalie; the barista at CC JItters whom Chester had a crush on.

Natalie sees a man in Roman armor, a submarine and a Tyrannosaurus Rex manifest in the street outside CC Jitters after getting off work.

The Speed Force, still in the form of Nora Allen, is using all her strength to heal Barry while he's in a coma. However, she is still weak after being attacked by Psych and Fuerza.

The Speed Force claims to remember light and love after being reborn, before being attacked by Psych and Fuerza. She believes they were trying to feed on her energy.

Cisco and Chester begin driving around Central City and the suburbs, setting up scanners to detect the other Forces before they come after the Speed Force again.

Frost and Caitlin are still adjusting to living together.

Frost has taken up painting and wanted to make something to hang on one blank wall in the apartment. Caitlin had already bought a painting to hang there, which Frost vandalizes.

Chester grew up in the town of Masonville but he and his grandmother moved to Central City once he was done with high school.

A green energy wave envelopes Chester and Cisco as they're working on a censor outside Masonville. It causes their phones and van to disappear.

A forcefield (which Cisco compares to the dome from Under The Dome) prevents Cisco and Chester from leaving Masonville.

Iris tells the Speed Force that when Barry is stressed, he wraps himself up in a blanket. She refers to this as a BBB - Barry's Blanket Burrito.

The first sign that Cisco and Chester traveled in time is that they discover that a Blockbuster Video store is still open in Masonville as they walk into town. The marquee for the store is promoting "The Best Movies of 1998" and guaranteeing that the movie Space Jam will be in stock.

The Blockbuster Video store also has posters promoting several 1998 movies, including Practical Magic, Fallen, Why Do Fools Fall In Love? and Sphere.

Chester makes reference to Back to the Future and Hot Tub Time Machine in speculating on how the can return to their proper time.

Cisco and Chester are able to rework their censor to track the Force to Masonville High School.

Chester and Cisco steal clothes from the school's Lost and Found to fit in and pose as students while they try to detect the Force-user.

Cisco and Chester interview a student named Parker, who remembers the movie The Matrix, despite it not having come out yet when Cisco makes a reference to it. This triggers a reset of the day because something figured out that Parker had broken free of its control.

The reset sends Cisco and Chester back to the town square of Masonville. This time, however, Cisco thinks he is seven years old and has no memory of Chester.

Chester makes reference to Cisco visiting Atlantis (618) and the battle between King Shark and Gorilla Grodd (515).

Chester is able to restore Cisco's memories by reminding him of Game of Thrones.

Cisco makes reference to the horror movie Get Out in describing Parker's reaction.

Chester and Cisco find that the day that is looping is December 4, 1998.

Iris tells the Speed Force that the blanket Barry swaddles himself in when he is depressed is one that his mother made for him when he was young.

The Speed Force realizes that taking the form of Barry's mother must be upsetting him more than it comforts him.

Cisco and Chester attempt to buy an X-76 power converter, but the last one at the local electronics store was bought by Chester's father.

Chester says his father was a genius who was always working on inventions as part of his get-rich-quick schemes when he wasn't working. As such, he never had time for Chester as a kid.

Coincidentally, December 4, 1998, is the day before Chester's father died in a car crash while on a business trip.

Chester goes to talk to his father, giving the alias John Boyega.

Chester discovers that his father bought the X-76 power converter for him, but that rather than giving it to him he was going to leave it among a bunch of junk Chester was sure to dig through while he was out of town.

Chester's dad defends his actions when Chester questions him, saying he is trying to teach his son to be resourceful and a problem solver as well as the joy of seeing treasure where others see trash.

Chester's dad helps him to build a make-shift X-76 power converter using odds and ends in his workshop.

The temporal Force manipulator is revealed to be Deon Owens, who was (in 1998) the star quarterback of Masonville's high school football team. Unfortunately, an injury during the state championships that year cost him his chance to play college football and go on to play professionally. Deon would grow up to become a used car salesman with four pins in one knee.

Empowered by the temporal Force, Deon has pulled the town of Masonville back 23 years into the past and is forcing everyone to relive the best day of his life - the last day he was still treated like a star - over and over.

Outside of Masonville, Deon's manipulation of the temporal energies is causing random time fluctuations. These include the anachronisms witnessed by Natalie and the clothing of Team Flash's members to change randomly.

Joe West winds up in a 1940's zoot suit with a fedora.  Frost is left wearing some 1960's Hippie wear.  Caitlin winds up with teased hair and a 1980's power suit.  Iris suddenly has her hair reshaped into an Afro and winds up in a mini-dress that leaves her looking like a Pam Grier character.

Frost's tablet is turned into an abacus.

Chester is able to get Deon to stop the time loop by telling him that he needs to let go of his past and focus on trying to change his future for the better. Unfortunately, this seems to inspire Deon to start trying to alter the future for everyone.

Barry comments that Deon seems more reasonable than Psych and less lethal than Fuerza, but that his powers could make him the most dangerous of the Forces.

Cisco officially dubs the power Deon manipulates the Still Force. He also gives Psych's power the name of The Sage Force and Fuerza' power is dubbed The Strength Force.

Iris invites the Speed Force to stay with her and Barry in their guest room.

Frost decides to make the Hippie look a new part of her aesthetic.

Joe warns Frost about Kristen Kramer and suggests that she lay low for a while.  Frost says that is not going to happen.

A solid character-building episode that does more to develop Chester than any episode since his premiere and sets up an interesting new enemy in the Still Force host Deon Owens.