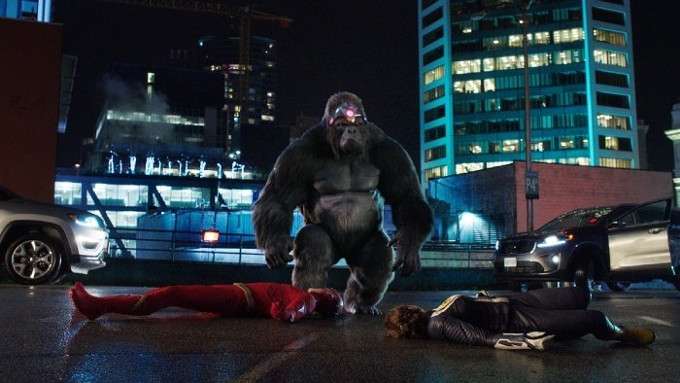 Cisco has completed work on the metahuman cure, but they still need a willing test subject to make sure it works. Barry suggests that King Shark - currently in the custody of ARGUS - might be just the man-shark for the job. Unfortunately, their visit coincides with Gorilla Grodd's attempt to escape custody and take over Central City with his newly honed psychic powers.

Traditional monster fighting monsters movies, The Shape of Water (subplot of woman falling in love with a fish monster) and The Flash comics of John Broome.

Where the heck is Ralph Dibny this week? I know they probably couldn't afford two animal monsters AND the stretch guy this week, but it would have been nice if something had been said about where Ralph was.

Again, it must be noted how odd it is that Cisco - an engineer - is working on a cure for metahuman powers, while Caitlin - a medical doctor - constructs the delivery system.

It also seems strange that neither Caitlin nor Cisco had previously raised their objections to forcing their cure on metahumans who don't want to lose their powers... such as when Barry first suggested using their cure against Cicada weeks ago!

Even by the standards of comic book junk science, the idea that there is no way they'll ever be able to cure King Shark if he reverts back to his shark state is pure plot convenience. Or inconvenience in this case.

I didn't realize how much I missed Jesse L. Martin as Joe until they brought him back. While his subplot here is strictly unnecessary and is only there to make us realize how much we missed him... still good to have him back. Hopefully he'll be back in action soon.

The cast in general do a good job acting to empty air and suggesting that they believe all the various CGI beasties really are there.

While the CGI is hardly the show's best, it is probably the best we could have hoped for given the difficulties of two CGI creatures fighting. And the effects team does a good job trying to make it look like the creatures have weight in the actual environment, even if Grodd seems way too bouncy for an 800 pound gorilla.

Grodd is said to have climbed up the Broome Belfry. Located at the center of Central City, this building is doubtlessly named in honor of John Broome - a legendary Silver Age comics writer, who was probably most famous for his work on The Flash.

The metahuman cure works by altering a person's biology on a cellular level and suppressing the dark matter inside a metahuman's body.

Dr. Tanya Lamden was able to reverse King Shark's regression using a cerebral interface that stimulates his neural outputs, which she calls a telepathic crown.

Cisco compares the telepathic crown to the Mental Activity Dampener 2.0, even before they try using the two technologies together to increase their power and act as a lure for King Shark. The two are made to interact using a logarithmic code.

After having the metahuman cure used on him, King Shark's body still has some dark matter in his pituitary gland - the result of the first cure not being made with animal physiology in mind. A second dose, modified based on his unique biology should make his transformation to an ordinary human permanent.

A shark's amygdala triggers a huge emotional response when it feels attacked. Caitlin theorizes this is why Shay Lamden remembers very little of his early days as King Shark apart from rage.

Caitlin determines that King Shark's earlier rampage was caused by a severe brain wave disruption in his frontal lobe, resulting in a complete lack of control over emotions and judgment.The way the neurotransmitters work in the telepathic crown work never would have caused that. This leads to the revelation that Grodd was trying (and failing) to telepathically control King Shark.

Sharks only see in monochrome.

With the telepathic crown, Grodd's telepathy is powerful enough to override the anti-mind-control headsets that Cisco developed.

A vibration or jolt could be used to accelerate the cell cycle in Shay Lamden, prompting a return to the dark matter cellular form. Unfortunately,  saturating his metagene cells a second time will eliminate any possibility of the meta cure being able to ever restore him to normal.

When a shark is turned upside down, it enters tonic immobility - a state of paralysis.

Sharks have electroreceptor organs called ampullae of Lorenzini? It's how they detect electromagnetic fields and navigate. The organ can also attract electrical currents, which enables The Flash to wake up King Shark with a thrown lightning bolt.

Sherloque: Monsieur Lamden, I should introduce myself. Sherloque Wells. You've probably heard of me. I have a question. I've been debating in my brain. What drives the King Shark? Is it the shark, or is it the man?
Shay Lamden: If you're asking should I be held accountable for my actions, my answer is simple. Yes, I should. I don't remember how many people I hurt, or who, but that's no excuse.

Sherloque: I see him out there and I see you in here in the shadows. Why is that, I wonder?
Tanya: Can you blame me? You saw his hand transform.
Sherloque: (chuckles) Yes, right. "Shark Week!" Not something you see every day, but no, I thought your hesitation occurred before that moment, not after. It was a slight hesitation, but it was there nonetheless. Again, why do you think that is?
Tanya: I don't know.
Sherloque: No? Well, perhaps I could be so bold as to offer a suggestion that it is not the hand of which you were frightened, but rather, it was seeing the face of the man that you love.
Tanya: I don't love Shay. We're friends.
Sherloque: All right, well, let's take a look at that too, shall we? So this is a friend from another Earth, for whom you left a high-paying job and for whom you have dedicated every waking moment of your life trying to help. It doesn't quite add up.
Tanya: I can't love Shay. He's my dead husband's doppelganger from Earth-2. How crazy would I have to be to fall in love with him?
Sherloque: No crazier than marrying the same woman from five different Earths. (laughs quietly) I know. I'm very good at marrying people, but not so great at staying married. Along the way, though, on these countless Earths and countless doppelgangers, I learned there is one thing that makes all of us unique. And if that is what you fell in love with, well then, perhaps a face doesn't matter that much.

Grodd: Hear your master, Humans. Soon, you will only know my will...The will of Grodd!

King Shark: Tanya, you look sad. Why?
Tanya: We found each other today, and now that connection is -
King Shark: Still here.
Tanya: Shay... What you did...
King Shark: I would do it again for you, my love.
(King Shark puts his hand against the glass of the tank. Tanya does the same.)

King Shark and Dr. Tanya Lamden were last seen in 215.

ARGUS Director Lyla Michaels makes an appearance. She is informed of Nora's status as Barry's daughter from the future and comments that this is no stranger than finding out your son used to be your daughter - a reference to how Barry's time-traveling somehow caused Sara Diggle to become John Diggle Jr.

Joe suggests that someone besides Officer Jones might be helping Cicada out.

ARGUS hired Dr. Tanya Lamden to work with King Shark to try and find a way to improve his condition.

King Shark is agreeable to trying the cure, before he suddenly goes on a rampage.

Joe is allergic to Szechuan peppers.

Iris seems to have developed a fear of her new office, after hearing about all the times she died there after the events of 514.

Barry injects King Shark with the metacure after he grapples Cisco. The cure works, transforming him back into an ordinary human.

Shay Lamden says he only remembers fragments of his time as King Shark before Tanya began working with him.

It is revealed that Grodd escaped his cell at ARGUS by planting a psychic suggestion in his guard's mind when the power was knocked out and the power dampeners in his cell turned off during The Enlightenment. The suggestion was to keep the power dampeners powered down while Grodd bid his time and gathered the information he needed for a new plan to take over Central City.

This led to Grodd's discovery of King Shark's telepathic crown and the realization he could use that to augment his telepathy to rule a whole city.

Joe reveals to Iris that the reason he stayed in Tibet for so long was so that he could heal himself after his confrontation with Cicada in 503.

Joe tried to help Iris work through her fears by having her punch them out on a punching bag.

The Flash Museum wrongly says that speedsters are immune to Gorilla Grodd's telepathy.

Grodd is placed in a medically induced coma to prevent him from telepathically controlling his guards ever again.

Ever since being exposed to the telepathic crown, Grodd's telepathic powers are now growing without any outside stimuli. A coma was the only thing Caitlin could think of that would keep him alive without endangering his life.

Barry thinks the team should approach Cicada and offer to let him take the metahuman cure.

It is never explained just how Grodd was returned to ARGUS custody after having become unstuck in time during Legends of Tomorrow Season 3. Presumably the Time Bureau returned him to his cell after Grodd's attack on Amaya Jiwe's village in 1992.

The chief fight of the episode could have been avoided had Barry not very slowly worked his way to the downed Grodd and removed his crown at super-speed.

The episode takes its time in delivering its promised fight, but once we get it... it's there. It's not that the fight is dissatisfying, but it takes forever for Grodd to be revealed and there's something awfully strange about an episode where the main characters are acting like cardboard cut-outs while the most satisfying emotional subplot involves two characters we haven't seen in three years. The bits with Joe and Iris are okay, but feel completely disconnected from everything else.

For a filler episode based around a ludicrous comic-book idea though, this episode is oddly satisfying. But it would have been better had the premise been given two episodes for Grodd's plan to be better fleshed out, like the last time he attacked Central City and for us to have had more time to develop the conflict between Barry's desire to use the cure to save lives and Cisco and Caitlin not wanting to turn it into a weapon against every metahuman some other authority decides shouldn't have powers. There was a time and a place for this argument and it was several episodes ago when Barry first suggested using the cure against Cicada. Again, more time (and a second episode) might have helped with this. All in all, though... not a bad bit of filler.
Posted by Starman at 4:33 PM