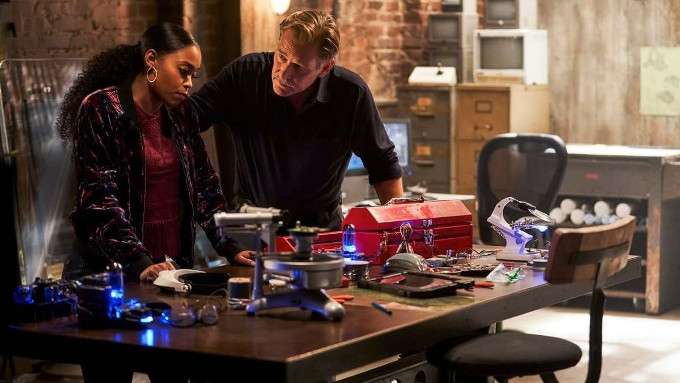 As Anissa continues the search for Grace and Gambi works with Jennifer to make her a super-suit, Lynn runs into another roadblock when it comes to treating the Green Light Babies. Meanwhile, Jefferson is confronted by a resurrected Lala and a mysterious death from their past.

Black Lightning #1 (character of Earl is taken from this story)

William Catlett and Cress Williams have great chemistry together in their scenes as Lala and Jefferson.

The scenes where Lala sees the ghosts of the people haunting him are well-edited and intercut with the scenes where he's shouting at nobody, from Jefferson's perspective. The effect is dizzying and disorienting, which adds to the power of these moments and helps to subtlely convey Lala's mental state.

In the first Black Lightning comic, Earl Clifford was a star athlete at Garfield High, who helped Jefferson Pierce with running a group of drug dealers off the campus. He was later killed and hung through the basketball hoop in the school gym by The 100 as an example. Earl's murder inspired Jefferson to create his Black Lightning persona to fight crime.

In this episode, Earl Clifford was Lala's best friend growing up, but he was trying to go straight and get out of the drug-trade a lot of the poor kids were forced into by The 100. He was persuaded to go to the police by Jefferson Pierce and killed by Lala, who decided to take care of it so he could make sure his friend didn't suffer. He also stuffed Earl's body through a basketball hoop to send a message to the public.

Gambi says he may be able to identify what was stolen from the secret room in the free clinic by isolating the radioactive residue and then track it.

Jefferson: Why are you here?
Lala: That's a good question. I came to see you. "Those who can't remember their past are condemned to repeat it. "
Jefferson: You know, most people think that's Winston Churchill. It's George Santayana. "What's past is prologue..."
Lala: Shakespeare! A tribute to Shakespeare. I ain't forgot what you taught me, Mr. Pierce. It's just the streets taught me, too.
(Lala shoots Jefferson in the shoulder, sending him falling to the floor.  Lala moves forward as Jefferson kneels on the ground in shock.)
Lala: I'm having a hard time reconciling my past. When I die, I come back, and what I've done comes back on me! And this time I heard a voice that said... I have unfinished business. Which brought you to me.
Jefferson: You gonna kill me?
Lala: I need answers. I need answers to my past. Why am I here? And that voice... that voice said it's about you and Earl.
(Cut to: an image of the past - a young man shoved through a basketball hoop in the Garfield High gym.)
Lala: Earl was like a brother to me. And that voice sent me to you. So you must've killed him. And you're gonna tell me why.

Agent Odell: She's not your kid. She doesn't need to be coddled.
Lynn: I'm not coddling her. I'm treating her like a human being, which is something you've clearly forgotten how to do.
Agent Odell: See, some people have dogs that they treat like members of their family. They dress them up in silly costumes and insist that the rest of us treat them like relevant members ofsociety. But they're not. They can, however, be useful tools. Dogs can sniff out drugs and landmines, but their relevance is solely dependent on their ability to be of service.
Lynn: Why are you telling me this?
Agent Odell: Because I'm not here to waste my sentiments on Wendy.
Lynn: (aghast) Waste?!
Agent Odell: She can't sniff out landmines, but she can do other things... for her government and her country, to keep its citizens safe. That's why she's here.
Lynn: (intensely) She's here to get stronger, healthier.
Agent Odell: She's here to realize her full potential for the benefit of all of us. Wendy could prove to be more revolutionary than the tank or the machine gun. But we absolutely have no time to waste. Do you understand what I am saying?
Lynn: That you don't like dogs?

Lala: I mean, looking to move up, make more money. He was supposed to be helping me out.
Jefferson: And?
Lala: He wasn't with it. So I looked out for him, got him a free pass.
Jefferson: Wait. If Earl had a free pass, then why'd they go after him?
Lala: You know why.
Jefferson: (sighs) I told Earl to tell the police about the One Hundred's business.
Lala:  And Tobias had some guys on the force. And when he found out about it, he put a hit out on Earl.
Jefferson: Did you warn him?
Lala: Nah, it was a wrap. Wasn't no stopping it. If Tobias want you got, it was a done deal. And I wasn't gonna let anyone kill Earl.
Jefferson: Then what happened?
Lala: (breathing heavily) I killed him myself. He was caught up. I mean, he was gonna get got.
Jefferson: Why'd you hang him in the hoop?
Lala: Because I ain't wanna be poor no more. I had to show Tobias that I was serious, and that I could send a message.
Jefferson: You need to turn yourself in.
Lala: There you go. No. I'm gonna make Tobias pay. And after that, it don't matter. "The past is always tense, but the future perfect."
Jefferson: Who said that?
Lala: Zadie Smith. She also said, "Every moment happens twice: inside and out, and there's two different histories." I'm sorry, Mr. Pierce. Thank you for everything.

Lala returns, having been resurrected again after his apparent death in 113. He claims that this time when he came back he heard a voice that told him to find out what happened to Earl.

Gambi is making Jennifer a supersuit. Lynn is worried about the whole process, particularly since Jennifer wants to sacrifice protection for style. Gambi is trying to achieve both.

Lala is still being haunted by the ghosts of his cousin Will and Lawanda White, who argue with each other. Nobody else can see the ghosts but Lala.

Agent Odell tells Lynn to stop coddling Wendy Hernandez and start pushing her to develop her powers. Lynn refuses. Later, when Lynn returns to her lab, she's been locked out and Agent Odell is pushing Wendy to create more and more intense wind, though she's clearly in pain.

Gambi is able to identify Todd Green from a partial image from the security footage at the free clinic. Unfortunately, his dead body is found just as Henderson is about to go pick him up.

Jefferson is able to use his powers to magnetically remove a bullet from his body and cauterize his own bullet wound.

Gambi says he may be able to identify what was stolen from the secret room in the free clinic by isolating the radioactive residue and then track it.

Jefferson shows Lala a picture of Earl from an old yearbook. This restores Lala's memory and causes him to realize he was the one who killed Earl in a bid to make sure he died painlessly.

Gambi finds an address for a foster brother of Grace Choi's. Anissa goes there and meets an older Asian man, who tells her to leave before bad things happen.

Grace Choi is revealed to be the older man and to have shape-shifting powers.

Lala remembers that he was the one who killed Earl after he went to the police. As he leaves Garfield High, he develops a new tattoo of Earl.

Jennifer is satisfied with the first rough design of her costume.

Jennifer tries on the costume in the protective sphere in Gambi's basement. It fails to work properly and soon starts smoking.

Anissa returns to the apartment in her Thunder costume. She finds several dead, rotten bodies (including what appears to be a horse) and fights Grace in her form as the older man.

Lala is revealed to have come back from the dead two months earlier.

Lala is told that in order to stop being reborn, he must untie the knot of his pain and find redemption. Only then will he know peace. He takes this to mean that he must kill Tobias Whale, to make up for all the bad things he did in the service of The 100.

Lala was a straight-A student before he joined The 100.

Agent Odell is revealed to have been spying on The Pierces with a special satellite. He kills all the ASA technicians who know about the spying besides himself.

An amazing episode, despite most of the subplots going nowhere and Lala's return coming out of left field. Still, it's a welcome surprise and his scenes are the strongest in the episode. It will be interesting to see how Lala's return changes the story of the rest of the season, though it's still unclear what to make of Grace and Agent Odell.
Posted by Starman at 1:29 AM