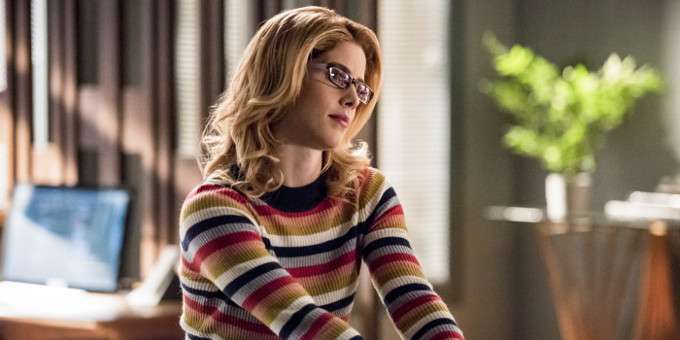 After months of covertly pursuing the mystery man called Dante, Diggle and Lyla finally have a solid lead on the elusive terrorist. The new Ghost Initiative team is deployed to find him, much to the annoyance of Oliver and Felicity, who have learned of Digg's plans for Ricardo Diaz. Meanwhile, Oliver tries to bond with Emiko by helping her to investigate her mother's murder. And in the future of 2038, William Clayton is confronted with the news that he has a half-sister and tries to win her over so they can find the missing Felicity together.

The Green Arrow comics of Benjamin Percy (character of Dante, character drama between Oliver and Emiko)

Adrian Paul is a suitably powerful presence as Dante.

The bullet which killed Emiko Queen's mother is said to be made of a rare promethium alloy. In the DC Universe, promethium is a rare metal which comes in two forms - depleted and volatile.

In the modern day DC Universe, promethium is one of the five heavy metals born of the Dark Multiverse, along with Nth Metal, Dionesium, Electrum, and Batmanium.

ARGUS discovers that Dante is having a meeting with Princess Noor Harjavti of Qurac. Diggle says he believes that the Princess is planning a revolution and may be asking Dante for help financing it. In the DC Comics universe, Noor Harjavti was a character introduced in the Captain Atom comics as the daughter of the dictator of Biayla and leader of her nation's Freedom Council.

The Arrowverse version of Princess Noor Harjavti seems to be based upon a version of the character introduced in the Young Justice animated series. In this reality, her father was the ruler of Qurac rather than Biayla.

The bullet which killed Emiko's mother was made of a rare promethium alloy used by a handful of black market weapons manufacturers and fired from a customized rifle.

Oliver: (To Emiko) I understand that my parents weren't exactly the best people, but if they taught me one thing, it's the value of family, which is what you and I are. So if someone's hurt you, you better believe they've hurt me, too.

Mia: If you're here to convince me to join your little merry band of heroes, save your breath.
William: Actually, I was just hoping that we could commiserate about how much our parents suck. I never had anyone to do that with before.
Mia: What do you have against our parents? Seems like you came out all right. You're super rich.
William: Well, let's see. Oliver, being my dad, got my mom killed. Then he and Felicity promised to stay in my life after my grandparents took custody, and then I never heard from them again. And my whole justification for it, you know, that it's hard for publicly recognized vigilantes to raise children, sort of went out the window when I found out they actually had another kid, which means that they just didn't want me.
(There's a long pause as Mia regards William.)
Mia: Being the kid they wanted wasn't so great either.

Emiko: It's been hard for me not seeing you as him.
Oliver: Him being our father?
Emiko: I just assumed I shouldn't trust you. That's why I've been keeping so much distance between us.
Oliver: Then you give me a chance, and I, of course, immediately overstep.
Emiko: Pretty much.
Oliver: I've lost a lot in my life. People, you know? But with you, I lost time. So you gave me a chance, and I immediately saw it as an opportunity to get some of it back. But there was no excuse for the way that I behaved when I was coming aboard your mission. I'm sorry.
Emiko: I didn't realize Oliver Queen did apologies.
Oliver: Well, I mean, I didn't, but... I've grown a bit over the years.

Felicity has a nightmare of Diaz chasing her through the woods which mirrors the nightmare Oliver had of Felicity and William being hunted by Diaz in 701.

Oliver has been trying to call William and has filled his mailbox with voice-mails.

Rene tells Oliver that Zoe froze him out of her life when he first lost custody of her.

Dinah is still in the hospital after being attacked by the Star City Slayer. She has tried checking herself out several times.

Oliver approaches Emiko with the bullet used to kill mother.

John Diggle tells Oliver and Felicity about The Ghost Initiative program and Diaz's role in it.

Felicity begins plotting with Black Siren to trigger the bomb in Diaz's head, but Black Siren tries to talk her out of it, saying it isn't worth the risk.

Black Siren guesses Felicity is pregnant, based on the fact that she's skipping the usual wine and coffee that accompanies their meetings and she is eating more chocolate than normal.

The Ghost Initiative is ambushed at their meeting with Virgil, who was apparently tipped off as to the meeting being an ARGUS operation.

ARGUS' analysis of Diaz' phone call to Virgil fails to detect any code phrases or suspicious words indicating he delivered a secret warning.

Virgil carried a replica of a Italian Florin circa 1300 which contained a heavily encrypted microchip.

Andrew Thornton is a black market weapons dealer who specializes in promethium-based custom weapons. Oliver thinks he is the one who made the gun that killed Emiko's mother.

Oliver is able to arrest Thornton, but Emiko intervenes and tries to question him despite Oliver having taken control of the raid on Thornton's latest arms deal.

Diggle finds fake diplomatic credentials for the Qurac Embassy on the microchip. This leads him to believe that Dante will be meaning with the Quraci princess.

Diggle recruits Oliver and Felicity to help with the operation to capture Dante.

Lyla and Diggle discover that the mole in ARGUS is Deputy Director Bell, who is meeting with Dante and the Quraci Princess.

Diaz attempts to blow the operation by warning Dante it is a set-up, as a means of paying off his debt.

Dante kills both Deputy Director Bell and the Princess. He is shown to be a skilled knife-fighter, both in throwing them and hand-to-hand combat.  He is able to knock Oliver Queen's arrows out of the air in mid-flight and can hold his own in a one-on-one battle.

Dante is able to escape after Diggle chooses to stop Diaz from escaping.

Felicity chooses not to kill Diaz, despite being given the chance.

Diaz is sent back to Slabside for violating the terms of his release.

The Ghost Initiative is shut-down for good.

Diggle chooses to take the blame for The Ghost Initiative being reactivated to save Lyla's career and to give them a chance to find out what higher-ups above them might be tied to Dante. He does this despite knowing it will end his career at ARGUS.

Oliver gives Emiko a copy of the police report for Andrew Thornton's interrogation. He apologizes for pulling rank regarding the investigation and they seem to reconcile.

Felicity tells Oliver that she is pregnant.\

Dante has a previous relationship with Emiko Queen and tells her that he is happy she's reconciled with her brother and that it is time for her to go home.

Diaz is attacked in his cell at Slabside, doused in flammable liquid sent through the sprinkler system and set on fire. The final scene of the episode suggests he is dead, as his screams go silent.

In 2038, Dinah Drake, William Clayton, Roy Harper and Zoe Ramirez had no idea that Oliver Queen and Felicity Smoak had a daughter together, much less that she was Blackstar.

Connor Hawke also reveals that his father knew about Mia Smoak's existence and asked him to keep an eye on her because of who her parents were. Mia thought Connor was ignorant of her parentage.

Mia Smoak says that her mother has faked her death and gone into hiding several times before and that Felicity is crazy paranoid.

Paul Loiseau is the sole witness to Felicity Smoak's death. He committed suicide about the same time William and Roy began searching for Felicity.

William says that neither Oliver nor Felicity ever contacted him after he moved in with his grandparents. He had assumed it was because they decided there was no place for a child in their lives... until he found out Mia Smoak existed. (We know this is a lie from a scene earlier in the episode where Oliver is seen trying to call William. Presumably his grandparents intercepted all of Oliver's calls and letters.)

Mia says that she never knew her father and all she knows about him comes from old news reports and Felicity's stories. She asks William if he really was a hero and Williams says he was.

Mia shows William another configuration of his Rubik's Cube - a cube in a cube in a cube. This reveals a secret compartment containing an analog micro-cassette from an old-fashioned answering machine.

A halfway decent but rather odd episode. Despite the title, most of the plot deals with ARGUS and Dante. Yet most of the best scenes involve Mia and William in the future and the best dialogue is in the Emiko and Oliver scenes, which are mostly just them standing around and talking. The action scenes are competently executed, but hardly exciting as we've no reason to care about the characters involved. (Seriously, does ANYONE care about Cupid or China White at this point?)   I'd give it a higher rating for finally killing of Diaz, but I refuse to believe the show suddenly developed the good sense to kill him off with an appropriate and ironic death.
Posted by Starman at 10:49 PM