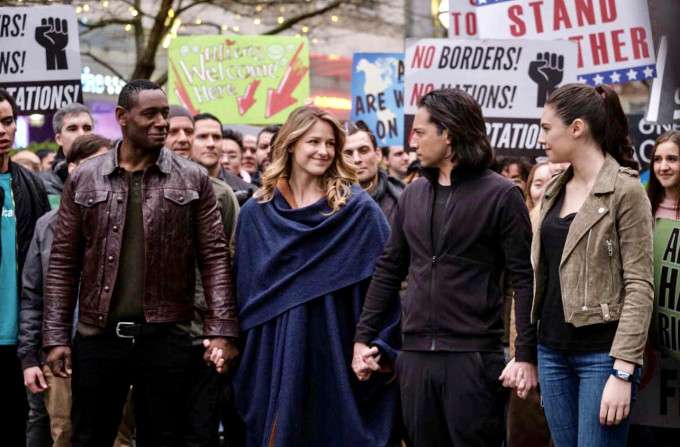 Between Ben Lockwood's efforts to empower the anti-alien movement and The Elite's desire to bring down Lockwood and his followers, Supergirl is more worried than ever about the safety of the American people and innocents getting caught in the crossfire. When Lockwood organizes a Children of Liberty recruitment drive under the guise of a patriotic rally as J'onn organizes a peaceful counter-protest and The Elite plan to attack it, Kara may finally be forced to make a public stand. Meanwhile, James plays photographer to cover the rally as Alex finds herself being assigned to a task by Col. Haley that goes against her beliefs.

This episode was clearly inspired by the real-world Charlottesville Unite The Right rally held on August 11 & 12, 2017 and the following riots.

The idea of the baby sun-eater was taken from All-Star Superman.

Kara gives Nia a hard time about getting in Menagerie's face and threatening her but says nothing about J'onn doing the same?

Reassigning the director of a federal organization to act as a security guard seems like a total waste of resources and the excuse that Alex has more experience than anyone fighting hostile aliens doesn't ring true either since most of The Elite aren't aliens. (Since when has President Baker cared about wasting resources?)

The Hat is able to teleport The Elite to The Fortress of Solutude but he said last week he couldn't go places he hadn't already been.

Why do Kelex or none of the other security protocols inside the Fortress of Solitude react to The Hat and Manchester and the Morae?

Why do Hat and Manchester make a great show of falling out in the Fotress when they have no reason to believe they are being watched? Their whole scene makes no sense outside the context of the television show needing us to believe Manchester is honestly dead.

There is no way a protest march would be allowed to enter the same building as the rally said march was protesting. (Unless Alex intentionally screwed up the perimeter security...)

While Mad World is probably the most over-used song for this kind of montage, the scene of James taking pictures of the riot while Kara and Dreamer try to help people IS well staged.

The key to the Fortress of Solitude is made of dwarf star material and weighs around 500,000 kilograms (i.e. 500 tons )

Much as in the comic All-Star Superman, the Arrowverse version of Superman is revealed to have a pet sun-eater, who lives in a room in the Fortress of Solitude. It feeds on the chemical mass of small stars, which Superman makes himself using a cosmic anvil and an atomic hammer. Kara says it's basically a living bomb.

The "Us or Them" speech started by Ben Lockwood at his rally is based on an actual chant used by neo-Nazis during the Charlottesville Riots.

Lena refuses to run human trials until the purification rate of her serum is 90% or higher.

Hat takes two items from the Fortress of Solitude - a crystal wand he says will let them activate all their aliens brothers and sisters and am amulet he says can do even more. The wand is later shown to be able to create holographic clones and illusions.

Manchester takes a belt that seems to give him some kind of protective force-field.

(J'onn is watching the sleeping Dreamer.)
J'onn: (whispering) Have you told her she doesn't have to wear the suit in private?
Kara: (chuckling) It's just a phase. I did the same thing when I became Supergirl. I practically slept in my suit.

James: It's just important to remember what we do here every day. Reporting on events like this - taking the risks to show all sides and showing the humanity there? It's nothing less than heroic. I mean, think about it - you fight injustice with your firsts?  You help one - maybe a dozen people. But good journalism? That can impact millions. That's why we became journalists in the first place, right?

Brainiac-5: I think it would mean a lot to have Supergirl march today.
Kara: I wish I could, Brainy, but I think its more important for me to patrol in case anything gets out of hand.
Brainiac-5: It won't. (dramatically) I am AmericanAlien. Hashtag American Alien.
Kara: You... you organized it?
Brainiac-5: When I lost my Legion ring, I realized how much I depended on it for strength and confidence. I thought it's hat made me a hero. But not having it these past few days has made me see it wasn't my ring that gave me strength. It was fighting alongside all of you, helping to make the Earth a better place. In times like this change won't come from someone with a ring or a cape. It will only come when each one of us answers the call to stand up and be heard. El Mayara - Stronger Together.
(Brainiac-5 glances at Dreamer, and sighs a bit as if hesitating to say something.)
Brainiac-5: Just because we're superheroes doesn't mean we forget who we are.
Kara: I'm sorry, Brainy. The risk is too great.
Dreamer: Ready!
(Brainiac-5 looks at Kara again, disappointed.)
Brainiac-5: Supergirl may be a symbol. But more importantly she's a citizen of Earth. Like the rest of us. Remember that.

(Supergirl confronts one of Lockwood's men - the one she saved at his first speech - as he his heckling the pro-alien protesters.)
Man: Supergirl?
Supergirl: What are you doing here?!
Man: We're here to show our support for the repeal of Alien Amnesty.
Supergirl: But that amnesty is what gives these aliens their rights.
Man: Why should they get any rights? They're just here to hurt us.
Supergirl: They're not - look at them! They're not here to hurt anyone! Most of them are fleeing from war and violence, just like I did when I first came to Earth.
Man: They're not like you. You're a superhero.
(Kara's jaw actually drops.)
Supergirl: No, you're wrong. I'm just like them.

Eve Teschmacher: Well, I guess tomorrow is another day.
Lena: Tomorrow may be too late.

Dreamer, Supergirl and Martian Manhunter capture Menagerie as she's in the middle of stalking a rich woman with fancy jewelry. She is turned into the DEO.

The Elite attempt to assassinate Ben Lockwood at his first speech as Director of Alien Affairs.

James asks Eve Teschmacher about the black budget at L-Corp. Eve says she'll have to get permission from Lena to share it with him but she says the budget is only there to hide proprietary science from the company's competitors.

Col. Hayley demands that Lena speed up the process for human testing on her serum, saying that she needs her soldiers to be superhuman soon.

J'onn says that something about Manchester pushes his buttons and is making him come close to losing control.

Lockwood announces that he is moving to repeal the Alien Amnesty Act and start arranging the mass deportation of aliens from Earth. Legally, he has no power to do this, but he certainly has the capacity to rally people to lobby their congressional representatives to repeal the law.

Dreamer has a dream about the balcony opposite where Ben Lockwood had his rally the night before.  It is here that Kara finds a Morae claw, which J'onn can use to track the Morae psychically.

A pro-alien rights rally is organized by someone called AmericanAlien on-line.  Col. Hayley tasks Braniac-5 with figuring out who they are and what their intentions are. Brainiac-5 says that it will bot be easy, as whoever they are is a master of encryption.

Hat was told where to find The Fortress of Solitude by his friend "Mixy". This may be a reference to Mister Mxyzptlk, whom Kara fought at the Fortress in 213.

It is confirmed that Hat's powers come from the Fifth Dimension, but he does not seem to he an imp. Instead, he seems to just have a magic hat.

Hat has access to a pair of gloves that let him increase his strength enough to lift the key to the Fortress of Solitude.

The Morae sides with Manchester.

Dreamer is able to use her powers to augment J'onn's clairvoyance. This leads her to see Manchester in the Fortress of Solitude.

Supergirl turns the Morae into the DEO.

Brainiac-5 is placed in charge of organizing a DEO team to be embedded within AmericanAlien's protest rally and coordinating with Alex to make sure that people are kept safe.

J'onn says he can no longer sense Manchester's anger.

J'onn tries to search for Hat psychically, but he guesses that Hat is hiding in the Fifth Dimension.

Franklin - the Dryad from 402 - is sent to cover the rally for CatCo.

James decides to work as a photographer to cover the rally.

Brainy asks the rest of the team to march in the pro-alien rally. J'onn agrees, but Kara says she and Nia should be on patrol and look for trouble.

Brainy reveals that he is AmericanAlien and that he organized the march.

Alex evacuated Ben Lockwood from the rally once he has the crowd worked into a frenzy.

Manchester Black and Hat are revealed to have faked their display in the Fortress of Solitude and Manchester was teleported away to the Fifth Dimension after seeming to run into the sun-eater room.

Brainiac-5 and Supergirl are able to subdue The Hat.

Dreamer saves Franklin the Dryad from one of the Children of Liberty.

Manchester tricks J'onn into venting his anger on a Child of Liberty holographically altered to look like him.

The Child of Liberty follower Kara spoke to is later shown helping save an alien in the middle of the riot. He thanks Supergirl for saving him again and she thanks him in turn.

Manchester escapes in the confusion.

James says that the protest marches in Metropolis and Gotham were peaceful.

Ben Lockwood announces that he and the President agree that they should hold Congressional hearings regarding repealing the Alien Amnesty Act before making any decisions.

Col. Haley tells Alex that she appreciates her not letting her politics get in the way of her doing her job.

Col. Haley complements Brainiac-5 on the job he did managing the protest and says it's a good thing AmericanAlien was a good guy.

The implication is that Col. Haley knows that Brainiac-5 was American Alien and that Alex only allowed Lockwood to speak until he was officially inciting a riot.

Col. Haley tells Lena there is no rush on getting the super soldier program finished now.

Unable to find Manchester Black using his father's methods, J'onn declares that he will find him as a Manhunter.

James is shot by an unseen assailant in his office at CatCo.

On the one hand, this episode has a lot of logic problems, The Elite are defeated way too easily after having just been established as a major threat and Manchester Black undergoes the worst bit of character assassination ever.  Col. Haley is back to being a decent person after being depicted as a military hardliner but a fair one or a total fascist depending on the writer. And Lena is just sorta... there.

On the other hand, the acting manages to make-up for a lot of this and some of the individual scenes are good, even if the performances have all the emotional flow of a roller-coaster. Still, it could be far worse, and what it does well it does very well.
Posted by Starman at 11:49 PM