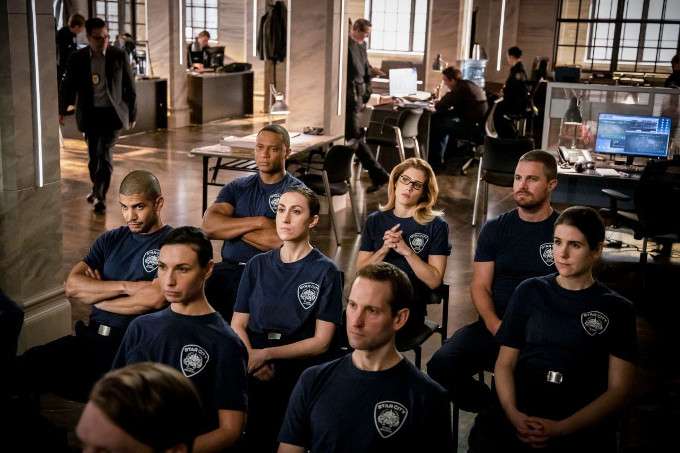 With tensions high between the newly deputized Team Arrow and the Star City Police Department once charged with bringing them to justice, Oliver Queen hopes a training day for himself and his teammates will help bring people together. Unfortunately, things go wrong almost immediately and Dinah gets some life-altering news.

Meanwhile, in the future of Star City 2038, William and Mia - now aware of what they are to each other - continue their search for Felicity, but can they find a way to mesh street-smarts and tech-smarts to get what they need to play Felicity's latest message?

The 2001 film Training Day. (title, base idea of rookie cops first day at work going awry) and Green Arrow: The Longbow Hunters (Dinah losing her powers after having her throat slit)

Why didn't Mayor Pollard just scrap the whole Deputized Vigilante program immediately after Oliver threatened a CEO with an acid swirly? It was just the excuse she'd been waiting for and there's no reason for her no to have thrown the book at Oliver then and there apart from there still being half an hour of episode to pad out.

There's very little about Black Siren's attempt to blackmail Emiko that makes sense. First, how did she learn that Emiko is the new Green Arrow in the first place? Next, why on Earth does she think Oliver and Team Arrow would disapprove of Emiko killing Diaz enough for it to ruin their relationships, when she was helping Felicity to plot Diaz's murder just last week? Finally, there's no apparent purpose to said blackmail and no apparent reason Black Siren would need leverage over Emiko.

Oliver's attitude is all over the place in this episode. He starts off being determined to give the new SCPD partnership a chance. Then he gets sick of the bureaucracy after one batched raid. Then he's threatening to dunk crooked CEOs into acid vats. Then he's ready to break the law and go back to being an unlicensed vigilante even if he can't keep it up forever. Then he's willing to give the partnership thing a try again. And then by the end of the episode the team is back in their old base with their own costumes and gear and it hasn't mattered in the slightest because the mayor was finally embarrassed into striking down the anti-vigilante law.

Once again, Juliana Harkavy steals the show, giving a powerful performance as Dinah Drake faces an identity crisis. Denied her powers, she throws herself into her role as a police Captain and finds herself butting heads with her teammates as she struggles with her own sense of identity and self-worth. It's deep stuff and well-handled.

Autopsy results on the four Los Halcones gang members  revealed traces of an unidentified substance, which caused a chemical reaction with the blood that resulted in toxic epidermal necrolysis - i.e. their skin melting off.

Chlormethine is a cytotoxic agent derived from mustard gas. It's illegal to manufacture except for medicinal purposes, like chemotherapy.

Felicity is able to alter her security system algorithm to track DNA anywhere in Star City.

(The SCPD rookies are being addressed by Sergeant Bingsley and Captain Dinah Drake.)
Sergeant Bingsley: Wearing the uniform of an SCPD officer is an honor. It isn't just a uniform. It's a symbol of the law, of justice, of transparency.
Dinah: Thank you, Sergeant Bingsley. Any questions?
(Rene raises his hand.)
Dinah: Rene?
Rene: He does know we have our own uniforms, right?

Oliver: Have I told you lately how smart you are?
Felicity: Well, I never get tired of hearing it.

Dinah: There is no more vigilante way, okay? There is only the SCPD way. It's my job to enforce it.
Rene: Look, I get it. You're the captain, but you're also the Black Canary. I thought that came first?
Dinah:  It doesn't.
Rene:  Since when?
Dinah:  Since I stuck my neck out to make this partnership work. Vigilantes cannot operate without SCPD sanction. The sooner all of us understand that, the better it's gonna be for all of us.
Rene: Everyone's got something at stake here, D.
Dinah:  But if this fails, I'm the one who loses my job. It's my ass on the line. I don't understand why this is so hard for all of you to understand.

Rene: I've know you a long time, D, and I've never seen you roll over the way you just did with Pollard.
Dinah: She's the mayor, Rene. And she can put an end to this whole operation anytime she wants.
Rene: That's not the point. You've been yelling at me, been yelling at Oliver, and pretty much acting weird ever since the weapons buy. So what's up, D? What's going on?
Dinah: At the weapons buy, I tried to use my cry, but something went wrong. It didn't work right. It It hurt like someone was scraping knives along the inside of my throat.
Rene: I'm sorry.
Dinah: Being captain is the only thing I have left. I can't be the symbol of being on both sides, both SCPD and vigilante, because I am I'm not the Black Canary. Not anymore.
Rene: That's a bunch of crap, and you know it. Your cry doesn't make you the Canary. Did you know that the pin you gave Zoe, she wears to school every day? You think she wears that pin because of your cry? No. She looks up to you because you're the person who will go above and beyond to do what is right no matter the personal consequences. That's who you are no matter what.
Dinah: Even if that's true, it doesn't matter anymore.
Rene: Of course it does. You say you can't be the symbol of being on both sides. That's exactly what you are.

Felicity (on tape): William and Mia... you know, this is the first time I've ever said your names together? 20 years and I avoid ever saying your names in the same sentence. It feels like the work of a paranoid, overprotective mother. I guess we really do turn into our parents. I'm rambling. Sorry. Not just for the rambling. For everything. But mostly for keeping the two of you apart. I'm not asking for your forgiveness but just know that your father and I did it to protect you. We did it because we love you. Now that you've found each other, I just have one request. Give these coordinates to the team: 47. 6119 North, 122. 3301 West. And then get the hell out of Star City. And whatever you do, don't come looking for me.
Mia: So we're ignoring her?
William: Definitely.

Oliver, Felicity, John and Rene are all going through SCPD basic training to learn basic police procedure so they can all work as deputized vigilantes.

Los Halcones are the arch rival gang of the Blackout Gang - a new gang that showed up in Star City after Oliver Queen went to prison.

Four Los Halcones were found dead in a warehouse, killed by strange new bullets that melted their skin.

Black Siren is contacted at the DA's office by Bronze Tiger, who was last seen in 707.

Bronze Tiger tells Black Siren that Ricardo Diaz was killed but that the Slabside Penitentiary staff are trying to cover up just how it happened, saying he was shived. He says he can give Black Siren the truth in exchange for having his the work on his pardon stepped up.

When Black Siren says she is already working as fast as possible to get him released, Bronze Tiger agrees to trade his information in exchange for a chance to see his son without a window in between them.

During the raid on the Blackout Gang's weapons buy, the police overhear that Midas Medical made the bullets.

Felicity determines that the melting-bullets used by the Blackout Gang make use of chlormethine.

Midas Medical is one of four firms on Star City who make chlormethine.

Oliver scares a confession out of James Midas - the owner of Midas Medical. It is ruled inadmissible and Midas is released, getting a personal apology form Mayor Pollard on the way out of the police station.

Black Siren makes good on her deal and Bronze Tiger is allowed to see his son, whose first name is Connor, and whom he calls "my little Hawk." The suggestion here is that Connor will become Connor Hawke and be adopted by John Diggle in the future.

Bronze Tiger tells Black Siren that he was confined in solitary across from Diaz and saw the person who set him on fire was dressed like Green Arrow but wasn't Oliver Queen through his open meal slot.

Felicity fixed up the old Team Arrow bunker on the sly. She and Oliver decide they are going to operate outside the law again.

They ask Diggle to join them, but he urges them to give working with the police another chance.

Diggle finds out that Felicity is pregnant.

Dinah and Rene are brought to the bunker and agree to try and work with the police protocols, using their old costumes and gear. This time, they catch James Midas in the act without issues.

Thanks To Mayor Pollard's relationship with Midas, Dinah is able to get her to not only allow Team Arrow to be established as a special SCPD task force but gets permission for them to operate from the bunker.

The anti-vigilante law is also repealed.

John gives Felicity a bag of ginger candy chews, saying that Lyla swore by them during her own pregnancy.

Black Siren summons Emiko Queen to her office and says she knows that she killed Ricardo Diaz and is the new Green Arrow.

Emiko Queen, in turn, reveals that she knows Black Siren isn't the real Laurel Lance. She also says that Team Arrow wouldn't believe Black Siren if she tried to tell them about her.

Felicity says that if they have a boy she wants to name him Lucas.

Oliver says that if they have a daughter, they should name it Mia - short for Moira.

William finds a mini-cassette player in the black market, being sold by a man named Felix. He bargains Felix down to $500, only to have the player pick-pocketed by a young girl in Felix's employ.

When Mia learns of this, she threatens Felix, only for him to respond that he's bribed the local SCPD officers to come running if he needs help.

William is able to hack the SCPD comms and fake a Black Canary sighting. This distracts Felix's back-up long enough for Mia to smack him down and William to take what they need.

Felicity apologies to Mia and William for ruining their lives and gives them a set of coordinates to pass on to the vigilantes. She then tells them to get out of Star City and not to look for her.

The coordinates lead to somewhere inside The Glades. Both William and Mia agree to ignore Felicity's instruction to abandon her or Star City.

A disjointed and rushed piece of filler that exists only to restore the status quo of early Season 6 as quickly as possible. Team Arrow is back. Long live Team Arrow. At least until everything that is due to go south in the immediate future happens.

That being said, Dinah's subplot is well-handled and well-acted and the show handles her depowerment as well as could be hoped. Unfortunately, the rest of the episode seems to be a distraction from what should be a much bigger deal. Still, the good parts of the episode far outweigh the bad and it's rather enjoyable even if the character arcs make no sense at all.
Posted by Starman at 2:15 PM