Black Lightning Episode Guide: Season 2, Episode 15 - The Book of the Apocalypse: Chapter One: The Alpha 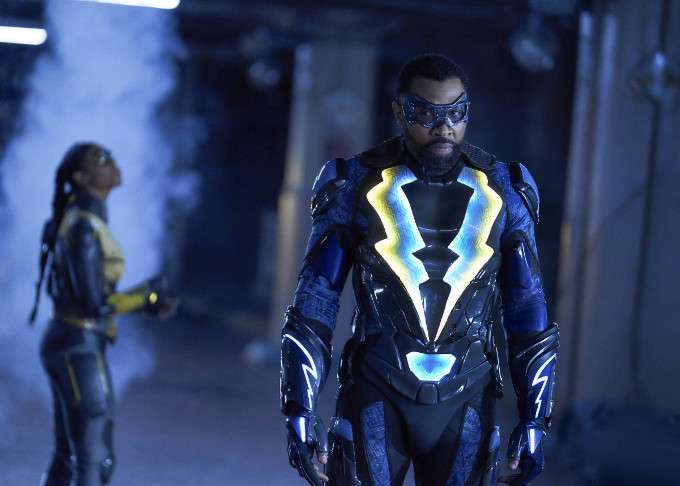 Jefferson begins trying to instill his superhero code into Jennifer, but his youngest daughter refuses to give up on the idea of revenge on Tobias for killing Khalil. Meanwhile, Lala continues his own plans for revenge as Anissa continues the search for Grace and Lynn attempts to acclimate Wendy Hernandez to the modern world.

Batman and the Outsiders (Tobias Whale trying to become a metahuman soldier trafficker, the Masters of Disaster)

Honestly, the whole ensemble is doing so well here it's hard to single anyone out this week.

The final three members of the Masters of Disaster are introduced in this episode, after Shakedown was previously introduced. They are Joe a.k.a. Heatstroke (fire controller), Rebecca"Becky" Jones a.k.a. New Wave (water controller who can also become pure water) and Darryl Robinson a.k.a. Coldsnap (ice controller).

In the original comics. Joe was a woman named Joanne and New Wave was the team leader, but the powers and names are otherwise the same.

Gambi theorizes that the radioactive signal he found at the free clinic came from the power supply sustaining the pods. The signal is very low level and can't be tracked by satellite, however Gambi installed Geiger counters around Freeland, hoping to triangulate a location by detecting radiation on the wind.

The material making up Jennifer's costume absorbs and disperses electrical charges, so as not to add to her natural bio electricity. Gambi hopes this will keep others from overloading her.

(Jennifer is trying to justify killing Tobias.)
Jennifer: Freeland would be better off if he were permanently gone.
Jefferson: You don't mean "permanently gone," you mean "dead. " And, it's not about whether he deserves it, though the Good Book says it is not our decision to make.
Jennifer: It also says "an eye for an eye."
Jefferson: Which is an idea older than the Bible, Jen. Hammurabi's Code. It was meant to limit vengeance, not justify it.
Jennifer: Khalil died because you put him out front. Doesn't that matter?
Jefferson (sighing): You know, I have had a long time to think about my powers, Jennifer. Some days I feel like I have it all figured out, but most of the time, I have no idea No idea why God saw fit to put this burden on me. The only thing I know for sure is that those with the greatest power should not be able to decide who lives or dies. No, that is a path that can only lead to darkness.

Cutter: So, who should we choose?
Dr. Jace: Marcus is too weak, thanks to you.
Cutter: He's an ass anyway. I like Rebecca, but I don't think sending a woman would appeal to your target audience.
Tobias: Hmm. Men can be stupid that way.
Cutter: I vote for Joe.
Dr. Jace: His powers will look good on camera, that's for sure.
Tobias: Joe it is.

A Green Light user known as Cape Guy is gunned down by the Freeland Police after he accidentally generates a magnetic storm  He was a former solider who turned to Green Light to cope with his PTSD and then became a superhero after he developed powers.

Jefferson comes up with a code of three rules for himself and his daughters to follow in costume. Rule #1 is no revealing who they are to anyone outside the family. Rule #2 is no hero business without back-up. (Gambi does count as back-up.)  Rule #3 is no killing. Both Anissa and Jennifer agree to the rules.

Dr. Jace revives the rest of the Masters of Disaster - Coldsnap, Heatstroke and New Wave.

Agent Odell is still spying on the Pierce family.

Lynn says she has no way of knowing if the Green Light Babies are still alive after having been moved.

Dr. Jace says it will be two weeks before the Green Light Babies are ready to be revived.

Lazarus - the man who resurrected Lala - tells him that Tobias killed Lady Eve.

Lynn makes arrangements for Wendy Hernandez to speak with Perenna and Jennifer about their powers as a form of therapy.

Lazarus gets Lala a gun.

Tobias unleashes Heatstroke on Freeland to demonstrate the power of his product in a live video on the dark web.

Black Lightning and Thunder are able to stop Heatstroke.

Gambi tracks down Tobias location and goes to watch it until Jefferson is freed up.

Lala shows up at Tobias' lair and shrugs off Cutter's attacks.

Jennifer hacks Gambi's computer and goes to the location in her new costume.

Cutter and Tobias flee their hideout just before Jennifer arrives.

The episode ends with Jennifer overheating after landing outside Tobias's lair.

This doesn't feel like the next to last episode of the season. Most of the subplots are touched upon but nothing really moves forward at all.  The cliffhanger more than makes up for it, though.
Posted by Starman at 6:02 PM