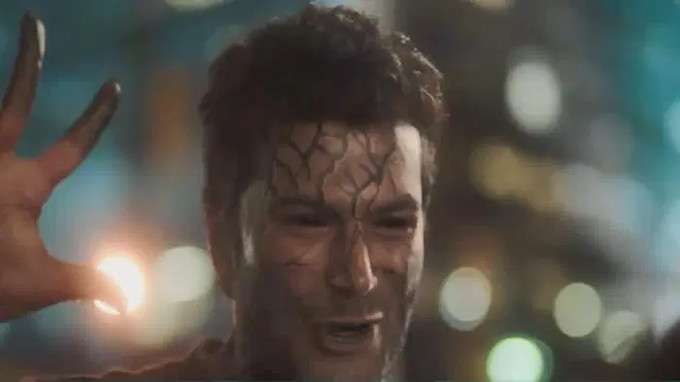 As Iris and Cisco try to help Barry win free of Bloodwork's influence, the rest of Team Flash must protect Central City from the army of "Blood Brothers" that Bloodwork has built.

The zombie movies of George Romero.

Everyone is suddenly using the term "Blood Brother" to describe Ramsey's followers, even though they aren't in communication and the term was never used before this episode.

While Cecile's powers enable her to sense the fear in the Blood Brothers/Sisters, the range makes it incredibly inefficient for zombie detection purposes as you can easily hear and see the zombies before Cecile can pinpoint their location.

The CGI for Bloodwork's monster form is pretty lousy and doesn't even look like the design from the comics.

The Flash logo in the title stinger drips with black blood.

Cisco developed a 2.0 version of the Babel Protocol - the self-destruct mode that he programmed into Barry's costume. The new plan creates a force-field around STAR Labs that a speedster cannot phase through. Unfortunately, it also blocks any comm signals from going into or out of STAR Labs. They can still use the extrapolators to enter and exit the building, however.

Frost has an analog police scanner, which apparently still functions through the STAR Labs force-field.

Cisco was working on a photon emitter - a ray gun that could deliver megadoses of photon radiation, which is usually administered to cancer patients. He theorizes he can use this to cleanse Ramsey of his sentient infection. Unfortunately, he has no way of knowing it will work before he tests it and he could wind up flash-frying anyone he aims it at.

A 207 is the police code for an abduction in Central City.

Cisco can use the extrapolators as listening devices.

(Nash Wells regards the barrier he found - the one carved with seven strange symbols.)
Nash: I'm coming for you.
Voice: You seek the truth.
(Nash pauses as the voice echos through the cavern. He smiles.)
Nash: Novu.
Voice: If you wish to know all, show your allegiance and all will be revealed.
Nash: Yeah, that sounds great. (sarcastically) Oh, wait. No, I don't barter with false gods!
Voice: Bow down to me and all you desire shall be yours.
Nash: (shouting at the barrier) Let me in. Let me in!
Voice: Bow down to me!
(The walls shake as the voice speaks. Nash only laughs.)
Nash: Planet after planet Earth after Earth I've tracked you, Novu, and you think some paltry mind games and a little rock wall is gonna stop me. You've got another think coming. I'm coming for you. And you can't stop me!
(The walls shake again, This time the lights in the tunnel go out. Unbeknownst to Nash, this coincides with the power going out around Central City because of Bloodwork.)
Nash: Hmm. What's this now? Punishment from an angry god? Or simply faulty wiring?
(Nash holds up what appears to be an advanced electric flare.)
Nash: I say, let there be light.
(Nash turns around and almost runs into a hissing Blood Brother.)

Cecile: HR Wells told me once "Barry Allen's superpower isn't speed. "It's hope. It's hope, and that kid has an endless reservoir of it." I didn't know how right he was until I really got to know you, Barry. Whatever is about to happen, this world's a better place for having you in it.
Caitlin: You know, when you first came into my life, I had lost faith in just about everything. You saved my life, Barry.
Cisco: God, I remember the old days. No doppelgangers. No Flashpoint. No time travel. It was just us against the bad guys. I miss that.
Iris: I don't know, I kinda like time travel. When you were stuck in the Speed Force, I would have Cisco vibe me to the Waterfront so I could watch our first kiss. You know, the one you had to erase from the timeline to save the world.
Barry: Why'd you do that?
Iris: I don't know. I guess when you're filled with sadness, happy thoughts are what get you through the day. And what's happier than getting half your first kiss with the love of your life other than getting to do it twice?
(Barry kissses Iris' forehead.)
Iris:  Our love story never ends, Barry. Not even with Crisis.
Barry:  Iris, it's inevitable.
Iris: Maybe. But whether you vanish or or worse, I am gonna be there with you. I'm gonna be right there with you to the very end, okay? Because the only thing more inevitable than Crisis is us.
(Barry nods.)
Barry: Iris is right. Whatever's in store for us, they can't change what we mean to each other. Can't erase what's in our hearts. As long as we hold on to that we've beaten Crisis before it even begins.

Nash Wells: For so many years, I've traveled across worlds across the multiverse, to do one thing. Kill you. And now here you saved my life.
Voice: Submit and begin your life anew.
Nash Wells: Show me.
Voice: The knowledge is within you.
(The symbols on the barrier begin to glow. Nash presses them in a certain order and the glow fades. For a moment nothing happens and Nash looks disappointed. Suddenly, the barrier slides up revealing a golden light. Nash gasps as the light envelopes him and pulls him in, leaving him screaming as the barrier slams down, leaving the cave looking as it did before.)

Cecile's new office for her legal practice is in the same office building as Ralph Dibny's detective agency and the Central City Citizen.

Kamilla and Cecile start trying to sneak out of their office together, avoiding the Blood Brothers as they do so.

Frost leaves STAR Labs and helps Joe in trying to subdue the Blood Brothers. They confront Bloodwork and The Flash, who say that neither of them shall be blessed with eternal life.

Nash Wells is in the middle of trying to get to the Monitor's portal as the invasion is going on. He winds up fighting several Blood Brothers in the sewers.

Cecille is able to detect the immediate presence of Blood Brothers due to the fear they were feeling when Bloodwork took over. Unfortunately, the presence of too many of them leaves her paralyzed.

Barry seems to speak to Iris through the police band, telling her to meet him where she said yes - where their life together began. This leads her to return to her and Barry's loft apartment, where Bloodwork is waiting for her.

Bloodwork is revealed once again to have the ability to access the memories of his Blood Brothers and to replicate their voices in his own body. This allowed him to speak through Barry, as Barry, using information only Barry would have.

Bloodwork offers to make Iris immortal so she can be with Barry forever. She refuses. Bloodwork is about to vibrate Barry's hand through her chest but he suddenly stops, says that can happen in due time, just before saying "Trust me, Iris." and running off.

Allegra Garcia saves Frost and Joe from a group of Blood Brothers. Unfortunately, Joe is wounded in the fight.

Cisco attacks Bloodwork with the Photon Emitter. Unfortunately, one hit from The Flash is all it takes to destroy it. Bloodwork says he isn't going to kill Cisco, because he needs him to become his messenger and prepare STAR Labs particle accelerator so he can use it to transform the whole city into Blood Brothers at once. He then says, curiously, that he knew he chose the right guy for the job.

Caitlin determines that Joe has a nicked spleen and the only thing capable of keeping him preserved is Frost's ice powers slowing his circulation. Unfortunately, Frost is freaking out at the prospect of trying to do anything medical anymore, even with Caitlin guiding her.

As Iris and Cisco discuss how they should have worked together from the beginning, it occurs to them that in both their attempts to stop Bloodwork that he said something which Barry had said to them once before. This suggests to them that Barry is still alive inside Bloodwork and is fighting back against his control.

As Bloodwork and The Flash arrive outside STAR Labs, The Flash tells Cisco to let the light in.

Cisco thinks that Barry's plan is to use Allegra's light powers to create a focused UV blast through the particle accelerator that will spread the cure for Bloodwork's condition instead of the conditon itself.

Barry's plan works and cleanses everyone except Bloodwork, who changes into a giant hulking monster for a bit while fighting The Flash.

Nash Wells is saved from the Blood Brothers when the UV wave washes over him - a miracle he attributes to The Monitor.

The Flash contains Bloodwork in the MAC.

ARGUS picks up Bloodwork. As far as Cisco can determine his condition is permanent and, worse yet, his cancer has returned.

Frost hands control of their body over to Caitlin for the duration of Crisis.

Barry tries to return the watch Joe gave him. Joe refuses to take it just yet.

The team join together and discuss the past as they wait for Crisis to begin.

Cecile makes reference to HR Wells telling her that Barry's real superpower was that he never gave up hope.

Iris reveals that she had Cisco vibe her to the moment of her and Barry's first kiss in 115, while he was trapped in the Speed Force between season 3 and season 4, so she could relive it over and over.

The skies turn red and lightning fills the air just after midnight on Tuesday, December 10, 2019.

In the final scene, Nash Wells offers himself to the Monitor and is told he has the knowledge to open the portal. He touches the seven symbols and there is a flash of light which draws him into the portal, which then seals itself again. This same scene was also show at the end of the episodes of Batwoman, Supergirl and Arrow which aired during this week.

Cisco and Iris once again have to learn the lesson about working together in order to save the day. Except Barry gives them the plan to save everyone, which makes the whole things sort of pointless.

It's just a coincidence that Nash Wells is trapped in the dark during the Bloodwork attacks and is saved by Allegra's actions, causing him to pledge himself to the Monitor... or whoever that voice was.

A disappointment all around and a definite contender for one of the worst episodes in the show's history, as our regulars are dumbed down to make the story work and too much emphasis is put on supporting characters no one really cares about. Drawn out for far too long, this episode proves that this Bloodwork was never worthy of being a Big Bad, much less a two-part finale. At least we didn't have to spend the whole season dealing with him. Of course probably any villain would have been underwhelming heading into Crisis but Bloodwork's plan was just so stupid to be beyond belief.
Posted by Starman at 1:15 PM