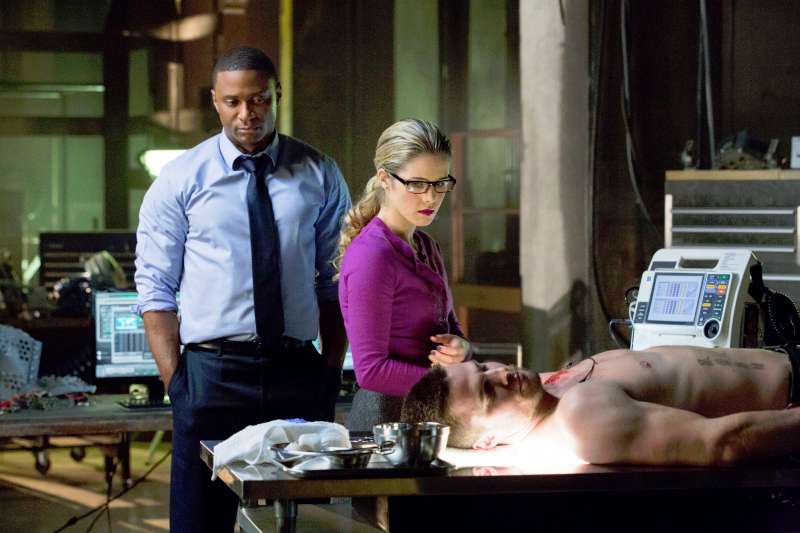 After his confrontation with his mother as The Hood ends with him taking a bullet in the shoulder, Ollie is forced to turn to Felicity Smoak once again - this time for a ride to his hideout.  As Diggle rushes to save a fading Ollie's life, Ollie flashes back to his time on the island and recalls how he began his training under the tutelage of ASIS agent Slade Wilson.

The Odyssey (the password used to confirm the supply plane landing is an Odyssey quote and The Odyssey is a story about a man trying to get home), Green Arrow: Year One (the island sequences), Batman Begins (the training scenes between Slade Wilson and Ollie on the island), the novel version of The Princess Bride (Ollie's dream/nightmare of Laurel as he tries to take his brain away from the pain he's going through), and the film Castaway (Ollie jokes that he's shipwrecked and his only friend is named Wilson).

It's somewhat unlikely that someone who builds their own computers would be able to repair a defibrillator on the fly without the Manic Pixie Drean Girl Magic SCIENCE! that drives 90% of what Felicity Smoak does on this show.

You'd also think that if Ollie was paranoid enough to drain and freeze his own blood in case he needed a transfusion and as well prepared as Diggle is that one of them would have thought to test the defibrillator first and make sure it was in working order.

Slade tells Ollie that the man who tortured him was his partner, despite having already told him this once last episode.  Ollie reacts like this is new news.

Manu Bennett owns this episode.  While you can sympathize with Ollie's annoyance at the smug Aussie bastard who is mocking his every move, you can also appreciate Wilson's desperation as he realizes that his hopes of escape now rest on an idiot man-child like the Ollie of five years ago.  The interplay between Bennet and Stephen Amell is also good - nearly as good as Amell and David Ramsey's rapport.  Hopefully the former will equal the later in time.

The soundtrack for this episode is damn good and perfectly captured the tension of each scene.

This is the first episode where the majorityof the episode involves Ollie's time on The Island.

We learn in this episode that Slade's partner - the man with the matching orange/blue mask who tortured Ollie - is named Billy Wintergreen.  This is a reference to William Wintergreen - Slade Wilson's closest friend and confident in the original Deathstroke comics.  In the comics, Wintergreen acted as a sort of Alfred the Butler analog to Slade, acting alternately as Slade's voice of reason, right-hand and field medic, believing he owed a debt to him after Slade defied orders to save his life.  The Wintergreen we see here has little in common with the comics Wintergreen, who was loyal to Slade until his death.

Wintergreen's identity was revealed several hours before this episode aired, in Issue #19 of the Arrow web comic.

Slade mentions that Wintergreen was the godfather of his son, Joe.  This is a reference to Joseph Wilson - a.k.a. the Teen Titan Jericho and Deathstroke's son.

We learn at the end of this episode that Yao Fei's daughter named is named Shado.  This is likely a reference to the character Shado, created by Mike Grell for his Green Arrow mini-series The Longbow Hunters.  The daughter of a Yakuza agent stationed in the USA during World War 2, Shado was trained as an assassin and master-archer by the Yakuza following her father's failure in his assigned mission and eventual suicide.  She crossed paths with Green Arrow several times, their first encounter coming after she came to Seattle to track down and kill the American soldiers who tortured her parents to learn the location of a hidden Yakuza treasure stash.  Connecting these two characters is odd, since Shado is of Japanese ancestry in the comics and Yao Fei was Chinese.  Perhaps we will find out that Shado's mom in the show is Japanese?

The password used by the supply plane pilot is indeed from the Ancient Greek epic poem The Odyssey - "Of all creatures that breathe and move upon the earth, nothing is bred that is weaker than man."  The Odyssey is an interesting story to parallel with Ollie, as the hero of that story - Odysseus - is also a clever man and a noble by birth, brought low by his excessive pride.  Odysseus spent many years (over 20, compared to Ollie's 5) trying to get home and he spent a good portion of that time shipwrecked.  Odysseus was also desperate to get home to his true love, Penelope, as Ollie is desperate to get back to Laurel.

Some other fitting Odyssey quotes...

"It is a wise child that knows his own father."

"For a friend with an understanding heart is worth no less than a brother." - Ollie/Diggle, in a nutshell.

“There will be killing till the score is paid.” - Ollie's mission, in a nutshell.

Slade: How did you survive here for six months?  I know Girl Scouts who have more fight in them!
Ollie: (laughing) You're fighting Girl Scouts now, Slade?
(Slade hits him in the knee with an escrima stick)
Ollie: AUGH!


(After failing to start a fire by rubbing two sticks together and discovering Slade had a lighter)
Ollie: Seriously?  I've been working on this for two hours!
Slade: I know.  I was watching.  Thank you for the entertainment.

(As Ollie stares at Laurel's picture)
Slade: Don't worry.  She'll be waiting for flowers, when you get back.
Ollie: I doubt it.  Remember how I told you I was shipwrecked here?  Her sister was with me when the boat went down
Slade: That's funny.  I never took you as being the bad boy.  You seem to lack the spine.
Ollie: That's why I've got to get home.  To make this right.
Slade: If you think you can sleep with your girlfriend's sister and still make it right, you're dumber than I thought.  And believe me when I tell you that is saying something.

Diggle's whole speech about why he's helping Ollie with his mission and how it makes him feel like a good person, after spending so much time in Afghanistan killing children to protect a child-selling warlord.

(Upon seeing Ollie, in costume, in the backseat of her car as he unmasks)

Felicity: Everything about you just became so unbelievably clear.
(Ollie gives her a look of disbelief that I'm sure mirrors my own)

The episode picks up right where 113 left off, with The Hood about to question Moira Queen.  Moira is apparently trained in firearms and is able to wound Ollie in the shoulder at point-blank range.  Diggle has had some medical training.  Ollie foresaw the need to stockpile blood, so he has several pints frozen for emergencies stored in the Arrow Cave.  Felicity recalls every time Ollie came to her with a half-baked lie about something to investigate, including a bullet-riddled laptop (103), a black arrow (109) and a company involved in planning armored car robberies (111).  She further takes Diggle to task for his lie about an energy drink/hangover cure (112).  We find out that Yao Fei has agreed to work with Fyers because he is holding someone important to him hostage.  We find out later that it is Yao Fei's daughter, Shado  Fyers takes a call from his employer, who is worried about "The Plan", which apparently requires Yao Fei for some reason.  Felicity replaces Oliver's computers in the Arrow Cave with something more modern and hacks the police computers to erase the blood sample Ollie left behind in his mother's office.


Diggle refers to his time in Afghanistan and how he was assigned to protect a warlord and wound up defending him against armed children.  He describes an attack similar to the one depicted in Issue #4 of the Arrow web comic.

Oh, Felicity.  It's rather hard to believe that while she knew something was up with Ollie and the favors he was asking, she wasn't able to put together the pieces together until he turned up wounded and in costume in her backseat.  Consider how the news talked about a security company she had discovered was planning armored car robberies.... having people involved with said security company die while attempting an armored car robbery!

Granting that Ollie wasn't expecting his own mother to pull a gun on him and that most of the episode depicts him at a time when he was (forgive the pun) green, a lot of this episode is devoted toward showcasing Ollie's screwing up.  Even while unconscious, Felicity and Diggle feel the need to run down all of the stupid lies Ollie told her in the past.

A solid episode that accomplishes a lot in terms of story, with the flashback scenes gaining a broader focus as we get our first glimpse of the power behind Eddie Fyers, Yao Fei's motivations and Slade Wilson's background.  There's not as much forward movement in the modern-day storyline, save that we'll never have to watch another awkward scene of Ollie trying - and failing - to give Felicity Smoak a plausible reason for doing whatever SCIENCE! stuff he needs done.  That fact alone makes this episode a good one.
Posted by Starman at 1:05 AM