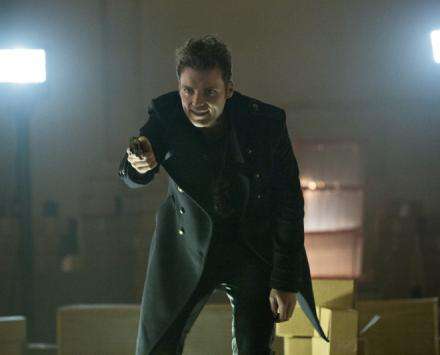 With Thea's plea-bargain on charges of drug possession and driving under the influence rejected, Ollie starts perusing every avenue he can to help his sister.  As The Hood, he hits the streets seeking all the information he can find regarding the designer drug Vertigo and who created it.  As Oliver Queen - Loving Brother, he turns to Laurel to seek help influencing her father to influence the judge determined to make an example of Mia to all the other Vertigo users.  And as Oliver Queen - Captain in the Russian Mafia, he uses his connections and money to arrange a meeting with the man who makes Vertigo - a dealer who goes by the unlikely alias of The Count.  Can Ollie keep his head as events spiral out of control?


In the island flashbacks, Ollie is forced to participate in the regular combats the prison guards orchestrate between themselves and the inmates.  Seemingly killed by the treacherous Yao Fei, Ollie is truly rendered unconscious and his body left to drift down-river.  Ollie awakens out of sight of Fyers and his men, finding new direction in a map left on his body by Yao Fei.

Green Arrow: Year One (the island sequences), Green Lantern/Green Arrow #75-76 (a.k.a. the infamous "My Ward Is A Junkie?!" storyline)

The dramatic "cliffhanger" of a seemingly dead Ollie being rolled off a cliff by Yao Fei is somewhat flat given that we know Ollie is alive and well five years later.

Why does Ollie take his Vertigo sample to Felicity Smoak?  Since when does IT handle chemical analysis?

The after-effects of Vertigo leave Ollie unable to use a bow accurately yet he's somehow able to throw knives and darts accurately during his assault on The Count's lab.

Count Werner Vertigo first appeared in World's Finest Comics #251 (July 1978).  Originally a Black Canary villain (she faced him alone in his first appearance), Count Vertigo was the main villain of the 1983 Green Arrow mini-series and was a frequent foe of both heroes afterward.  Unlike the character we see in this episode, he did possess a royal title and was hereditary ruler of the small Eastern European nation of Vlatava.

In the comics, The Count suffered from a hereditary inner-ear condition that affected his balance and eventually deafened him.  He was able to correct the imbalance with a special earpiece and discovered that by tinkering with the ear-piece that he could temporarily infect others with his condition.  It was later suggested in the pages of JSA that Vertigo's condition might be a variation of Ménière's disease - a real-world condition which does cause intense vertigo and hearing loss in those who have it.

Count Vertigo's portrayal over the years has gone all over the map, with him alternatively giving up his grudges against Green Arrow and Black Canary to try and reform (often as part of the Suicide Squad or Checkmate) or joining various incarnations of the Injustice Gang or other villain groups.  This may be a result of his bipolar disorder, which was also revealed in the pages of Suicide Squad.

The Vertigo drug shares the same black and green coloring as Count Vertigo's costume in the comics.

While McKenna Hall is an original character, the last name Hall is a common one among DC Comics heroes.  Of particular note is Carter Hall a.k.a. Hawkman, who had an antagonistic relationship with Green Arrow when both were members of the Justice League.  Also of note are Carter's son Hector Hall (a.k.a. The Silver Scarab, The Sandman and Dr. Fate) and brothers Don Hall and Hank Hall a.k.a. Hawk and Dove.

The name Anatoly Knyazev is dropped at one point as someone who in the Russian Mafia who was very impressed with Oliver Queen.  In the comics, Anatoly Knyazev is the secret identity of KGBeast - a Cold War era assassin from the Batman comics, who became a mercenary after the collapse of the USSR.

When injected directly into the bloodstream, Vertigo affects the Thalamus region of the brain.  The Count says this is where all the information from your pain receptors is collected (Technically true - although the Thalamus actually regulates all the sensory and motor signals - not just pain).

Dealer: C'mon, man!  I'm just trying to make an honest living!
The Hood: There's nothing honest about what you do.

The whole scene with Quintin and Laurel discussing Thea Queen and how she's just like Sara Lance was before her death.

(As they're exiting the meeting with the Russian mob, Ollie carrying a seemingly dead body over one shoulder)
Diggle: I can't believe you killed that guy.
Ollie: You really have a low opinion of me?
(Ollie opens the trunk of the car, puts the body in it, looks around, and then touches the man's neck once he's convinced they aren't being watched.  The dead man gasps suddenly and tries to sit up.)
Diggle: Woah!  That's a neat trick.  Are you going to teach me that one day?
(Ollie punches the man, knocking him out again)
Ollie: No.

Diggle: (deadpan) Fantastic.  I'm looking forward to my new and exciting career as a drug dealer.

(As Ollie is waking up after being dosed with Vertigo)
Diggle: Morning.  How you feeling?
Ollie: I feel like I'm getting the worse hangover of my life.
Diggle: And that coming from a guy who spent most of his twenties in a hangover, that's really saying something.

The scene where Moira and Thea finally reconcile.

Seth Gabel tries way too hard to channel the spirit of Heath Ledger as The Joker and fails miserably at conveying the same sense of madness or menace.

(After giving Felicity Smoak the lamest excuse ever for why they need a fluid sample analyzed, David Ramsey and Stephen Amell deliver their own commentary on the script for tonight's episode)
Diggle: Your BS stories are getting worse.
Ollie: I'm well aware.

Oliver used to date McKenna Hall back in his wild days.  The two got kicked out of a club after McKenna stripped in public.  She now works as a police officer in the SCPD vice squad.  She's part of a joint task force along with Detective Lance investigating The Count.  She gives Oliver a copy of all the information the police have on The Count.  Sara Lance shoplifted at some point in the past but her father was able to use his pull in the SCPD to make the charges disappear.  Ollie contacts his man in the local Russian Mafia, Alexi Leonov - last seen in 103.  He recognizes Ollie now and requires that he kill an underling to prove his loyalty.  Ollie using a paralyzing touch to render the underling seemingly dead - a trick he apparently learned from Yao Fei on the island, as we see Fei use the same trick to fake Ollie's death in a flashback later in the episode.  Later, Ollie revives the man while pretending to dispose of the body and asks Diggle to arrange a new identity for him.  Ollie tells Thea what Moira told him of their father's cheating on her, which we first heard in 111.  Moira overhears Ollie doing this and is less than amused.  Ollie uses the police file on The Count as a token of good faith to arrange a meeting.  56 people died in the creation of Vertigo.  Ollie is given a half-dose of Vertigo as The Count makes his escape.  Diggle tries to neutralize it using the same antidote flower Ollie used on him in 103 - apparently Ollie trained him in how to do so sometime between that episode and this one.  Ollie survives, but wakes up feeling like he had the worst hangover of his life and continues to experience nausea whenever he looks down from a great height.  He's unable to shoot straight with a bow but decides to go after The Count anyway, relying on his martial arts skills.  Oliver confesses to Detective Lance and Detective Hall that he faked the drug deal with the Russian Mob to try and lure The Count out into the open.  Detective Lance tells him that if he interferes in police business again he will put him behind bars.  McKenna Hall apologizes for placing Ollie at the scene but Ollie says she was only doing her job.  Ollie turns to Felicity Smoak to analyze Vertigo and figure out where the water used to make it came from.  The Hood barely beats the SCPD to the lab, injecting The Count full of Vertigo just before Detective Lance arrives.  Detective Lance refers to what he said about The Hood just being a killer, not a hero, in 104.  Thea accepts a plea bargain deal for two years Probation and 500 hours of community service at Laurel's law firm.  The Count is left a gibbering wreck by Ollie's injection and the doctor treating him says she's never seen anyone survive that high a dosage of Vertigo, saying they have no idea what effects that much of the drug may have on him.  Felicity Smoak meets Oliver at The Big Belly Burger and shows him the copy of The List that Walter Steele gave to her in 108.  Oliver denies having knowledge of The List.  Felicity tells him that she got the book from Walter Steele before he disappeared, that it belonged to Moira Queen and that Walter found it in their house.

In the flashbacks, we see Deathstroke again, taking part in the fights organized by the guards.  Ollie is forced to fight Yao Fei, who seemingly kills him before pushing his body off a waterfall.  In truth, he used a paralyzing touch to put Ollie under and revived him just before pushing him over.  Yao Fei also planted a copy of a map on Ollie, seemingly pointing the way to another sanctuary.

McKenna Hall doesn't come off as a particularly competent police officer, what with her giving copies of police documents to billionaire playboys with suspect pasts.  Even if she DOES tell him to leave the policing to the police.  Then again, she does use a rubber glove to pick up the needles dropped by The Hood as the police storm The Count's lab...

Granting that Ollie is stoned out of his gourd, you'd think that Diggle would have suggested they think of a more plausible excuse than the BS story about an energy drink before going to Felicity Smoak to ask for a fluid analysis.  At the very least, you'd think he'd realize that handing her a hypodermic full of a mystery substance might be a bad idea.

A mixed bag, overall.  The ensemble cast does the best with what they have but there's too much plot weighing down the story to allow it to keep moving.  Seth Gabel as The Count is the biggest problem, hamming it up in a way that doesn't fit the more realistic tone of this show.  A lesser problem is Janina Gavankar as Detective McKenna Hall, who doesn't really get to do much or showcase much personality.  Really, there's nothing here that feels all that gripping or necessary until the final scene and even the revelation that Moira may have been lying to Ollie all this time falls flat.
Posted by Starman at 12:09 AM