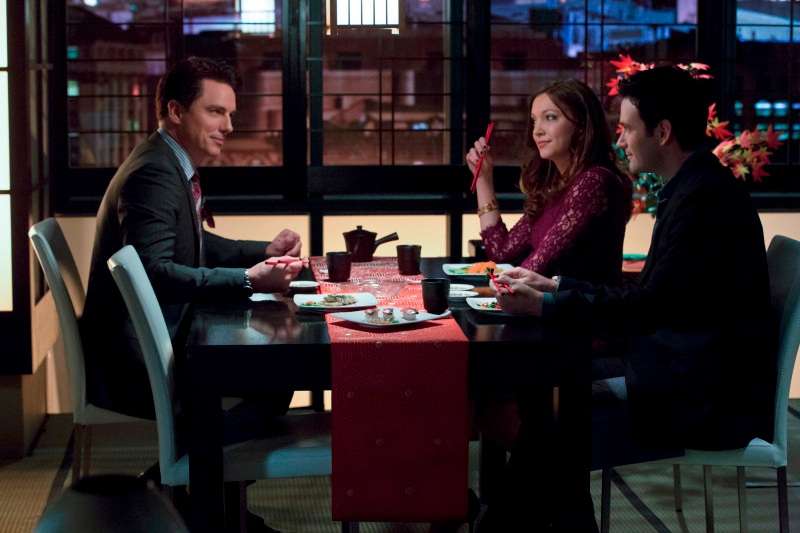 A string of armored-car robberies in Starling City gets Oliver Queen's attention.  Quickly figuring out that the robbers are using military raid tactics and military-grade weaponry, Ollie follows the trail to Ted Gaynor - head of a local securities company, whose name is on The List.  John Diggle is familiar with Gaynor, who was his ex-CO and who offered him a job before Digg was hired by the Queen family.  Diggle is convinced his CO couldn't have anything to do with the robberies but Ollie can't believe his name wouldn't be on The List if things he were completely honest.

Malcolm Merlyn calls his son Tommy, claiming he wants to reconcile after going a bit far with his "tough love" tactics.  A dinner between the two with Laurel Lance goes well enough... into Malcolm tries to push Tommy into agreeing to close down a free medical clinic his mother once owned/worked at.

Back in the Queen home, Oliver and Thea both think that Moira is acting oddly.  Thea has noticed something is up between Moira and Malcolm but incorrectly guesses they are having an affair.  This pushes Thea over the edge at her 18th birthday party, where she samples a gift from her friends - a new designer drug called "Vertigo".  This leads to her joy-riding in her present (a new convertible), being hospitalized and - eventually - being arrested for Driving Under the Influence.

In the Island flashbacks, Ollie tries to infiltrate Eddie Fyers' army in order to rescue his savior.  He is quickly discovered, imprisoned and learns that the man he trusted and was risking his life to rescue has apparently been working with Fyers the whole time!

Green Arrow: Year One (the island sequences), Green Lantern/Green Arrow #75-76 (a.k.a. the infamous "My Ward Is A Junkie?!" storyline),  the Michael Bay film The Rock (disenfranchised soldiers turn criminal) and a recurring theme of trust misplaced throughout each of our little scenes.

Honestly, the whole cast is firing on all cylinders this week.  Would that we had gotten this episode last week when the show returned from the holiday break.  To single out my top five, in no particular order...

Ben Browder gives an excellent turn as this week's special guest villain Ted Gaynor.  Most recently seen in the Doctor Who episode A Town Called Mercy, Browder has a certain indefinable gravitas as an actor that makes his turn here the greatest of the one-shot villains we've seen so far.  Shame we won't be seeing more of him.

Long regulated to comic-relief duties, Colin Donnell gets to add some much needed depth to the character of Tommy Merlyn.  We learn a bit more of his past, including the violent death of his mother and how that seemed to close his father off to him.  His coolness in talking about this as well as his father's continual betrayal of his trust stands in stark contrast to the playful persona we've largely associated with Tommy so far and it is a credit to Donnell's skill as an actor that this change seems totally natural.

John Barrowman, as Malcolm Merlyn, doesn't appear for long in this episode and it's no surprise to anyone he plays the charming jerk as well as ever.  He also gets one brilliant moment of silent acting as we see him looking at a picture of himself, his wife and his young son with regret as he stands in the hideaway where he keeps his Dark Archer gear.

David Ramsey - who I feared might become sanctimonious as John Diggle - is finally allowed to be wrong about something while still saving face.  I must confess I feared we were getting into Magical Negro territory given how often Diggle has been right about Ollie lying to his family being bad, Ollie needing to spend more time with his family and less time fighting crime, Ollie being stupid to get involved with Helena Bertinelli and Ollie being wrong to spend time with his family when he should be out fighting crime.  Ramsey does a fine job portraying Diggle as the tough man of principle who won't back down in his beliefs and is man enough to apologize when it turns out he was wrong.... even if he was wrong for all the right reasons.

Willa Holland has stolen several episodes as Thea Queen and this episode is no exception.  It is a tricky thing to play a character who can be wise in so many ways and yet so foolish in others.  The only other actor I can think of who manages this trick on a regular basis is Matt Smith as The Doctor.  While Thea is wise enough and people-savvy enough to know that something is going on between her mom and Malcolm Merlyn, she isn't experienced enough to realize that sometimes the most logical explanation (i.e. affair) is not always the correct one.  Her immaturity also comes through in her response to her mother apparently betraying her trust and her father's memory - i.e. taking drugs then going for a joyride.

The action sequences with the armored car robberies are incredibly well-shot and well-paced.

The Blackhawk Squad Protection Group is a reference to the comic Blackhawk - a military comic series first published by DC Comics in 1941. The series focused upon an elite international team of pilots collectively known as The Blackhawk Squadron. Their leader was an American of Polish heritage name Bart Hawk, who also went by the codename Blackhawk.

Ted Gaynor was also a character in the Blackhawk comics published during the 1980s. There, he was a Lieutenant in the United States Marine Corps who was appointed to the squad at a time when they were one man short. He proved to be an ill-fit for the team, being far too militaristic and blood-thirsty and he was quickly dismissed. He would later team-up with the villain King Shark in a bid to get revenge on the team and died in single combat with Bart Hawk himself.

Malcolm Merlyn makes reference to a colleague of Moira Queen's named Carl Ballard, who is attempting to gentrify The Glades.  Carl Ballard is also the name of the first criminal fought by the Silver Age Atom in Showcase No. 34 (1961).

One of the names we see on the same page of The List as Ted Gaynor is Samuel Rosenberg.  This is also the name of the author of Naked Is The Best Disguise - a book which proposed a formula of sorts that could be applied to the narrative structure of every Sherlock Holmes story.  Curiously, the same formula seems to fit the story of this episode...

Another name we see on the same page of The List as Ted Gaynor is Gregory Davenport.  This is also the name of the author of a well-regarded manual on Wilderness Survival.  Perhaps the book was used as reference during the island sequences and the name being on The List was a tip of the hat?

(Regarding his father's dinner invitation)
Tommy: Apparently he wants to mend some fences but... thanks to him I can't afford a fence, so I can only assume he's got some other agenda.
Laurel: Well, there's only one way to find out.  Maybe he really is trying to extend an olive branch?
Tommy: You really do look for the best in people, don't you?
Laurel: Lucky for you.

(After Gaynor threatens Carly's life)
Diggle: You're forgetting one thing, guys.
Gaynor: Oh yeah?  What's that?
Digg: I'm the one with the grenade launcher!

(After Ollie shoots Gaynor dead, saving Diggle's life)
Diggle: You're late.
Ollie: You knew I was coming?
Diggle: Next time you plant a bug on someone, be a little more subtle about it. (beat) I wish you trusted me though.
Ollie: I trusted you.  But them?  Never.

Diggle: I screwed up, Oliver.  Obviously, Gaynor wasn't who I thought he was.  I was wrong.
Ollie: Yeah, but... you were right too.  When you told me that I trusted the list more than I trusted you?  Diggle, the truth is that after what happened to me on the island... it's difficult for me to trust anything.  But you do.  And that reminded me why I chose you as my partner.  It's because you see the best in people.

Emily Bett Rickards's delivery of the line "So no wine then?" is painfully flat.  There's no pause or inflection at all.

Thea notices that Moira seems far too well-adjusted in the face of Walter Steel's disappearance.  Diggle calls Ollie's hideout "The Arrowcave" for the first time.  The robbery we see is the third one perpetuated by the armored-car robbers.  Diggle says it has been two months since they found out Robert Queen didn't write The List (109)  Ollie uses knock-out darts to bring down the soldiers in the Blackhawk offices.  Ollie explains that he found a message his dad left him explaining The List " a few years ago".  He did not find it on the island.  Tommy Meryln's mother was killed when he was 8.  She apparently ran a free clinic, which Tommy still has legal control over.  Ollie's skill with a bow is such he can shoot the gas-mask off of someone, by putting an arrow through the filter.  Thea Queen is now 18.  One of her friend's birthday present is a dose of a new designer drug called Vertigo.  After his wife died, Malcolm Merlyn shut his son out and disappeared for two years - the implication in the video as Tommy talks about this being that this was when Malcolm first began his training as the Dark Archer.  Ollie allows Diggle to cross Ted Gaynor's name off of The List at which point Diggle says he doesn't want to know any names on The List until Ollie tells him who they are.  Thea Queen is arrested for DUI at episode's end.  Vertigo is apparently well-known enough as a designer drug that Ollie has heard of it and it's apparently big in The Glades.

Laurel doesn't get much to do in this episode apart from be supportive of Tommy as he deals with his daddy issues.

Again, Ollie's apparent technical skills are lowered so that we can bring in the Manic Pixie Dreamgirl Hacker that is Felicity Smoak to explain it all.  Granting that the military-grade encryption used by Blackhawk is probably a bit more difficult than the police department computer hacking we saw Ollie doing in Year's End (109), Ollie is still a flipping idiot to keep going back to the same employee and having her do all these things.  Are there no other IT people at Queen Industries?

Delightful.  A solid episode with a good script and good performances from the entire ensemble.  The theme of trust betrayed neatly works its' way into every single relationship in the story and the actors play all the conflicts to the hilt.  The action sequences are also top-notch.  Apart from my usual complaints about the character of Felicity Smoak (am I alone in finding her incredibly annoying?), I have nothing bad to say about this episode.