Knights of the Dinner Table is a comic I've picked up monthly without fail for over a decade now.  Despite this, it's not a comic I review all that often.  There's more than a few reasons for that.  Chief among them are that it's now more of a magazine than a comic book, with over half its' pages now devoted toward articles on game reviews, gamer war-stories and content for publisher Kenzer and Company's own RPG releases.  I also can't really critique the artwork, most of which is copy-pasted from the original character sketches by writer/artist Jolly Blackburn's original comics nearly 20 years ago. 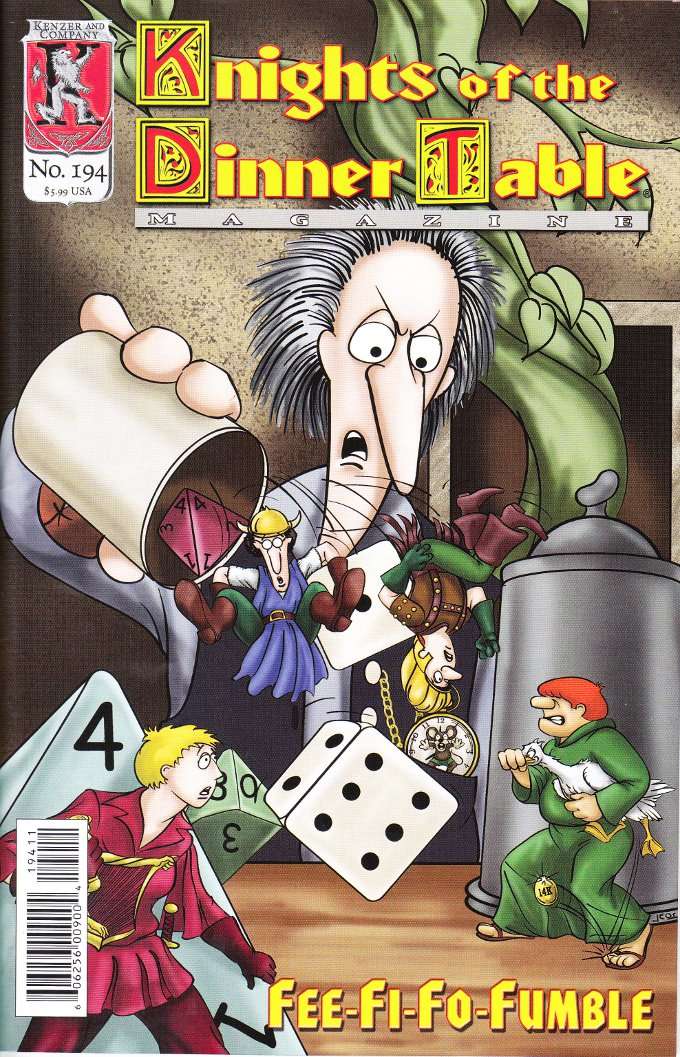 Another issue is that the humor of the comics in KODT is aimed at a niche market that doesn't include the greater number of comic-book readers.  Unless you're an old-school pen-and-paper gamer, much of the humor will likely be lost on you.  That is not to say that there isn't some comedy based on the character's personalities.  Indeed, KODT has a huge cast and the brunt of the humor now comes from the conflict between warring factions and personalities.  Even with the helpful Stan Lee style footnote boxes at the bottom of some pages, it is hard for a new reader to pick up the newest issue and understand immediately about what is going on and who hates who and why.

Case in point.  As this issue opens, the cast is newly returned from a big gaming convention.  Brian, one of the titular Knights, has been thrown off his game and finds himself unable to focus on anything gaming related after seemingly having been given a  set of cursed dice by gamer goddess Felicia Day.  In truth, the dice were sent to him by Shelia - girlfriend of Bob, one of Brian's gaming group, who has longed nursed a grudge against Brian for several reasons, including nearly getting Bob killed by a semi-feral dice-hording cat.  The rest of the Knights know about Shelia's trick but all of them - even those not sworn to secrecy by Shelia - are reluctant to break the bad news to Brian. 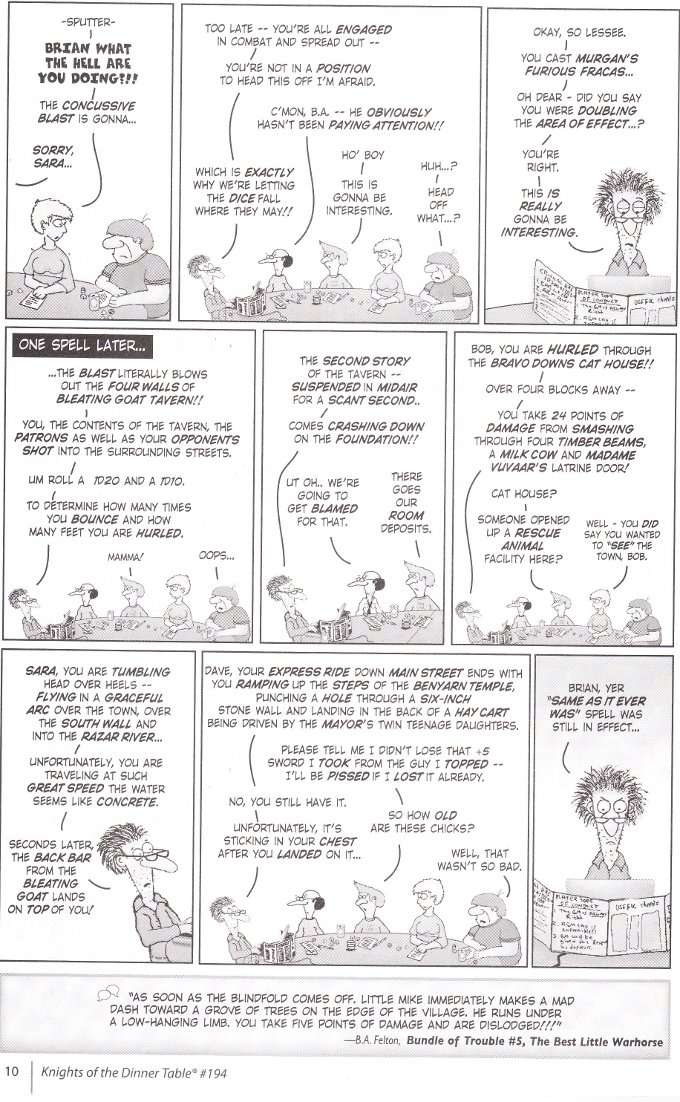 At the same time, local game shop owner Weird Pete has announced a Liberation Day sale at his store, in honor of his recent victory over Brian in a World War Two board game the two have been running for years. This crosses-0over with Bob's conflict between his oldest friend and girlfriend (Bob works Pete's store) and brings us an update on Crutch. Crutch, a local biker/petty thug who got into gaming while in prison, recently decided to start game-mastering his own crew but has proven unable to get a team together. And then there's the on-going story of Pete's gaming group, The Black Hands, and their attempts to take over the kingdom their characters live in through running a farm that is becoming more and more of a forced labor camp/militia.

And that's just the story lines covered in THIS issue!

Knights of the Dinner Table used to be a fun comic full of simple jokes but it has grown heavy under the weight of its' own expanded universe.  It's a fine thing for those of us who have been reading since the beginning (or, at least, somewhat closer to the beginning) but that same rich universe makes this book largely inaccessible to new readers.  I can't recommend this issue whole-heartedly but I will suggest that comedy fans look into acquiring one of the KODT Bundles of Trouble or Tales From The Vault collections that either collect the smaller strip collections or self-contained story-lines.  You can also check out Kenzer And Company's collection of free web-strips.
Posted by Starman at 1:53 PM