Subtitled 'Sins Of The Father', Arrow #16 is a step backward in several respects.  Much of Ollie's character development in recent issues and episodes of the show seems to have been lost, as Ollie is back to killing minions willy-nilly.  It's a minor point but a caption box noting this story took place early on in Ollie's vigilante days would not have been amiss. 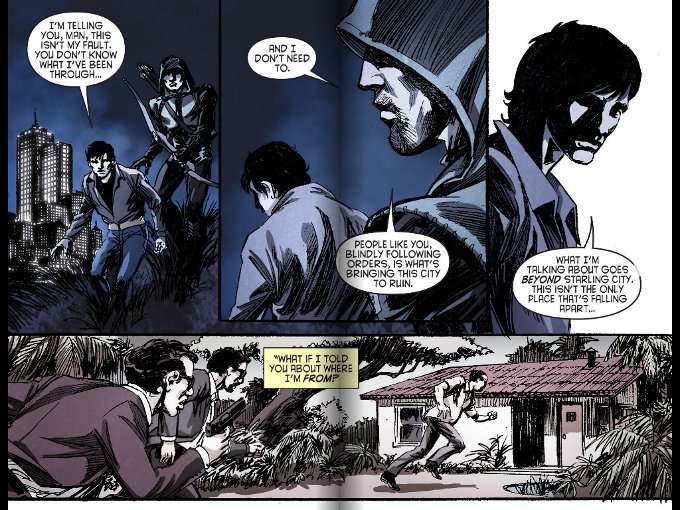 The script by Emilio Aldrich is somewhat repetitive, covering much the same territory as the television episode Legacies.  Like that episode, the main plot of this issue centers upon a family of criminals and Ollie's attempts to help one of them make amends for his past crimes.  The circumstances are just different enough to maintain interest but one can't shake the feeling that we've seen this before. 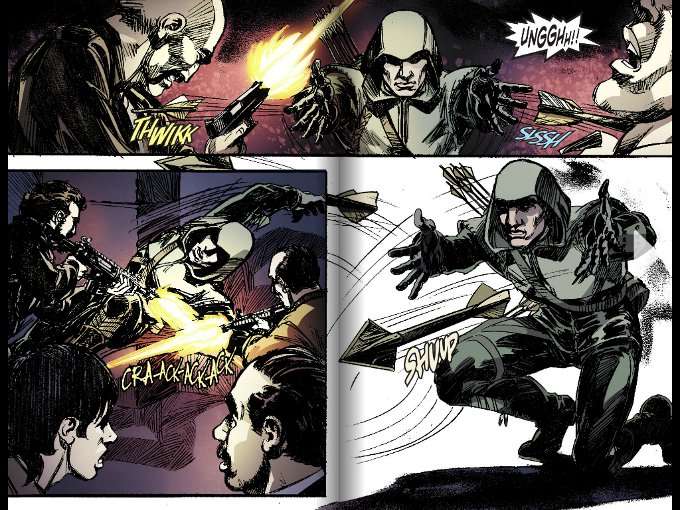 The real unpleasant surprise of the issue is the artwork by the usually excellent Mike Grell.  For the most part, this issue looks good.  The problem is one ridiculous action sequence, where Ollie seems to escape capture by throwing arrows with enough force to cut into the flesh of the drug dealers he is fighting.

I could believe Ollie managing this with darts and we've seen him use those in the show before.  I could see him having arrow-shaped darts just for the sake of keeping to his theme.  But as drawn, given the proportions of everything else, it looks like Ollie is THROWING arrows at people!  For shame, Mike Grell!

As much as it pains me to say this, you can probably skip this week's Arrow comic unless you're a Mike Grell completist or a die-hard Arrowhead.  The story is lackluster.  The art, while generally excellent, falls apart along with all sense of proportion in the final action sequence.  Truly disappointing on all fronts.
Posted by Starman at 8:59 AM