Supergirl, Vol. 1: Last Daughter of Krypton - A No Flying No Tights Review 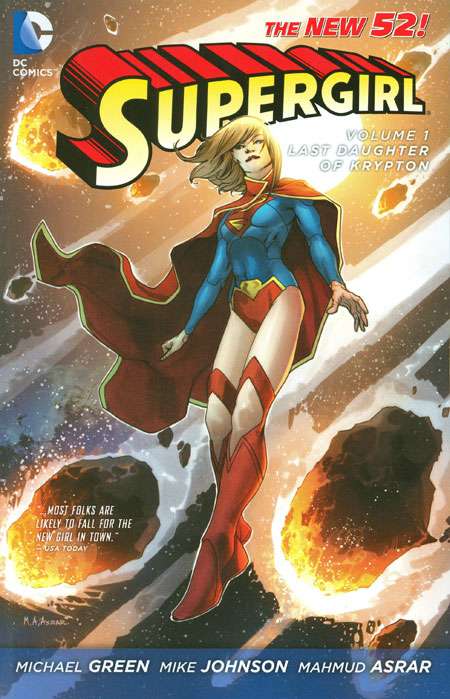 The greatest problem with Supergirl as a character has always been establishing her as a separate entity from Superman and developing her into something more than “Superman’s cousin”. This proved a daunting task for most writers, given the impetus behind Kara Zor-El’s creation was a desire to get more girls to read comics. For the longest time, that’s all Supergirl was – a girl with Superman’s powers. Over the years, many writers have tried to differentiate Supergirl from Superman by giving her different powers and a different background, to varying degrees of success.

Thankfully, the New 52 revamp of 2011 gave DC Comics a chance to create a Supergirl that was free of all this baggage and authors Michael Green and Mike Johnson rose to the occasion. Though the background of this Supergirl may be familiar to long-time comic fans, Green & Johnson’s Supergirl is an entirely new character. They accomplish this through an angle I don’t think any writer has considered in the five decades since Supergirl’s creation – culture shock.

Attacked by Russian soldiers shortly after her awakening from suspended animation after her ship crashes in the Siberian wilderness, this Kara Zor-El is quickly established as both an intelligent, logical young woman and a typical teenage girl. Her intelligence is established in how she deduces that she is truly on an alien world and not just dreaming. Her nature as a realistic teenager is established later on, when she finally meets her cousin Kal-El. Or rather, a man dressed in the seal of their house who claims to be her infant cousin Kal-El, grown to maturity while she was asleep.

This is a brilliant conceit and it makes Kara all the more realistic and, oddly, more sympathetic as a character. After all, how many teenagers do you know who would cope at all well with having to move just before the start of their senior year? How would you have coped with that? Now throw in the “everyone you know is dead” and “everyone here hates you and wants you dead” angles and you’ve got the recipe for some high drama, even ignoring the other superheroic elements of the story as Kara finds her footing, copes with her loss and – eventually – finds her own path to heroism.

Artist Mahmud Asrar deserves an award for his work on this book. Not only does he present the action well, with the story following naturally from panel to panel, he avoids the trap so many previous Supergirl artists have fallen into by indulging in fan service. There’s nary a cheesecake pose to be found and Asrar’s Supergirl looks like a real teenage girl who hasn’t quite finished growing into her figure yet.

All in all, Supergirl is one of the best hidden treasures of the New 52 line. I consider it a must-read for anyone who enjoys quality comics and stories with a strong female protagonist. Furthermore, I’d consider it a worthy purchase for any library with a graphic novel collection aimed at young adults.