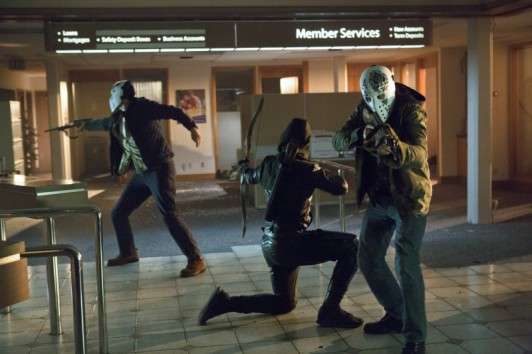 A gang of masked bank robbers dubbed The Royal Flush Gang begin raiding banks in Star City.  Diggle thinks The Hood should take a hand in catching them but Ollie, obsessed with the mission his father gave him to bring the people on The List to justice, disagrees at first.  His investigation into the identity of the gang leads him to a family that his father was directly responsible for harming.

As Ollie struggles with the parameters of his mission, he also struggles with his relationship with his mother, who is growing ever more frustrated with his ditching her at various social obligations for his "business meetings".  Laurel Lance faces a struggle of her own as her legal clinic loses its' largest donor.  Luckily a handsome billionaire playboy is ready to help her organize a fundraiser and write a few big checks himself... but it isn't Oliver Queen.  It's Tommy Merlyn!

Green Arrow: Year One (the island sequences), Robinson Crusoe (Ollie's learning survival skills), "What Can One Man Do?" (the theme of direct crime-fighting vs. working toward fighting corrupt organizations) and Halmet (the hero has visions of his father's ghost, instructing him on what to do).

Stephen Amell and David Ramsey work together like a fine oiled machine throughout the episode.  The dialogue between the two sings but their non-verbal business is great too.  Amell's physical reactions as Ollie realizes that a) Diggle lied to get him to the hospital, b) made arrangements - in Ollie's name - to get hero cop Stan Washington moved to a better hospital and c) has a point about using his talents to help people more directly are wonderful.  So are Ramsey's reactions, as Diggle, when he realizes he's won Oliver over with his manipulation and doesn't have to do the speech he had prepared.

Colin Donnell takes Tommy from the level of annoying sidekick and unnecessary Lancer to something entirely new with his performance in this episode.  While having come off as shallow and insincere as Oliver was once and pretends to me, we finally get some look at his hidden depths.  Seemingly without motivation  to help Laurel other than wanting a way inside her pants, he spends most of the episode being the sleazebag we know and... well, tolerate.  And then he is confronted with a drunk, flirtatious Thea Queen... and refuses to entertain the thought of even dancing with her, let alone going to Point B.  And in the scenes that follow, in which he's honestly thoughtful and concerned, we can believe for the first time that he might be a threat to any romance between Oliver and Laurel.

The Royal Flush Gang is a catch-all title that has been used by various criminal gangs in numerous DC Comics properties since their first appearance in Justice League of America #43.  Versions of the gang have been shown in the Old West of the DC Comics Universe as well as in the far future.  The one thing common to all the versions of the gang is the use of playing-card themed imagery in their costumes, though some versions (such as the gang seen in Batman Beyond) were blood relatives.

Ollie mentions the name of his mentor on the island - Yao Fei - for the first time.  This is also the real name of a Chinese superhero from the DC Comics Universe. - Accomplished Perfect Physician - who is a member of the Chinese superhero team The Great Ten.

Diggle mentions that The Royal Flush Gang were first seen in Keystone City.  In the comics, Keystone City was the home town of the original Flash, Jay Garrick and the third Flash, Wally West.

Laurel makes mention of Stagg Industries being the major donator to her legal clinic.  In the comics, Stagg Enterprises is a scientific research and development company run by a man - Simon Stagg - not known for his charitable nature or scrupulous business practices, so it's rather amusing to hear he's the main contributor to Laurel's legal clinic.  Perhaps he's financing CNRI as a means of making sure he has grateful lawyers available to work cheap  the next time one of his employees is accidentally transformed?  Or perhaps his daughter Sapphire is running things now?

Tommy tries to get Laurel to go away with him to Coast City.  In the comics, Coast City is the home town of Hal Jordan a.k.a.Green Lantern.  Specifically, the Green Lantern portrayed by Ryan Reynolds in the live-action Green Lantern movie and (eventually) Oliver Queen's best friend.

Ollie makes use of a listening device to spy on The Royal Flush Gang.  We also find out "The List" was written in invisible ink and Ollie only discovered it after holding his father's book near a fire.

The entire scene where Diggle and Ollie debate the scope of Ollie's mission.  But especially the ending...

Ollie: My father died so that i could live! Live and make a difference by fixing the city that he and the people in this book ruined ruined!  Every name that I cross off this list honors that sacrifice
Diggle: Oliver, there's more than one way to save this city-
Ollie: Not for me!  Crime happens every day in this city every day.   What do you want me to do?  Stop all of it?
Diggle: Sounds like you have a narrow definition of being a hero.
Ollie: I'm not a hero.

(After rushing to the hospital after being told, over the phone, that his latest target attempted suicide.)
Ollie: You sure?  Scott Morgan doesn't seem like the type to try to kill himself.
Diggle: True, but that's the best lie I could come up with on short notice.

Ollie: You lied to me!
Diggle: Hey, you asked me to work with you.  Not for you.  And when you did you said it was because you understood the kind of man I am.  Well Oliver, I'm the kind of man who doesn't walk away when there's a chance to make a difference.  And neither does Stan Washington.
(Ollie starts to walk away)
Diggle: Oliver, I'm not finished talking.  Where are you going?
Ollie: To go make a difference.  Let's catch some bank-robbers!

In fact, damn near every scene between Ollie and Diggle could be here.  Even the scene with Felicity Smoak.

Ollie mentions the name of his mentor - Yao Fei - for the first time.  Ollie is shown to be better at fighting with escrima sticks than Diggle.  The Royal Flush Gang got their start in Keystone City and moved west, robbing 2-3 banks in a number of large cities over the last three years.  CNRI's major donator is Stagg Industries.  Ollie is stealthy enough to sneak into a police building undetected and competent enough a hacker to break into encrypted police files.  Oliver takes his mom to Big Belly Burger at the end of the episode.

In order to justify the inclusion of Felicity Smoak, we have to believe that Oliver Queen - earlier capable of hacking police computers in seconds -can't manage a basic information search on a potential criminal when he already has their name!

A strong episode thematically, with the idea of families in the foreground.  And yet, it is all the elements outside the central theme that make this episode work so well.  For the first time, we have a subplot for which Ollie is largely absent and has no real affect on the story.  More astonishingly, Colin Donnel as Tommy Merlyn justifies his position in the show as something other than comic relief.  There's not an off-note in the whole thing.