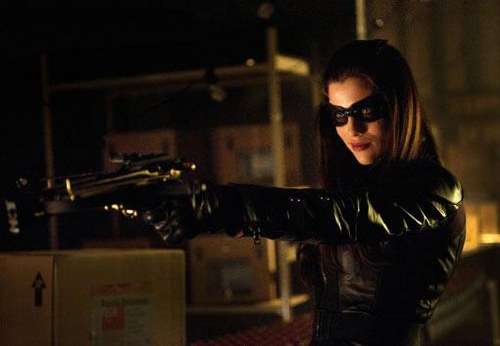 After revealing their true selves in more ways than one, Ollie and Helena share a night of passion..  When the dawn comes, Ollie thinks he's found a potential partner for his war on crime as well as a woman who knows the pain of living a double life.  Helena has other ideas and is resentful of Ollie's belief that his idea of justice is better or different than hers.  Equally resentful is Diggle, who is quick to remind Ollie that Helena is a killer who shoots first and then shoots some more and that her actions have put the city's gangs on the edge of all-out war.  Can Oliver prove them both wrong and teach Helena restraint in her crime-fighting?

At the same time, Walter Steele investigates the mystery of a strange symbol connected to his wife Moira Queen's private affairs and a mysterious notebook with the same symbol hidden in their home.  And Tommy Merlyn continues to adjust to life PTF - Post Trust Fund.

Batman/Huntress: Cry for Blood (Huntress going after members of her own family while pretending to be part of them and Huntress receives training from a male vigilante who hopes to calm her bloodlust and fails).  Justice League: Cry For Justice (every single speech Ollie gives about the difference between Justice and Revenge)


Colin Salmon comes damn close to stealing the whole show.  His cool presence is such that it helps to mitigate the annoyance of not one, not two but THREE whole scenes involving Felicity Smoak being her usual quirky self.  With nothing more than his eyes, Salmon is able to convey the terror in Walter Steele's mind even as he tries to maintain his mask of composure and control as he delves deeper into the mystery of The Tempest company and the secrets his wife has hidden from him.

I also have to single out the other Colin - Colin Donnell - for praise this time. Tommy Merlyn's subplot is the smallest part of the episode but he manages to make it the heart of the story in spite of that.  Both Oliver and Tommy have the same fundamental problem, though for different reasons - they are unable to trust those closest to them.  They both also wind up learning the same lesson - there is no weakness in trusting others.  In Oliver's case, he didn't consider the consequences of trusting too much, too soon.  In Tommy's case, he's afraid of trusting anyone because he fears too much.

The fight scene where Ollie and Helena team up to bring down a drug lab is very well choreographed and shot.

Helena asks if the costume Ollie had in mind for her comes in purple.  The one constant to all of Huntress's costumes throughout the year has been purple being the predominant color.

One of the names we see on The List in this episode is Palmer Cokes. In the comics, this was the real name of an assassin from the Green Arrow/Black Canary comic, who was known as Sniper One.

Ollie: What if I could show you another way?  A way you could take down your father's organization without putting innocent people at risk? Helena: Thank you.  For the coffee.  And the sex.  But I'm not interested.

Ollie: She's lost, Diggle.  And whether she knows it or not, I can save her.  Stop her from doing anything reckless.
Diggle: That's just it.  You can't save her, okay?  Some people don't change!
Ollie: I can help her!
Diggle: Maybe you think you're more persuasive than you are.  Or maybe she thinks she's fine the way she is on her mission of righteous fury.  Whatever it is, either way, all of this - it ends badly.
Ollie: Either way, I've gotta try.
Ollie: Before the island, I wasn't a good person.  I was... selfish and thoughtfless and awful and it affected... really affected people.  People I love.  Cause Helena?  You're on an island too.

Ollie: Millions of dollars worth of illegal drugs confiscated.  A massive blow to your father's criminal proceeds.  And nobody had to die.  Justice.  What do you think?
Helena: I think this feels good.  And not just the justice part.

Ollie: I think you were right.
Diggle: Okay.  About which part?
Ollie: All of it!  I should have listened to you.
Diggle: Oliver, you said you wanted to help her change.  But the thing is she already did change.  When her father killed her fiancee, she changed into something dark and twisted.  You see that now, don't you?
Ollie: It's not that I - it's not that I couldn't see it, Diggle!  I didn't- I didn't want to.  I'm living a double life and to do that I'm taking all of these people that I love.and I'm putting them at arm's length.  I'm giving up a lot.  So maybe - maybe I thought the universe owed me one?  But I looked in her eyes tonight and I can't stop her from going over the edge.  She's - she's already past it.

Ollie: He's going away, Helena.  For the rest of his life.  This is justice.
Helena: Then I guess you were right.  I'm more interested in revenge.  Stay out of my way, Oliver!  Or I'll make sure your secret doesn't stay secret.
Ollie: Helena.... What I did... everything that I've done, I've done because I care about you.
Helena: Too bad I can't stay the same.

Diggle: You know, Oliver, I'm no expert at this but... I don't think love is about changing or saving a person.  I think it's about finding the person who's already the right fit.  One day you will.
Ollie: I think I burned that particular bridge.  Napalmed it, actually.

The whole dinner scene between Ollie, Dinah, Tommy and Helena comes across as incredibly forced.  None of the characters sound like their usual selves and it seems like the scene exists only to push the plot - not to develop the characters.

Every speech that Ollie gives about Justice - even the good ones - can't help but remind me of Cry For Justice and that only makes me sad.

China White, last seen in Muse of Fire, appears again and is possibly shot dead by Oliver during the fight at the Bertinelli mansion.

Thea does not have her own car and wants a convertible

Ollie is a capable enough archer to shoot a tennis ball out of someone's hand.

Oliver provides Helena with her costume and crossbow.

Moira Queen has a copy of The List, same as Robert Queen, written in invisible ink and hidden in the grandfather clock in her room.

By the episode's end, Frank Bertinelli is in jail and Helena has moved on to continue her vendetta.

There's a hint of romance brewing between John Diggle and Karla, his ex-sister-in-law.

Ollie hires Tommy as General Manager for his club.

A mixed bag, this time around.  While Helena is quick to see through Ollie's bullshit and call him out on it, I'm still somewhat bothered that Helena's vigilante identity is pretty much entirely created and facilitated by Ollie...even if she is still favoring guns over the crossbow by episode's end.

A disappointing, seemingly rushed follow-up to Muse Of Fire where the plot moves the characters rather than the other way around.  Ollie claims to be trying to be opening up but acts like more of a manipulative jerk than ever.  Helena's apparently obvious psychosis isn't played off well, until she suddenly storms out on Ollie after being forced into a dinner with "the love of his life".  All in all, I think it might have been more effective to take another episode or two to play with Ollie and Helena as a couple rather than rushing them to their complicated status.  The performances of the cast are perfectly fine but the script leaves them little to work with and Stephen Amnell seems to slowly be turning into William Shatner with all the dramatic pauses he's being given.