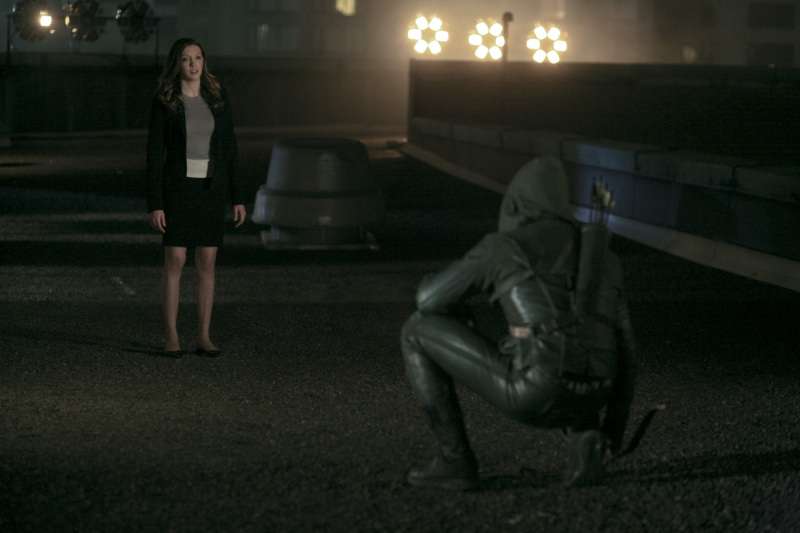 Ollie's attempts to recruit John Diggle after saving his life fall flat, as '"Digg" sees "The Hood" as a criminal and murderer - not a soldier for good.  Fortunately, the new bodyguard hired after Diggle quits is far less competent as far as being able to keep up with Ollie.  Unfortunately, that still leaves Ollie without allies as he starts to investigate a supposedly open-and-shut murder case connected to a corporate whistle-blower and one of the corrupt businessmen on his list.

In order to save an innocent man from Death Row, Ollie will need the help of a good lawyer.  Naturally, he knows one, but can Laurel Lance be convinced that the vigilante her father is hunting is a true force for justice?  Meanwhile, Detective Lance catches a break that could bring him one step closer to catching his "Hood".  And Walter Steele, disturbed by some discrepancies in his company's budget, launches his own investigation into his wife Moira's activities and unearths an amazing discovery.

Green Arrow: Year One (the island sequences), Robinson Crusoe (Ollie's rescue at the hands of a native he can't understand), the Robin Hood legends where Robin earns Little John's loyalty after saving his life, Doctor Who (Diggle's speech at the end about Ollie echos many moments where a character said The Doctor needs companions to keep his moral compass straight), Erin Brockovich (the villain of the week runs a company that is dumping toxic waste illegally) and various other cliche-driven legal thrillers.

It just hit me - why does Oliver get a personal bodyguard and Thea Queen doesn't?  Surely she's at much at risk as Ollie and given her sneaking out and breaking into stores at night, hasn't she proven herself in more need of supervision given her age?

Laurel Lance comes off as a really bad attorney, here.  Ignoring her getting involved with a vigilante who works outside the law in the first place, she threatens a man she's accused of illegal activity in front of a judge after a verdict is handed down against her.

Brodeur Chemicals have to be the most Stupid Evil company this side of Umbrella Corporation.

I. Faced with a whistle-blower threatening to report their toxic-waste dumping, they elect to kill the employee and frame her husband for her murder rather than kill them both and make it look like a random crime.  Why?  Because that's more evil!

II. Granting that trying to lead the police a more likely suspect isn't a stupid idea, it was completely pointless given that the whistle-blower hadn't actually reported anything yet! More, her immediate supervisor had the file containing all the evidence of their wrong-doing and was more than willing to help cover-up her attempts to report the company's crimes.  It would have been far easier and less risky to paint her as a troublemaker than to kill her off!

III. With Peter Declan hours away from execution, even if there were an urgent need to kill him, it would be far easier to just get someone to shank him in the prison showers than to stage a full-scale prison riot.  At the very least, it would be a lot less suspicious!  They don't even have the excuse of needing to kill Laurel, since all her attempts to do anything involving the case failed.  In short, they've already won!  All they need to do is wait a day.  Killing Laurel AND her client right before his execution can only serve to attract the intention they're trying to avoid!

Stephen Amell walks a fine line throughout this episode.  For the first time, we truly get a sense of just how much Oliver has been changed by his time on The Island and how he isn't entirely sane anymore.  It first shows up when he speaks to Diggle about finding clarity and his voice takes on the conviction of a religious fanatic.  We see it again as he loses control taking on the convict who was strangling Laurel.  For all of Oliver's goals and ideals, he is in danger of becoming a monster though he may seek to cure what's deep inside, frightened of the thing that he's become.

Colin Salmon hasn't been given much to do apart from be an imposing authority figure thus far.  Granted, this episode doesn't give him much more to do as Walter Steele, but he manages to make the Felicity Smoak scenes tolerable by reacting to her jabbering with the cool stone-faced disapproval/disbelief that I feel when I encounter quirky comic-relief.

The scenes of Arrow and Laurel on the rooftop are well-designed and laid out cinematically.  The scene on the train-tracks is also well-played dramatically.  It's about the only action sequence that is.  Everything in the prison riot scene is too quickly edited and too closely shot.

Diggle's replacement is named Rob Scott.  Rob may be short for Robin as in Robin Hood or a reference to what Robin Hood did to the rich.  The surname Scott may be a reference to Sir Walter Scott, who wrote Ivanhoe, which did much to establish the modern vision of Robin Hood.

The episode title "An Innocent Man" also belongs to a Billy Joel song, whose lyrics - out of context - bear some resemblance to the events of the episode.

Reference is made to Bludhaven - a New Jersey city in the DC Comics Universe patrolled by the vigilante Nightwing.

The prison Peter Declan is held in is referred to as Iron Heights.  This matches the name of a famously brutal prison for super-powered criminals in the DC Comics Universe.  Curiously, that Iron Heights is located near Keystone City - the hometown of The Flash - and has no previous connection with Green Arrow.

There's no dialogue, but Oliver's riding past his new bodyguard on a motorcycle after sending him to get the car is priceless.

Ollie: I'm giving you the chance - a chance to help other people's families.  Do you remember when the people in this city helped each other?  They can't do that anymore.  Because a group of people - people like my father - they see nothing wrong with raising themselves up by stepping on other people's throats.  It does need to stop.  And if it's not going to be the courts and it's not going to be the cops... then it's going to be me.  And, I hope, you.

Laurel: If what you're doing isn't wrong, then why are you hiding your face with a hood?
Ollie: To protect the ones I care about.
Laurel: That sounds lonely.
Ollie: It can be... but not today.

Ollie: Diggle, I'm not looking for anybody to save me.
Diggle: Maybe not.  But you need someone just the same.  You are fighting a war, Queen.  Except you have no idea what war does to you.  How it scrapes off little pieces of your soul.  And you need someone to remind you of who you are - not this thing you're becoming.

Every scene with Felicity Smoak.  THIS is who Walter Steele chooses to oversee a discrete investigation into possibly stolen funds?

Laurel's "Someone like you." speech.  The cheesy romantic music completely destroys the power of her dialogue.

Paul Blackthorne sounds like he's on Novocaine during the entire scene where Det. Lance confronts Laurel on her working with "The Hood".  In particular, his reading of the line "No, you're breaking the law." rivals this for sheer cheese.

Ollie still has nightmares of The Island that wake him at night.  Ollie uses a device to alter his voice when speaking to Laurel as "The Hood".  Reference is made again to The Glades - the slums of Star City in the comics.  Ollie tells Diggle about his father's suicide and The List as well as why he is doing what he is doing as "The Hood".  John Diggle's brother's name was Andy Diggle and it is confirmed (as hinted by Deadshot's tattoo in the previous episode) that he was killed by curare-laced bullets - the same kind used by Deadshot.  Walter Steele is apparently not a part of the group on The List.  Felicity Smoak, last seen in Lone Gunmen, reappears as the computer techie Walter Steele asks to investigate a discrepancy in his budget.  Ollie uses a dart coated with a knock-out drug.  Iron Heights in a prison located in Starling City.  Walter Steele uncovers the wreckage of The Queen's Gambit in a hidden warehouse.  The password to enter the warehouse is ROBERT.  Det. Lance seems to uncover Ollie's secret identity after checking security footage of his fight with Deadshot and finding an image of Ollie retrieving a garment bag from a garbage can.  The man Ollie meets on the island CAN speak English - he just chose not to. Moira Queen is part of some group made up of all the people on The List and they are aware that Ollie is targeting them rather than just The Rich.  The episode ends with Diggle announcing his intent to join with Ollie and Ollie being arrested by Det. Lance on suspicion of being "The Hood".

Despite being shown to be a capable combatant last week, Laurel is reduced to a damsel in distress for Ollie to rescue during the prison riot.  She also proves to be incapable of recognizing "The Hood" despite finally getting a chance to look him in the eyes for several seconds at close range, saying later that she saw that he had no remose.  You'd think, outraged as she was over him nearly killing the prisoner trying to strangle her, that she'd at least try and deck the guy as he was standing there looking at her.

Ollie actually fares pretty well through most of this episode... right up until it's revealed that he didn't bother to check for security cameras in the building where he stashed his costume and gear in last week's episode while fighting Deadshot.

The first episode of the series to miss more than it hits.  The individual performances are excellent, with Willa Holland and David Ramsey continuing to impress with what little they have to work with.  Armell does a fine job playing up Ollie's madness, both subtle and not and Katie Cassidy holds her own against him.  Sadly, there's only so much they can do with a script where the villains are more mindlessly evil than your average Captain Planet villain and the actors playing the bad guys are similarly hammy .  Even without the presence of the increasingly annoying Felicity Smoak, the Walter Steele subplot would seem flat and lifeless and the surprise ending seems an empty threat.
Posted by Starman at 10:20 PM