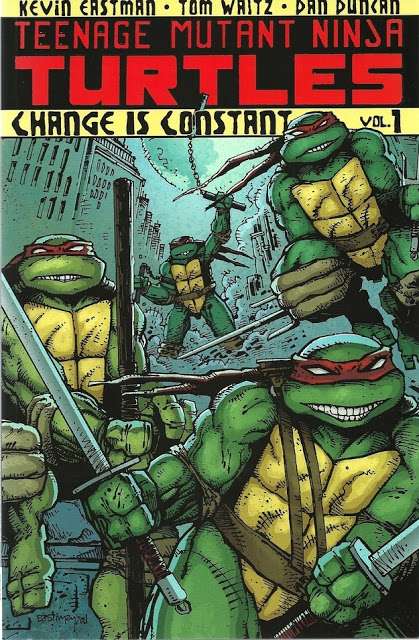 Is there any franchise that has undergone so many adaptations in so short a time as the Teenage Mutant Ninja Turtles? If there is, I am hard pressed to think of it.

First published in 1984 as an outrageous parody of the grim-and-gritty works of Dave Sim and Frank Miller, creators Kevin Eastman and Peter Laird were quick to expand their general concept for the Teenage Mutant Ninja Turtles (hereafter referred to as TMNT) into a series of equally outrageous action figures. This, in turn, led to a number of live-action films, cartoons, video games, and television programs. All of these varying incarnations had their own separate continuities and not all of them were entirely kid-friendly.

This led to a lot of confusion as parents struggled to figure out what TMNT swag was meant for their kids and fans struggled to figure out which stories fit whatever they considered to be “the real Turtles”. Is April O’Neil a reporter in this one? Is Baxter Stockman a white guy who becomes a mutant fly-man or an African-American mad scientist? Was Splinter a pet rat who learned martial arts by watching his owner before evolving into a rat-man or was he a human martial artist who mutated into a half-man/half-rat being?

Thankfully, the new TMNT series by IDW Publishing offers Turtle fans of all stripes a fresh start. Drawing evenly from a variety of prior adaptations, this series offers up plenty of surprises for even the long-time TMNT fans. Additionally, it provides a much-needed jumping-on point for newbies.

The series’ first volume, appropriately subtitled Change Is Constant, quickly establishes all of the series regular characters and the status quo of this reality. Most of the action centers upon the search for Raphael, who was separated from his brothers at the moment of their mutation. We learn the origins of The Turtles and their mentor Splinter as test animals in the labs owned by mad-scientist Baxter Stockman and learn how they were given their Renaissance-themed named by April O’Neil – an arts student working at the lab as an assistant. We also meet Casey Jones, a college athlete turned hockey-mask wearing vigilante whom the lonely Raphael befriends.

Enemies Old, Enemies New – the series’ second volume – opens with our favorite reptile ronin being rewarded with bandanas in their respective favorite colors. We learn of Splinter’s belief that he and The Turtles are the reincarnations of a long-dead ninja clan leader and his four young sons. While the science-minded Donatello is reluctant to accept this, the brothers cannot deny that the mysterious ninja they find stalking the rooftops of New York do seem to resemble the assassins in their master’s stories. And as the Turtles investigate this new menace, the twisted Baxter Stockman unleashes a new breed of remote-controlled robots to hunt down his escaped test subjects.

The third volume – Shadows of the Past – focuses upon the abduction of Splinter and the conflict between two warring factions. On one side stands Stockman and the minions of his benefactor, General Krang. On the other side stands the legendary criminal syndicate known as The Foot Clan and their leader, The Shredder. In order to save their mentor, The Turtles and their friends must walk a twisted trail and face numerous perils before saving the day.

This series benefits from some excellent scripting. Written by Tom Waltz, who also co-plotted these volumes with TMNT co-creator Kevin Eastman, the scripts are well paced and full of an even mix of action, humor and drama. The Turtles are each well-defined characters, largely resembling their incarnations from the original animated series though some of the conflict from the original comics is added in. Donatello and Leonardo, for instance, butt heads constantly as to who is better fit to lead the team.

Dan Duncan’s artwork builds upon Kevin Eastman’s layouts, creating something that looks somewhat like the original comic series but not quite so roughly-hewn. Duncan excels as a visual storyteller and the action is well-paced and well-illustrated throughout. Those who dislike books with a sketchy appearance and limited inks will probably not enjoy Duncan’s art but I feel it captures the essence of the TMNT universe perfectly. Duncan also sneaks in several visual gags, such as a brief flashback where April is seen wearing the infamous yellow jumpsuit.

Ultimately, IDW’s TMNT succeeds as both an introduction to and revitalization of one of the most unusual ideas in comics history and as a bit of nostalgia for those of us who grew up with the original comics and cartoons. I’d rate it as a must-read series, suitable for teenagers – mutant or otherwise.