Two Minute Warning is a welcome return to form after last week's disappointing issue of Arrow.  Our story centers upon Ollie and Tommy taking in a football game.  Naturally things don't go smoothly as Ollie recognizes a star athlete turned criminal acting suspiciously.  Ollie's hunch pays off as it turns out the pro has plans to bomb the stadium and - for added insurance - has the trigger rigged to his pacemaker.  Shooting them all and letting God sort it out is not an option. 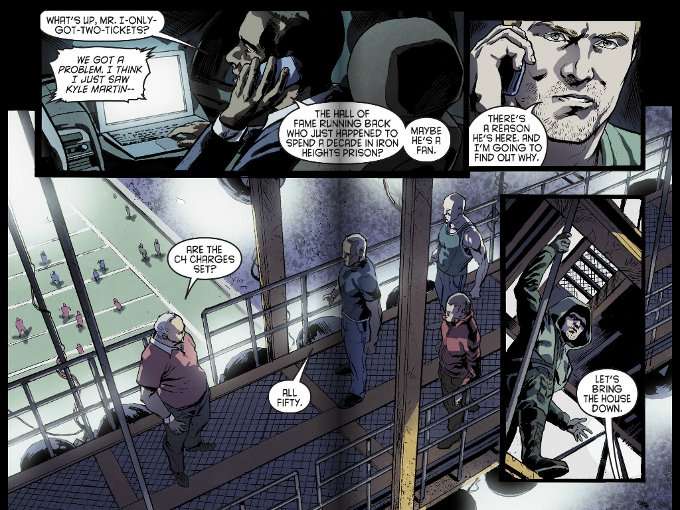 The script by Jake Coburn is action-packed and well-paced.  I particularly enjoyed how he found a way to bring back one of the few trick arrows we've seen Ollie use in the show in a way that makes sense.  There are some contrivances in the script - such as Ollie having brought his Arrow gear with him to a football game and just happening to look back and recognize a football player ex-con acting suspiciously - but none so bad as to strain credibility completely.

The artwork by Xermanico is far better than what we saw from them previously in Arrow #14.  The established cast is well-caricatured as before but the inking issues I noted before have been corrected.  There is still some loss of detail in the middle-ground characters but it's less annoying this time as the focus is on generic mooks rather than our main characters.

Bottom Line: This issue of Arrow is easily worth the one dollar download.  It's not perfect, but it's a solid Green Arrow story.
Posted by Starman at 9:46 AM