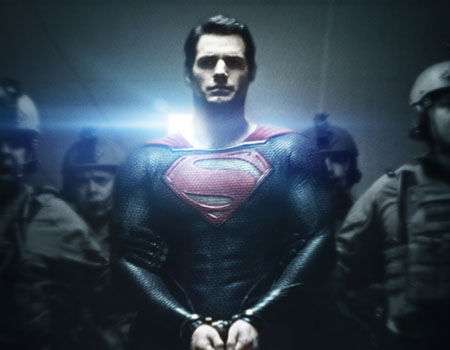 SOURCE: Justice League May Not Fly Unless Man Of Steel Soars, Plus Why David Goyer Compares Superman To E.T.

Despite some fan concern over the first two trailers for Man of Steel (specifically, one trailer that didn't show Superman at all and one trailer which suggested that Pa Kent would tell his son off for saving lives), I've generally had high hopes about the upcoming movie.  That got shot to heck this morning as I read several comments by David S. Goyer - writer of Man of Steel as well as several other superhero movies and comics.

“He’s an alien. You can easily imagine a scenario in which we’d be doing a film like E.T., as opposed to him running around in tights. If the world found out he existed, it would be the biggest thing that ever happened in human history. It falls into that idea of trying to humanize the inhuman. He’s made out of steel, he’s not made out of flesh, metaphorically speaking. We are portraying him as a man, yet he’s not a man.”

I want to trust Goyer.  Having co-written JSA with James Robinson and Geoff Johns, I know he understands superheroes and the inherent hopefulness of the genre.  And the voice-over in the trailer, where Superman talks about his father thinking people would be afraid of him but how he believes differently... that hits the optimistic bullseye that should be the heart of Superman.  But it's still worrying to hear the writer of this movie talking about humanizing the inhuman and Superman not really being a man.

It shows a serious lack of understanding in Superman's character to not think that his humanity is his greatest defining feature.  That despite being an alien by birth, Superman is the epitome of humanism.  As Mark Waid noted in Kingdom Come, Superman's greatest power has always been an " instinctive knowledge of right and wrong... a gift of (his) own humanity."  The minute you take that away - the minute you make The Super more important than The Man, the character ceases to be Superman.

Maybe Goyer was taken somewhat out of context?  Maybe he meant that this movie will look at Superman from that perspective of the outsider being humanized until the world realizes that he is a man like any other at heart?  We can hope so, anyway.