Injustice: Gods Among Us (Web Comic) #5

If you had told me a month ago, that between the Arrow TV show, the new Green Arrow book by Jeff Lemire and the Injustice: Gods Among Us web-comic that the last one would offer me a vision most in-line with what I think Green Arrow should be like, I'd have laughed.  The hell of it is I'm still laughing now.  Because this fun little comic is built around an idea that shouldn't work and yet makes perfect sense in execution - a hint of romance between Green Arrow and Harley Quinn.

I sense that some of you just had your jaws drop and are wondering if your Internet buddy Starman has started drinking again or if he's finally gone off the deep end.  Rest assured, gentle readers, I am as sane as ever.  This book honestly built around that concept and it is that good!

The plot by Tim Taylor is standard stuff but well executed.  Harley Quinn escapes from prison, fearing for her life after hearing the news that Superman has killed The Joker.  Green Arrow takes it upon himself to track her down and take her into protective custody.  Why?  The panel above says it all.  Ollie's not above killing to protect others or himself but Superman squashing Harley in revenge for her minor role in Lois Lane's death doesn't sit right with him.

What comes after this set-up is pure hilarity and sweetness at the same time.  Taylor's dialogue made me forget how much The New 52 has changed the characters of Green Arrow and Harley Quinn and how much I miss the old versions.  At least, I miss aspects of their characters that don't seem to be present in any of the comics I've been reading lately.  I've missed seeing a Harley Quinn with a puckish sense of humor who wasn't a totally co-dependent imbecile.  I've missed seeing a Green Arrow who is a competent man of principle, capable of outwitting a supervillain.  It's astonishing how well these two characters play off each other and how the hint of romance between the two near the end doesn't come off as forced. 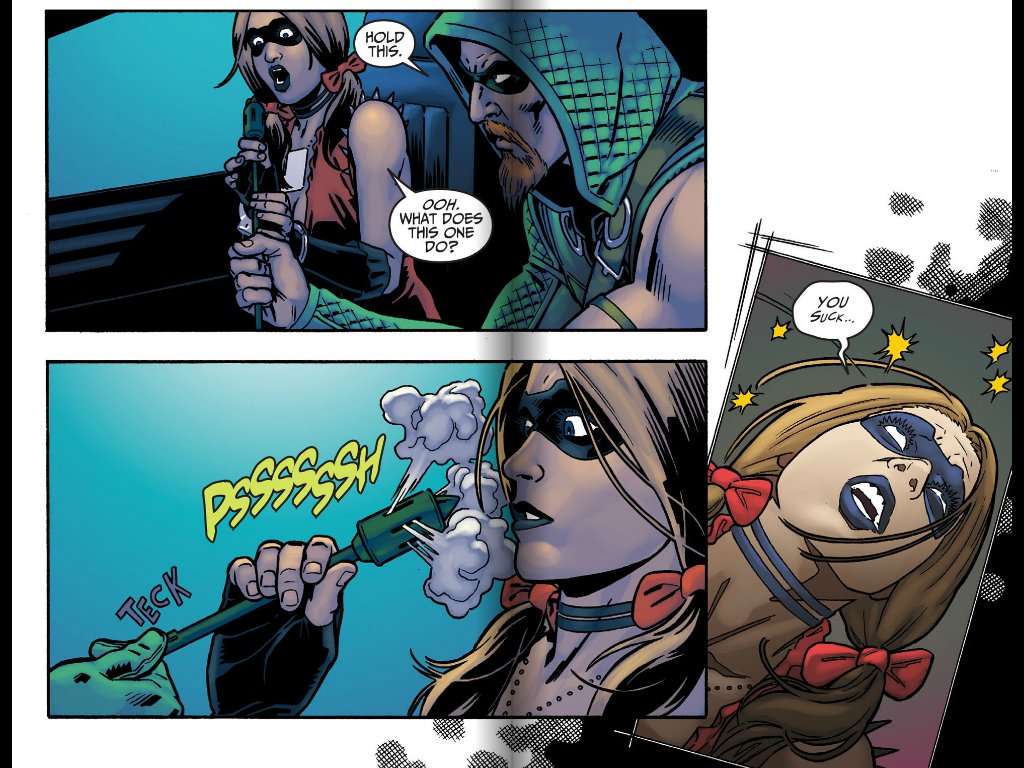 The artwork by Bruno Redondo is some of the best I've seen in recent memory.  He has a gift for expressions that is reminiscent of Kevin Maguire.  The panels are well lain out and the story flows naturally and easily.  The one problem - though I can't fault Redondo for this - lays in some of the shots of Harley that are a little gratuitous in terms of cheesecake.  Then again, given that Harley's costume in Injustice may be the worst one she's ever had in terms of hyper-sexualization (I'm personally torn between this and her new Suicide Squad outfit being the worst), I'm not sure there's anyway to draw Harley in this get-up without it looking ridiculous. 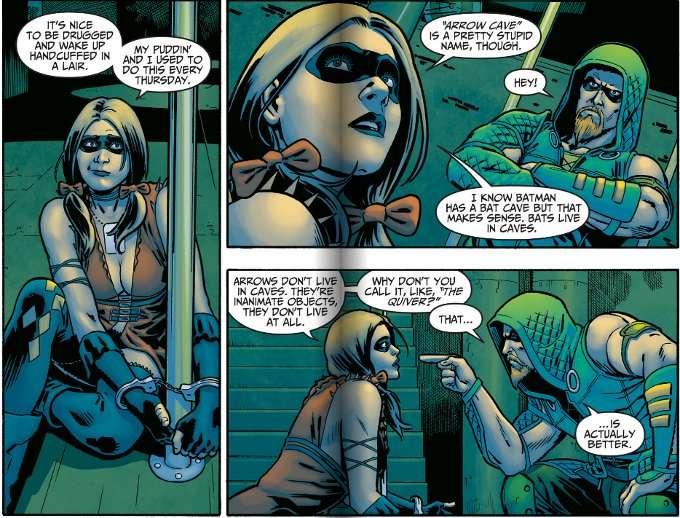 Stupid sexy costumes aside, Injustice: Gods Among Us #5 is a hoot and a welcome respite for fans of Harley and Ollie who aren't too pleased with their respective treatments in the new DC Universe.  Harley's a blonde again, Ollie has a beard and all is right with the world.  Well, except for Superman now being murderous.  But ain't we got fun?
Posted by Starman at 10:24 AM