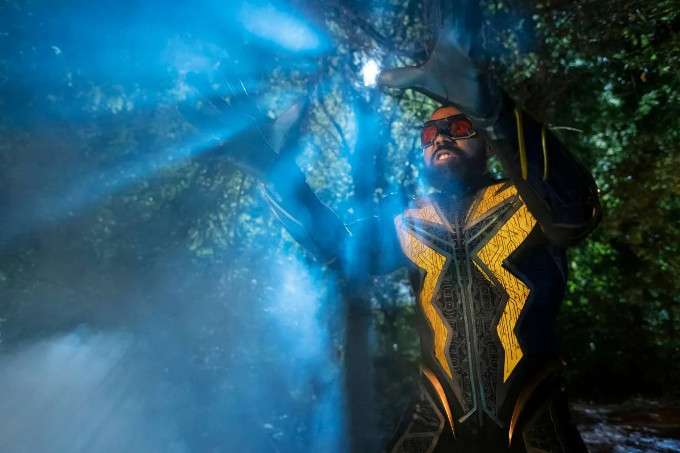 Still recovering from Painkiller's poison, Anissa asks Jefferson for help sneaking a group of metahumans (including her girlfriend, Grace) out of Freeland. But will the Resistance accept Black Lightning's help after he inadvertently stopped one of their earlier escape attempts?  Meanwhile, Jennifer tries to get to know Brandon better, as Gambi asks Lynn for access to ASA mainframe in The Pit.

The "fake-out" scene with the ASA storming the church as Reverend Hold readies a pistol was cheap drama and unworthy of this show.

Brandon's sudden hatred of Jennifer comes out of left-field.

Cress Williams and Damon Gupton sell the scene where Jefferson and Henderson vent their spleens over every single point of contention between them.

Lynn and Gambi determine that the ASA like completely wiped Khalil's limbic system in upgrading him into the new Painkiller. He has an advanced chip in his brain, similar to the digital prosthetic chips used to help blind people regain their sight.

Jefferson: What's up, man? What's wrong with you?
Henderson: Black Lightning is what's wrong with me. And yesterday, he defused a bomb and screwed up a diversion we have for our underground railroad.
Jefferson: What? Wait. Our underground railroad? Plan? So you're involved with planting that bomb?
Henderson: I'm more than involved, Jeff, and I want to bring you in to the fold but I don't know exactly where you stand. Now, one minute, Black Lightning is roughing up the ASA over some damn graffiti, and the next minute, he's saving the ASA from a bomb. Whose side are you on, man?
Jefferson: Wait, you planted a bomb, man, you could've hurt innocent people.
Henderson: I controlled the detonator and made sure no one was in the vicinity.
Jefferson: No, no, you know bombs misfire all the time. The shrapnel could've hit the guard or you. Or one of the children!
Henderson: It was a calculated risk, Jeff, what am I supposed to do. Let the ASA capture more metas?
Jefferson: No, of course not, I'm talking innocent people, you're talking a calculated risk? Are you hearing yourself right now? Hate begets hate, violence begets violence-
Henderson: And toughness begets a greater toughness, yeah, man, I know, you ain't the only one who can quote Dr. King from memory. Now, look, the ASA, ever since they came to Freeland, they have forced me to push their agenda through press conferences, they have taken over my police station. They got one of my officers killed.
Jefferson: Yeah, the ASA locked me up. Poked me like a lab rat, took me away from my family. Beat me down in the street. So I understand you frustrated, you're pissed off. So am I. But I cannot get down with your methods, man.
Henderson: Duly noted for the record. I'm only trying to do what I can to protect this city. Yeah.
Jefferson:  By living a double life. Chief of Police. Member of the resistance. Now you remember how pissed off you were when I didn't tell you I was Black Lightning. Who got the secret now?
Henderson: Are you seriously trying to compare me keeping a secret for 30 days to you keeping a secret for 30 years?
Jefferson: No, look, the point is, we gotta get on the same page.
Henderson: And by same page, you mean doing things the way you would do them. Now, look, this "my way or the highway" mess you run on your daughters, you can't run on me, I know what I'm doing.
Jefferson: All I'm saying is that we gotta communicate our plans with each other.
Henderson: Oh, okay, great, so then next time, Black Lightning goes out on the street, he'll give me a call, right? Huh?
(Jefferson falls silent.)
Henderson: Didn't think so. Since we can't get on the same page, how about you handle the ASA your way, I'll handle it my way

Grace's medication is no longer helping her maintain control of her shape-shifting.

Anissa has a relaxation program installed in her smart home to help Grace regain control of herself.

Anissa's powers still have not returned.

Gambi analyzes the footage he captured of Anissa fighting Painkiller and confirms that it is Khalil, somehow back from the dead.

Gambi asks Lynn for help in hacking the ASA mainframe, saying he needs the information to help protect Anissa and Jefferson.

Major Grey says that Agent Odell is expected to make a full recovery, but she is Acting Director of the ASA operations in Freeland until then.

Jennifer asks Major Grey for all the ASA information on Dr. Jace, lying and saying that she and Agent Odell were working on a project that Major Grey clearly wasn't privy to.

The Resistance attempt to sneak a group of meta kids out through an ASA check-point. Their plan is to lure the guards away by having Two-Bits give them sports drinks laced with a diuretic. Henderson will then set off a bomb to act as a distraction while Reverend Holt drives a hummer with the kids out of town. Unfortunately, this plan falls apart when Black Lightning happens to show up and shorts out the bomb.

Reverend Holt believes that Black Lightning is working for the ASA now.

Lynn has a new assistant, Dr. Blair, who kisses up to her furiously on his first day at work.

Lynn had writings published in the Journal of Neurosurgery.

Erica Moran's power is revealed to be that she can convert the kinetic energy she absorbs into super-strength. She can now hold this energy at 100% capacity and be stable. However, any attempt to use the strength immediately saps her energy reserves. Lynn believes she will be able to expend less energy as she increases her stamina, but Major Grey insists that only 100% output will suffice.

Major Grey agrees to give Lynn access to all the Green Light kids data, but nothing more.

Jennifer goes to Brandon and offers him help finding information on Dr. Jace.

The ASA storm Reverend Holt's church. Thankfully, it is revealed that he and the meta-kids are now taking refuge in the back room of Two-Bits bar.

Anissa asks Jefferson to take her place escorting the next group of metas out of Freeland because she still hasn't recovered her powers. Despite having issues with the Resistances apparent violent tactics, Jefferson agrees.

Black Lightning steps in and stops a group of Resistance fighters from shooting ASA commandos. Unfortunately, Major Grey's response is to ignore it when two of her commandos shoot the disarmed and helpless insurgents. She further threatens to call in an air-strike and destroy Freeland if Black Lightning does not let her and her men go.

Painkiller is kept in a stasis state when not active. There is a chip in his brain controlling his functions, but Khalil Payne's memories are still intact.

Lynn and Gambi discover that Painkiller has been sent on four missions so far; kill Nichelle Payne (302), blow up a Markovian safehouse (303), eliminate the drug-lord Sinzell (304) and kill Blackbird (305)

Painkiller is unable to access Khalil Payne's memories. He does recognize Lynn, but only because the names of all ASA personnel were programmed into his memory.

Lynn insists that she can save Khalil. Gambi thinks it would be far kinder to kill him.

Lynn tells Gambi not to tell Jennifer about Khalil.

Jennifer annoys Brandon with her promises to give him Dr. Jace information if she'll let her keep testing her power against his.

Anissa gives Grace her necklace as a remembrance. The necklace also has a tracking device in it.

The ASA ambush Black Lightning and the metakids. In the confusion, Grace runs off in a panic, eventually changing into a leopard and killing one of the commandos.

Grace figures out that Black Lightning is Jefferson Pierce based on his scent. She can still smell like a leopard as a human and their smells matched.

Grace and the meta kids escape to South Freeland.

Jennifer gets the Dr. Jace files from Major Grey.

Painkiller is seen sparring with Vernon - a metahuman with the strength of five average men. He is able to defeat him easily.

Another filler episode that drags out all the storylines with forced drama that doesn't work. It feels like the show is just treading water until the Crisis tie-in we know is coming and it's a little hard to care when our main character isn't involved in 80% of the action and it looks like this Earth is just going to be erased, according to the ads for Crisis.
Posted by Starman at 4:16 PM