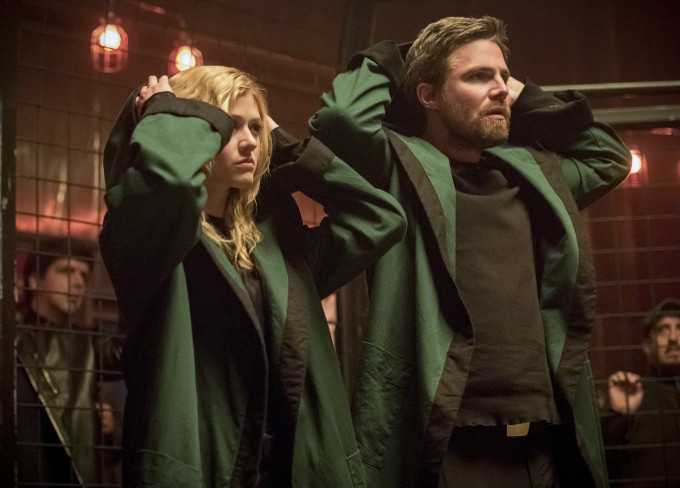 The search for a weapon to use against The Monitor leads Oliver, Black Siren, Mia and William to Russia, as Diggle seeks out an old friend for help in procuring the plutonium they need for the weapon. But treachery is afoot and a trusted ally will turn upon Team Arrow before their business is concluded.

The flashback sequences of Arrow Season 5 set in Russia.

Diggle says that Thea told Oliver that Roy left her without even saying goodbye, yet two episodes ago Thea said nothing of the kind and indeed said that Roy was off dealing with his demons and that he would be back. (Maybe Oliver knows a BS departure story when he hears it and figured Thea was just justifying Roy's running off?)

As always, David Nykl is a delight as Anatoly and it is good to see the show gave him one last hurrah in the final season.

The arena fights are well choreographed.

Diggle and Roy go to a facility in the nation of Bialya to get the plutonium they need.  In the DC Comics universe, Bialya is a fictional Middle Eastern nation located on the northern borders of Iran and Saudi Arabia. It is usually depicted as a haven for terrorists and supervillains, having at one point been ruled by the villain Queen Bee.

Oliver trains Mia in the use of his various trick arrows. These include explosive arrows (lighter payload, meant to divert and disable), acidic arrow (meant to breach covertly or weaken structurally) and bolo arrows (to secure and subdue). Oliver notes it is good not to become dependent on the trick arrows, but they can be useful in stopping a fight that needs to be ended quickly or ending one before it truly begins.

Oliver uses variable acceleration to break the pattern of an enemy's attack and get past their guard.

William creates a facial recognition algorithm to track down the general Curtis mentioned.

Before going off the grid, General Alexi Burov was working on a weapon called a pulse wave generator that could replicate the energy effect that destroyed Earth 2.

The pulse weave generator requires plutonium to power it.

Anatoly: Now, I have seen some very crazy things in my life, but adult children of Oliver Queen sitting in my bar... (To William) I hope you do not think badly of me. Last time we met, you were little, and I was on wrong side of history.
William: (in Russian) Water under the bridge.
Anatoly: (pointing to William) I like this one already.
Oliver: I was surprised to learn that you were in Russia. I thought the Maldives would be permanent.
Anatoly: Oh, with Diaz dead, so reason to stay away.
Oliver: (smiling) You got bored.
Anatoly: I miss borscht. So I reinvent myself. Bar owner. Heh! But I got inspired, too. I got really good recipe for piña colada. You should try. It's delicious.
William: Who wouldn't want to be reminded of the tropics in these cold Russian winters?
Black Siren: (looking around empty bar) Well, apparently, his customers.
Anatoly: (dryly) Nice to see this one's still charmer.

William: Have you ever hacked a CCTV camera?
Black Siren: No.
William: Well, congratulations. You're about to learn the only upside of a Russian surveillance state.

Diggle: You may have started on Lian Yu, Roy, but that's not where you ended. Felicity sent William to that island to find you because she believed in you. You go back to Star City, man. You work with the kids. You help them save the city, Roy.
Roy: How is that possible?
Diggle: Because you found the way to control your bloodlust. You found that it was by being part of a team. You kept your distance because you believed that you were a danger to everyone around you, but the real danger was believing that you can deal with your past alone.
Roy: It's pretty ballsy thinking you can give me the answer 20 years earlier.
Diggle: Yeah, well, hopefully, this time, you don't have to wait that long.

Anatoly: I don't know about you, but I could handle drink without umbrella.
Oliver: I'm good, thank you.
Anatoly: If by good you mean...How you say moody, yes, you are. Is this because you ruin family vacation?
Oliver: I have to send them home for their protection.
Anatoly: Do you not think they can handle it?
Oliver: They can handle it. I just I want to keep them away from the Bratva.
Anatoly: You mean keep them away from your Bratva past.
Oliver: Dark time for me.
Anatoly: That is understandable. You are ashamed. You have truly done some terrible things.
Oliver: Thank you for the reminder.
Anatoly: But you also have done some good things. It's important that the kids see both.
Oliver: Right, but why would I want to share some of the worst mistakes of my entire life with my children?
Anatoly: That is the thing about teaching. It's not about what you want to say. It's about what they need to hear. Remember first thing I taught you?
Oliver: "Living is not for the weak."
Anatoly: Your children are not weak, Oliver. They're also not children. Whatever it is you have to say, they can handle it. If you do not, they will never learn to be heroes.

Oliver: Thank you. I always seem to end up in your debt.
Anatoly: We are beyond keeping score. We have been friends, we have been enemies. From now on, let us just be brothers.
Oliver: Not the Bratva kind.
Anatoly: No! Real family, like the one you have now. I can be the fun uncle.

Anatoly: Oh, Laurel, uh There's something I want to say.
Black Siren: What? One last hilarious Russian joke for the road?
Anatoly: Sorry to doubt you. I guess leopards really can change spots. Or in your case, bird, feather.
Black Siren: (smiling) I thought you said you weren't sentimental.
Anatoly: Maybe I change, too. Like you.

Oliver trains Mia in archery using the tennis ball test we first saw him utilize in the Pilot. He explains he uses bouncing tennis balls as targets because only a direct, precise hit will pin the ball. If you are off just a little bit, it deflects the arrow.

General Alexi Burov is the man in Russia Curtis mentioned in 804 who has plans for a weapon that can replicate the energy blast that destroyed Earth-2.

The pulse weave generator requires plutonium to power it.

Diggle says he knows of a facility in Bialya, where a two-man team should be able to steal some plutonium. Bialya was briefly mentioned in 117.

Connor left to check up on his mother, Sandra, and his past self.

Black Siren figures out that Lyla is working for The Monitor and against Oliver, before Lyla gives her orders on behalf of The Monitor.

Lyla tells Black Siren she needs to get the plans for the pulse wave generator before Oliver.

Diggle finds Roy Harper, who is once again posing as a mechanic - this time using the name Jason.

Anatoly was last seen in 706. He moved back to Moscow and became a bar owner, having become bored hiding out under the fake identity Felicity made for him and having no reason to stay in hiding with Ricardo Diaz dead.

Oliver asks Anatoly not to use his Bratva contacts in finding information on General Burov.

William tells Oliver that he met Mia in an underground fight club.

Oliver had no idea that Mia was a cage fighter for a while.

Oliver refuses to let Mia or William get involved in this mission. They think it is because he thinks the Bratva is too dangerous. In truth, he doesn't want them to know about his dark past in Russia.

Oliver is still recognized as Kapiushon from his time in Russia.

General Burov agrees to give Oliver the plans for the pulse weave generator if he can win a fight against The Blood Bath's current champion.

Before General Burov can make good on his deal, the Bratva steps in.

Mia is caught trying to sneak around The Blood Bath, leading to her and Oliver being captured.

Oliver tells Mia about how he used to be part of the Bratva and how he was really trying to hide his dark past from her and William.

Mia is put through the "ring the bell" gauntlet which Oliver faced to join the Bratva in 502. Unlike Oliver, she doesn't quite make it.

Diggle tells Roy about the events of the flash-forwards of Season 7 and how Roy went back to Star City to help Oliver's children save the city. He also tells him that he eventually discovered that the secret to controlling his blood lust was to surround himself with friends and fight with them - not close himself off from everyone he loved.

Oliver demonstrates his old trick of dislocating his thumbs to escape from handcuffs. Mia asks him to teach her that trick.

Oliver comes up with a new plan - he and Mia go into the ring as a team with William posing as the rich guy bringing them in. While they are distracting everyone, Anatoly and Black Siren will steal the plans.

Oliver tells Mia about his time in Russia and on Lian Yu, so they know about the mistakes he made and the worst times of his life.

Roy decides to stick around in Star City for a while.

Oliver and Anatloy agree that they consider one another brothers now.

Black Siren tells Oliver and Diggle about the deal Lyla made with her to try and get her to betray the team.

Oliver, Diggle and Black Siren are taken out with tranquilizer darts when they confront Lyla.

A worthy tribute to one of the more underrated aspects of Arrow's history and a fantastic swan song for its greatest guest player. More, it finally brings an end to the far-too-stretched out will-she/won't she Black Siren arc and plays off the build up to Crisis beautifully. You almost forget that nothing of importance happens plot-wise until the final scene.