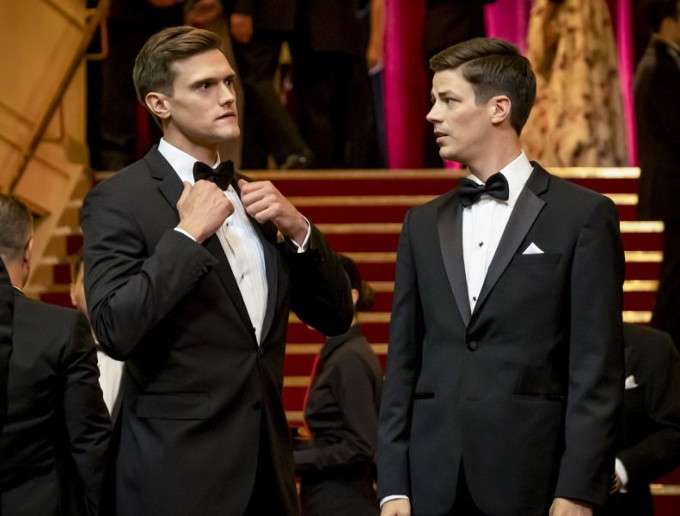 Barry tags along with Ralph on a case, hoping to prepare his protege for his new position as Central City's most prominent superhero. Yet it is Barry who will wind up learning a lesson, as he winds up in way over his head trying to go undercover. Meanwhile, Cecile tries to help Chester P. Runk get his life back in order as Nash Wells seeks out some unlikely help in accessing The Monitor's lair.

James Bond movies. (Honestly, the episode hangs so many lampshades on the elements it references, I feel no need to list them all here.)

It should be noted once again that Barry sucks at maintaining his secret identity and anyone who heard him using his real name at the party should be able to figure out he's The Flash now... even if they think his name is Allen Barry.

Hartley Sawyer actually does a credible job playing Ralph as a Bond-type. While the odds of an Elongated Man spin-off are seeming increasingly unlikely, Sawyer proves he can front a story in this episode.

The music and cinematography do a good job of evoking the spirit of the James Bond films.

Despite being around since the Silver Age of comics, Ralph Dibny has never really had an Elongated Man emblem like The Flash's famous lightning bolt on a white circle. Most of his costumes work an E into the design somewhere.

Ralph and Barry spend most of the episode in Midway City. In the classic DC Comics universe, this was the hometown of Hawkman and Hawkwoman in the Silver Age of comics. Depending on the writer, it is said to be similar to Chicago and located in Illinois or located in Michigan and comparable to Sault Ste. Marie.

Ralph makes mention of an exclusive fashion designer named Victoria Veil. This seems to be a bit of a knowing nod to long-time Batman love interest Vicki Vale, though the last name is spelled differently and the famous Vicki Vale was a reporter - not a fashion designer.

Eternium creates an anti-vibrational force field that prevents speedsters from phasing through it.

Violent contact with Eternium, such as a jackhammer, could trigger a catastrophic molecular blast.

One of the tools in Cisco's lab is a sonic wrench.

Ralph as a camera built into his bow-tie.

Ralph has an explosive cuff-link.

The EYE-3C9 satellite system (aka Ring of Fire) is equipped with 15 dioptric long-range missiles.

Remington Meister: I must say, I did not expect Central City's resident superhero to crash my little gathering.
Ralph: And I must say, I'm surprised by all the Bond villain cliches. I mean, you've got the accent, the diabolical scheme, even the silent but deadly henchperson.
(Ultraviolet enters the room.)
The Flash: Ultraviolet? I sent you to Iron Heights.
Remington Meister: Luckily, she has friends in low places.
The Flash: And let me guess, you're gonna add my unmasking to your little auction?
Remington Meister: Oh, I could care less about your secret identity, Flash. My interests are global. And to think, Mr. Dibny, that it was the Flash that set off my meta-activity monitor that then triggered the security protocols that got you caught. Danke schon.
Ralph: Do you expect me to talk?
Remington Meister: No, Mr. Dibny. I expect you to die.
Ralph: Oh, come on! That line is literally from Goldfinger!

Ralph: Look, tonight's job was for Ralph Dibny because both parts of my identity have value. The same is true for you, only tonight I could've used your civilian half. What I'm trying to say is Barry Allen is just as important as the Flash. Try to remember that. I know I will.

Nash Wells claims that he tracked the Monitor to Earth 1 and that the hole in the sewer of Central City he found leads to an inter-dimensional portal that should lead directly to The Monitor.

Cisco does not appear in this episode, presumably being busy with Gypsy's remembrance ceremony on Earth 19.

Chester P. Runk, last seen in 601, fully recovers and is released from the MAC.

Barry designs an official Elongated Man emblem for Ralph to pin to his costume.

Barry and Joe plan to surprise Ralph with a passing-of-the torch ceremony tomorrow. The problem is Ralph plans to leave for Midway City to check on a Sue Dearborn lead that day. Barry decides to tag along to make sure Ralph gets back to Central City in a day.

Ralph thinks Sue Dearbon might be in Midway City because Sue was seen wearing a one-of-a-kind Victoria Veil dress in Milan right before she disappeared. A woman wearing the same dress was spotted at a gala in Midway City three weeks earlier.

The host of the gala Ralph and Barry crash is a German named Remington Meister.

While sneaking in, Ralph and Barry meet a woman named January Galore who immediately sees through their disguise. Ralph later identifies her as an underground weapons dealer.

Nash Wellls runs into Allegra Garcia at the Central City Citizen. He convinces her to use her powers to help him scan for Eternium in the rock wall, in exchange for a world-shattering story.

Cecile helps Chester unfreeze his bank accounts, gets his driver's license reinstated and even manages to get his parking tickets erased.

Cecile decides to use her powers to help Chester ask out his crush, Natalie.

The dress Ralph identified as a one-of-a-kind turns out to have a duplicate, commissioned by a woman named Idna, as many designers will copy themselves for the right price.

Remington Meister says he has not seen Sue Dearborn at one of his galas in six months and confirms that she is not on his guest list. He also realizes that Ralph and Barry are not on the guest list either.

Ralph identifies another of the party guests as Riggs Wellington - a Bratva counterfeiter.

Cecile misreads Natalie's emotions as Chester is talking to her, giving him the absolute worst advice.

Killer Frost says that The Book Of Ralph advises you to be yourself when asking someone else out.

Nash explains the idea of alternate universes and dopplegangers to Allegra.

Nash also accidentally lets it slip to Allegra that Barry Allen is The Flash.

Ultraviolet, last seen in 602, has been broken out of Iron Heights and is now working as muscle for Remington Meister.

Remington Meister is auctioning off a satellite weapon called The Ring of Fire, capable of destroying a city from orbit. He plans to destroy Central City to prove that it works.

Allegra makes reference to Ragdoll (last seen in 520) and how the freakiest thing in the world is watching him eat.

Cecile realizes that she was projecting her own uncertainty over her new job onto Natalie rather than reading her.

Allegra is afraid of using her powers and becoming like her murderous cousin. Nash convinces her that the powers do not make her bad and that she can use them to help people... like him.

Nash says that Allegra reminds him of some one but does not elaborate.

Ralph and Barry are able to stop Remmington Meister from destroying Central City and break up his crime ring.

Cecile encourages Chester to look into a job at STAR Labs.

The Flash officially passes the torch to Elongated Man in a ceremony at CCPD HQ.

Elongated Man and Joe West officially recognize Barry Allen for his work as a Cold Case CSI and all the people he has helped.

Ralph shows Iris a photo of a man wearing a familiar looking pin and tells her about how Ultraviolet showed up again in Midway City.

In the final scene, Ramsey Rosso attacks Elongated Man after he meets with Iris.

A fun filler episode that does a fairly good job of disguising the fact that the regular cast is barely in this episode. I personally could do with a lot less of Cecile's wacky hijinks, but pairing her with Chester somehow manages to ground his character and make you want to see more of him interacting with Frost and the rest of the STAR Labs gang. Ditto Allegra and Nash Wells, who aren't bad but just seem to be distracting away from the characters we've known and loved since Season 1. Still, for the cheesy fun of the Ralph as James Bond stuff, I can forgive a lot.
Posted by Starman at 8:46 AM