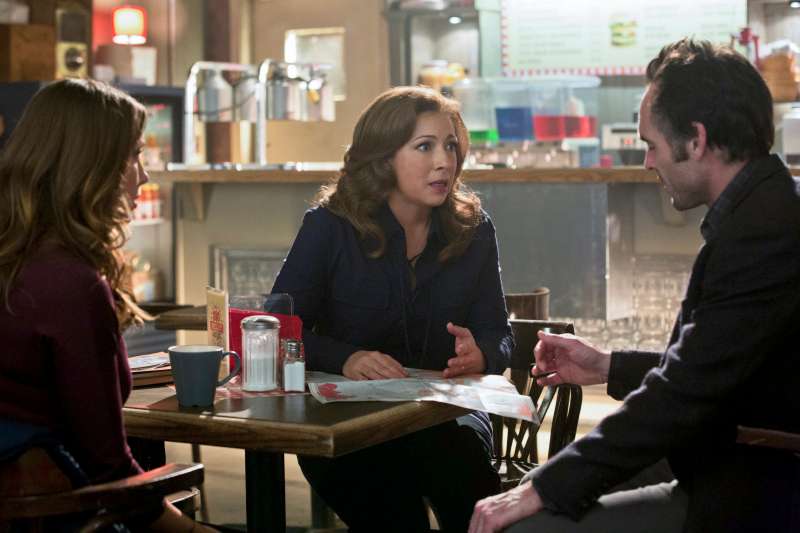 Things are going great for Oliver Queen.  His relationship with cop McKenna Hall has become serious and his nightclub is just a few days from opening.  Yes, things are going great... until Helena Bertinelli shows up at his house and her father's lawyer turns up dead.  Seems Frank Bertinelli cut a deal to go into Witness Protection and The Huntress is out for blood.  Worse, she expects Oliver to help her take on a small army of FBI agents... or else.

Laurel attempts to get her father to listen to her mom regarding what she's spent the last few years researching - evidence that like Oliver Queen, Sarah Lance survived the sinking of The Queen's Gambit.  The only problem is that the evidence amounts to one photo of a woman who looks only vaguely like Sarah and a map of the area around the island where Ollie was found which shows hundreds of islands a person could live on.  Even ignoring the spotty evidence, Quentin Lance is in little mood to talk to his estranged wife about anything - much less the possibility that the daughter he's finally come to mourn might be alive.

Thea Queen continues to shadow purse-snatcher Roy Harper.  She offers to help him get a job working for her brother but the young crook is reluctant to take charity from anyone.  Still, there is a hint of something developing between the two youths.

On the island, Ollie and Slade plan on how to disable the Scylla weapon and stop Eddie Fyers from starting a war.  In the end, Ollie comes up with a better idea than simply blowing it up - stealing the circuit boards from the weapon's interior and using it as leverage.

Green Arrow: Year One (The Island sequences), Huntress: Cry For Blood (Helena Bertinelli seeking revenge against her family, even as a more experienced vigilante tries to train her to be more balanced) and the generally repeating theme of leverage.


Considering all the trouble Ollie went through to make sure the police could never seriously accuse him of being The Hood after Damaged (105), he does seem awfully worried about Helena telling the cops his secret identity even though she's hardly the most credible witness.

Paul Blackthorne gets some great moments playing all over the emotional spectrum as Quentin Lance.  We've seen him Blackthorne play Lance as the tough guy for most of the show's run but this is the first time we see just how badly his daughter's death and his wife's departure shook the man behind the badge and Blackthorne plays Lance's confusion perfectly.

Colin Donnell plays Tommy Merlyn's internal conflict perfectly.  As far as he's concerned, The Hood is a murderer.  But he's also the one man Tommy trusts more than anyone else in the world.  Tommy hates what Oliver is to the point where he refuses to hear any of Ollie's excuses as to why he does what he does and yet Tommy can't bring himself to turn Oliver in or share Oliver's secret... even with the woman he loves!  And that's how Tommy feels even before Ollie's secret identity causes him to get his wrist and throat injured.

Helena's stripper costume seems to be based in part on Jim Lee's redesign of the Huntress costume, with a dominant white-crosses on purple theme.

Diggle is seen reading a newspaper which mentions the assassination of the President of Bialya.  Bialya is a fictional Middle-Eastern country in the DC Comics Universe, said to lie to the North of  Saudi Arabia and Iran.

DJ Steve Aoki plays himself, working as the DJ on Verdant's opening night.

Coast City, where McKenna is moving, is best known as the hometown of Hal Jordan (a.k.a. Green Lantern) in the DC Comics Universe.

Oliver's plan to disable Fryer's super-weapon involves stealing the circuit boards on the grounds that the weapons are completely useless without the inner workings.

Ollie:  She was in my house. She made a not so veiled threat.  I want extra security around my mother and sister.
Diggle: I'm way ahead of you, man.
Ollie: Thank you -
Diggle: Just doing my job.
Ollie:  - for not saying 'I told you so'.
Diggle: (beat) The night is young.

Ollie: I'm sorry.  But... I kept this a secret to protect the people that are closest to me-
Tommy: Do you think that's what I care about?  That my feelings are hurt?  You're a murderer.  A killer.  You were my best friend in life but now it's like I don't even know you.
Ollie: You're right.  I've changed.  Listen - buddy?  Now, I can explain to you.  Now I can explain how and why-
Tommy: What would be the point?  I wouldn't believe a word of it anyway.

(Regarding Huntress and her blackmailing Ollie into helping her find her father)
Ollie: What do you want me to do?!  Do you want me to kill her?
Diggle: I think you would have a long time ago if she looked like me instead of the T Mobile girl.

The whole scene in the police questioning room where Helena expertly plays McKenna Hall and Quentin Lance by taunting them about Oliver Queen, all the while knowing they have no idea she answered their question about who The Hood is honestly.

Tommy:  Hey.  I heard about McKenna.  You okay?
Ollie: ... not really.
Tommy: Look, I know that I've been a jerk lately.  I just couldn't understand how you could keep such a huge secret from me.  But I never considered the toll it must take on you.
Ollie: Lying to the people that are closest to me... is the hardest part.
Tommy: I get that.
Ollie: (sighs) I was wrong.  That I could have it both ways To think that I can do what I do and still have a normal life with anyone.
Tommy:  Except if you're alone... you're never going to be happy.
Ollie: Maybe not.  But me being happy isn't what's important right now.

Helena Bertinelli, last seen in 108, returns to Starling City.  Diggle is seen reading a newspaper which reports that the Biaylan President was assassinated and Deadshot (last seen in 116) is the prime suspect.  Helena refers to traveling the world, which occurred in Issue #11 of the on-line Arrow comic.  At some point during this time Helena has been trained to catch arrows. Felicity is a skilled enough hacker to break into the FBI's computers undetected.   After the fight with Huntress leaves McKenna injured with a shattered femur requiring at least one year in rehab, she plans to move to Coast City and stay with her sister.  Reportedly Coast City has the finest physical therapy facilities in the country. Ollie says he can be whatever McKenna needs after she basically dumps him.  Quentin finally agrees to hear Dinah's story.

Helena refers to the events of Issue #11 of the on-line Arrow comic, which showed her traveling the world and training.

Dinah Lance only shows up in two scenes and everything she's doing is defined in terms of her husband's inability to cope with emotional trauma.  While it is a nice shifting of stereotypes to have the man in a relationship being the emotionally upset one, it still doesn't change how ill-defined Dinah is as a character so far.

Laurel doesn't fair much better, with most of her scenes in this episode being devoted toward either dealing with her father's skepticism or chewing Tommy out for not being there to help her in dealing with her father's skepticism.  A scene of both mother and daughter together, going over the evidence on their own would have been nice after the last episode's cut-off.  Hell, ANY scene of both mother and daughter together would be nice given how long it's been since Dinah and Laurel have spoken, much less seen each other.

Finally, McKenna - so quickly introduced as a love interest for Ollie - is just as quickly dismissed after receiving a career-ending injury that mostly serves to give Ollie angst over losing a girlfriend and being responsible for her getting hurt and ruining her life.

A good starting point after the brief break in the episode airings.  The performances in this episode are so good that one can forgive the Thea/Roy subplot being completely unrelated to the main action of the episode and the Laurel/Dinah/Quentin subplot not really going anywhere and Dinah being an incredibly flat character thus far.
Posted by Starman at 10:58 PM