I am of two minds regarding 'Huntress Year One' - the eleventh chapter of the Arrow web comic.  On the one hand, the story by executive producer Mark Guggenheim is well-crafted and does provide a plausible direction for the character of Helena Bertinelli following the events of 'Vendetta' while simultaneously paying homage to the character's roots in the comics.  On the other hand, there is one aspect of the story that I fear exists only for the purposes of crass titillation and diminishes Helena as a character. 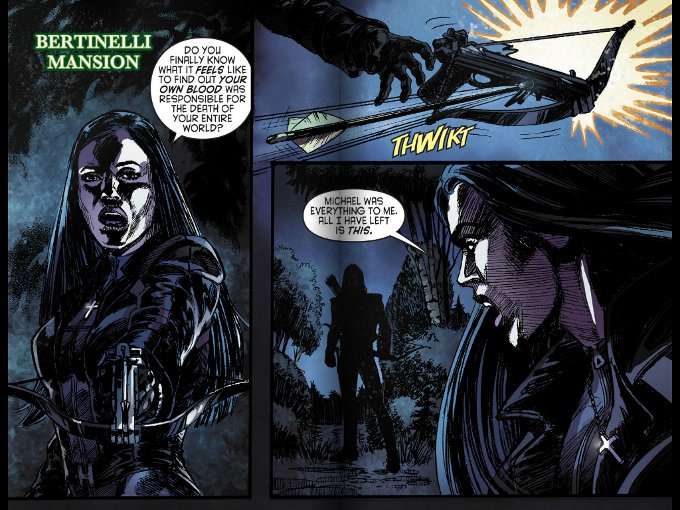 The basic gist of the story is that having left Starling City and Oliver Queen behind her, Helena travels to Sicily trying to find the sense of the belonging that she lost when her mobster family had her fiancee killed.  What Helena finds instead is La Morte Sussurrata - an Italian branch of the Hashshashins (a.k.a that group from the Assassins's Creed games) who agree to train Helena in their ways... for a price.  It is this price that bothers me in several respects but not for the reasons you might think.

Helena Bertinelli, in the original comics, was portrayed as a woman who was willing to play off her sexuality to complete a mission.  Even in Gail Simone's run on Birds of Prey, Helena was willing to agree to a date with a perverted rental car agent named Josh to get information and wound up having a one-night stand with the guy.  So as sleazy as it is, I can't dismiss the idea that Helena would agree to sleep with agents of the Assassins Guild in exchange for training as being entirely out of character. 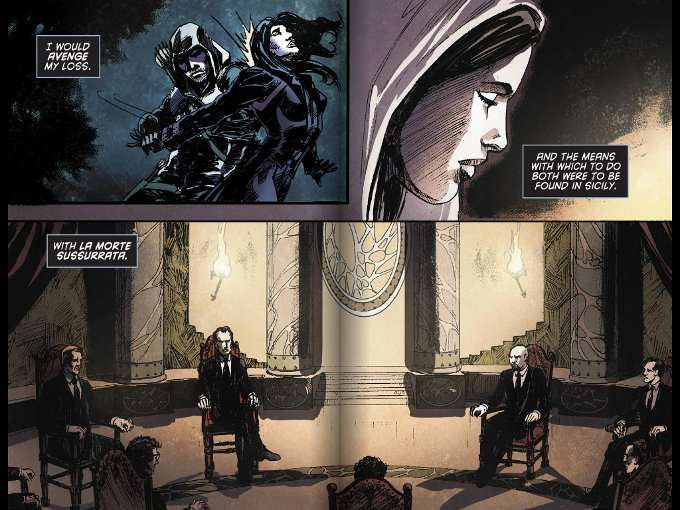 The problem is that Helena says that she was "trading on the only assets I had".  While I can understand her being cut off from her family's fortune in the wake of her father's arrest (even if the Mafia didn't lock her out, The Feds almost certainly would have frozen Frank Bertinelli's personal accounts), it does raise the question of how she got to Italy in the first place if she was completely without resources.  And granting that she might not have the money put aside to buy her way into an elite, secretive group of assassins, what does it say about the organization that they're willing to take in prospective students purely on their sexual availability? 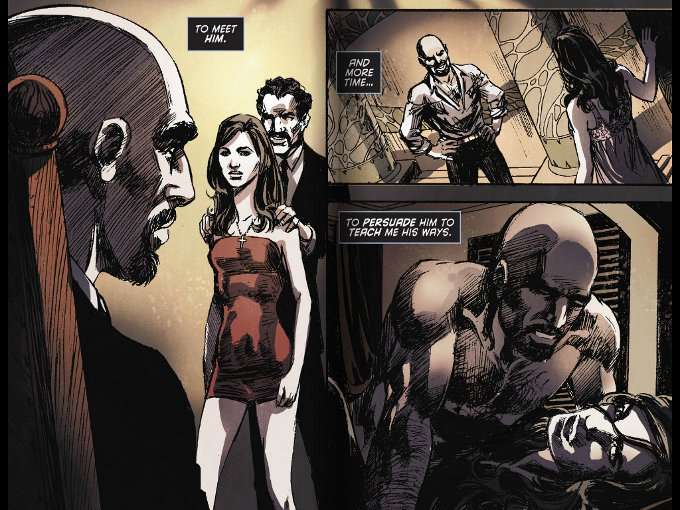 The one aspect of this book I'm not conflicted about in the least is the artwork  Mike Grell is my favorite Green Arrow artist of all time for a reason and this issue showcases Grell's skill as an artist and inker.  To my mind, nobody can ink their own work to elicit a shadowy, dramatic feeling like Mike Grell.  The action scenes - depicting Helena and Ollie's fighting in flashback - are well choreographed and well displayed.  And I feel it worth noting that despite being famous for showing off athletic figures in his artwork, Grell does not make the panels in which Helena is seen "paying for her education" exploitative, despite the sleaziness of the situation.

Would I recommend this issue?  Yes.  While I'm conflicted about how Helena apparently sleeps her way into The Assassin's Guild, the conflict made me think more than most of the comics I've read in recent memory.  Ignoring that, the story is a good one and is well told.  Mike Grell's excellent artwork only seals the deal.
Posted by Starman at 9:58 AM