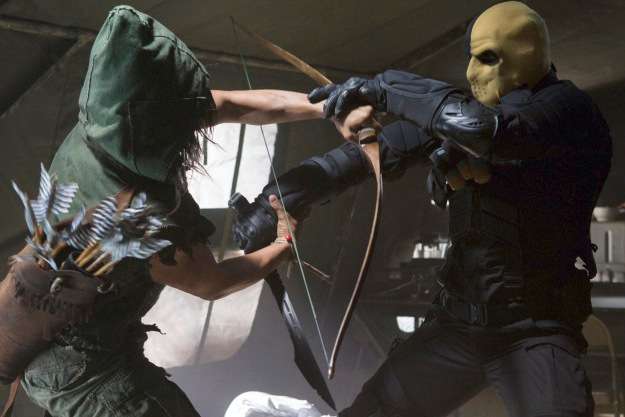 Arrested for the crimes of The Hood after Quentin Lance discovers video footage showing Ollie retrieving his costume from a trash can, things are looking bleak for Ollie until Laurel Lance agrees to take his case and manages to keep him out of jail pending trial.  Unfortunately, he has to agree to an electronic tracking bracelet, which will make his nightly activities as The Hood impossible to continue.  Luckily, Ollie has Diggle to depend on doing the leg work while he plots against an illegal arms dealer while hiding behind the guise of a gigantic prison-themed house party.  At the same time, Walter Steele confronts Moira Queen about what the recovery of The Queen's Gambit means as the organization uniting so many of Starling City's movers and shakers make their move against the alleged vigilante.

Green Arrow: Year One (the island sequences), The Fall of Green Arrow (Ollie put on trial for murder). Robinson Crusoe (Ollie's learning survival skills), My Wicked, Wicked Ways (Ollie's behavior in and out of court mirrors that of Errol Flynn when he was put on trial for rape, right down to his romancing the daughter of the head cop on the case against him ), the Robin Hood legends where Robin was impersonated by another of his Merry Men, The Scarlet Pimpernel (a vigilante is portrayed by more than one person) and Romeo and Juliet (Capulet/Montague family feud mirroring Lance/Queen conflict).

To quote my friend Keith regarding this episode, "Three Words: Conflict of Interest."  There's no way any honest police force would allow Quentin Lance to personally handle the arrest of his daughter's ex-boyfriend, particularly on a high-profile case and when the ex-boyfriend is a member of a wealthy family that can afford a lot of lawyers.  Laurel seems to acknowledge that acting as a public defender against a prosecution case built by her father is going to raise some interesting legal questions, to say nothing of the defendant being her ex!  There's at least three different ways this could end in a mistrial that I can see.

It's hard to single out any one performance this time, as they're all so uniformly excellent.  Stephen Amell continues to play Oliver Queen on multiple levels, from the party-boy facade to the cool-handed "Hood" to the truly damaged and vulnerable man hiding behind all the masks that he briefly lets Laurel Lance see.  Katie Cassidy does a fine job of playing off of Laurel's various conflicts (duty of job vs. love, love of father vs. love of ex-boyfriend, wanting to comfort Ollie but knowing she should know better.)  The scene with the two of them and Paul Blackthorne during the polygraph is magical.

The supporting cast does well, as well.  Susanna Thompson starts to melt a bit as Moira Queen, revealed to be not so sinister as originally thought but between a rock and a hard place because of her past associations.  Colin Salmon shows some brilliantly restrained acting as Walter Steele.  Willa Holland rocks her brief scenes with Ollie, suggesting that she is starting to suspect the truth about her older brother.  David Ramsey, as Digg, beautifully tells off Ollie for trying to snowball him into replacing him for a night as The Hood.  Really, there's not one wrong note this time.

The script itself is noteworthy, with several links as it moves between the flashback story and the present day (Ollie having his shirt opened by someone else, Ollie being asked if he recognizes someone in a picture, etc.)

The scenes of Ollie being tortured are genuinely tense and probably as brutal as anything that can be seen on broadcast TV.

The fight between Yao Fei and Deathstroke and the final fight scene between Ollie and the weapons dealers both have amazing choreography.

Kate Spencer, the DA of Starling City, shares her name with another Kate Spencer from the DC Comics Universe, who was also a DA.  This Kate Spencer was the 8th hero to go by the name Manhunter.

Edward Fyers was a regular supporting character during the Mike Grell run of Green Arrow, though he went by the name Eddie and was American - not British.  As on the show, Eddie was a soldier of fortune who did a variety of odd jobs for questionable people and organizations.

Though not identified by name, the figure in the half-orange/half-blue mask who tortures Ollie is clearly Deathstroke The Terminator a.k.a. Slade Wilson - a mercenary/assassin most frequently seen fighting the Teen Titans in the comics.  In recent years, he did develop something of a rivalry with Green Arrow, following the Identity Crisis mini-series.

Reference is made to Laurel having a Halloween costume with "those horrible fishnets".  The most notable feature of most of Black Canary's costumes in the comics are fishnet stockings.

(After Ollie's first pitiful attempt at archery)
Yao Fei: (something in Chinese)
Ollie: What does that mean?!
Yao Fei: You will die badly.

Ollie: I'm confined to this house for the foreseeable future - I might as well make the most of it!  And this party is going to be themed.  I'm thinking... Prison!   Burning Man Meets Shawshank Redemption.  The invite says "Come Before Oliver Queen Gets Off!"

Digg: Oliver, don't you imagine there's enough trouble you're in this week than to go after this guy?
Ollie: I imagine what would happen if a street gang got their hands on military-grade hardware  I imagine our cities - streets- turned into a war zone.

The whole Polygraph scene.  All of it.

Yao Fei gives Ollie some genuinely good advice about archery being based around breathing.  The DA in Starling City is named Kate Spencer.  Quentin Lance's wife left him after Sarah Lance's apparent death.  Walter Steele makes arrangements with his head of security to have The Queen's Gambit moved quietly.  The security head dies in a car-crash shortly after.  Moira Queen is called in to a meeting with The Well-Dressed Man (John Barrowman), who is concerned that Ollie is "The Hood" and that Moira might be attracting negative attention from the police/DA.  He has an assassin try to kill Ollie in the Queen home but after The Hood is seen at the same time, he relents and apologizes to Moira for the confusion.  Apparently Moira recovered The Queen's Gambit to prove The Well-Dressed Man had Robert Queen killed.    On the island, Ollie was questioned by a man named Edward Fyers.  Deathstroke was the one responsible for torturing Ollie and giving him the scars that cover 20% of his body.  The last time Dinah was in Ollie's bedroom before this episode was Halloween 2005.  Laurel wore a costume with "horrible fishnets", which Ollie thought looked good.  Ollie is capable of controlling his body to the point where he can fool a polygraph almost perfectly.  Walter Steele leaves Moira to go on an extended business trip, nominally to inspect foreign holdings but clearly wanting some time away from the wife he can no longer trust.  Quentin Lance is seen overindulging in drink and there is some suggestion this is not the first time (alcoholic since wife left him?)

Averted with style.  It turns out that last week's blunder (i.e. Ollie not checking for security cameras) was part of a larger cunning plan to make it seem like Ollie and The Hood couldn't possibly be the same person, despite their both appearing in Starling City at the same time.

Easily the most powerful episode of the series so far..  The story works on multiple levels, with parallels being drawn between Ollie's dependence on lies and deception separating himself from his family, whom are all equally dependent on lies and deception to function to one degree or another.  We also see the ways Ollie's lies are hurting others, as the actions of his past and present drive Detective Lance to drink and encourage Laurel's codependence.  Ollie may call himself the damaged one but he is far from alone.