Whither Constantine? - My Thoughts On The Hellblazer Cancellation 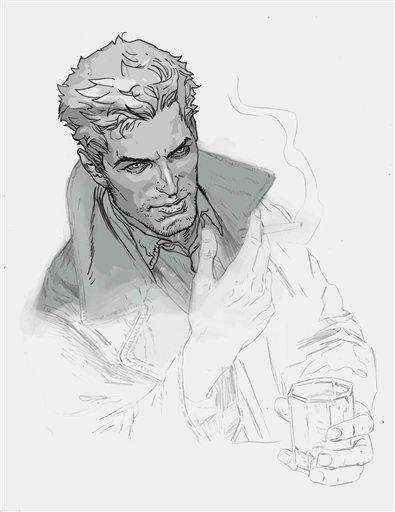 Am I upset?  Yes, but it's the same, muted sadness you get when an elderly relative who has been dying a slow death of cancer finally passes on.  You've already seen the worst and accepted the inevitable, so there's nothing left but the moving on.

I've already been accused of being a heartless bastard and a DC Comics apologist once over this point.  So really, there's no harm in my refuting all the whining I've seen over this point this morning.

They're replacing it with a PG version!

As of this afternoon, the only person I've seen saying this is Warren Ellis.  And unless there was a revolution I missed this morning, Warren Ellis is not in charge at DC Comics or Vertigo.

If Constantine is part of the New 52 line, that means it will be a PG-13 equivalent, at worst.  I think it far more likely Constantine will be a T+ title aimed at 16 years old and up.  Which, I will say as a librarian and comics fan of some years, is probably the age at which most comics fans start reading Vertigo titles.  No less a luminary than Andy Diggle said he first read a John Constantine title at the age of 15.

They can't possibly do the same things in a New 52 title that they could with a Vertigo one!

This point is true in one respect.  They'll probably have to bleep out the swearing and cut the nudity.  But if that's what you're reading Hellblazer for, let me blow your mind - you can see real tits, asses and dicks for free on the Internet EVERYWHERE!   Those of us who just want to read a story about a smart-arse, lower-class mage dealing with magical weirdness can imagine what is happening just off-panel just fine.

Seriously, Animal Man and Swamp Thing are a part of the New 52.  And they're just as disturbing and messed-up as ever.  I think John will be fine, particuarly with a writer like Robert Venditti at the helm.

How Can They Cancel It?  It's The Flagship Title Of Vertigo Comics!

Perhaps in the minds of British comic fans, Vertigo = Hellblazer.  As an American who worked in the comic-selling business, I can confidentially say that Fables has been ruling the roost at Vertigo for some time now and that most long-time comic fans are more likely to name Sandman as the title that defined Vertigo Comics rather than Hellblazer.   In all honesty, the Vertigo shared universe hasn't really existed outside the pages of Hellblazer since Lucifer came to an end.   In recent years, Vertigo has been more of a creator-owned imprint than an adults-only line.  And with DC Comics' new ratings system, having an entire adults-only-only line isn't quite as neccesary as it once was.

It's Disrespectful To The Rich History Of The Character To End The Book!

In my opinion, the legacy of John Constantine has been disrespected for a while now. And judging by the most recent sales figures on Hellblazer, most of his fans agree.  The sales have been dropping steadily for a while now.

To put the above numbers in perspective, the last issue of the recently canceled Resurrection Man sold 16,672 copies. Even at it's lowest, it was still selling just over 13,000 a month.  It's honestly a miracle Hellblazer has been allowed to go on so long as it has.

I personally stopped reading the book back in October of 2009, precisely because I thought Peter Milligan was ignoring the rich history of the character so that he could promote his own love interest for John and do whatever the hell he wanted with the rules of magic in John's universe.  Besides that, John stopped aging and should- by all rights - be looking 70 years old if the plan to age him in real time meant anything anymore.  At this point, closing out the door on this version of John is a mercy killing.