It was inevitable, in the face of the blockbuster success of The Avengers movie, that every character in that movie who did not already have their own comic would get one.  This presented a unique set of problems for Hawkeye.  For all of the things The Avengers movie managed well, their treatment of Hawkeye was not one of them.  He didn't have much chance for character development compared to the rest of the ensemble cast.  And what little development he received didn't develop him past the level of generic bad-ass.

While this fit the Ultimate version of the character well enough, it did a disservice to original Hawkeye.  The Clint Barton who was raised by carnies, trained as a thief and was far too undisciplined and disrespectful of authority in general to ever cut the mustard in a military organization like SHIELD.  The Clint Barton who was a good guy but was also a smart-ass, a risk-taker and very much a non-generic bad-ass.

How then do we reconcile the two versions of this hero, when The Powers That Be at Marvel are pushing the Ultimates versions of the characters as much as possible in the popular media and the Ultimate Universe, in the comics at least, is largely played out?  If you're Matt Fraction, the answer is obvious - you write the best damn Green Arrow comic ever!

Hawkeye was recommended to me as "the best Green Arrow comic in years".  And that's as fair a summary of it as I can think of.  The hero we see here is less like Clint Barton and more like Oliver Queen as written by Kevin Smith.  That proves to be a pretty good character choice, as this book is something that's been all too rare in the Marvel Universe in recent years - fun.

Even the opening scrawl at the start of each issue is humorous, admonishing the reader by Issue 3, asking them why they are continuing to read the book's introductory concept when it hasn't changed.  Clint Barton a.k.a. Hawkeye became the greatest sharp-shooter known to man.  He then joined The Avengers.  This is what he does when he's not being an Avenger.  And what is it that he does?  Be awesome! 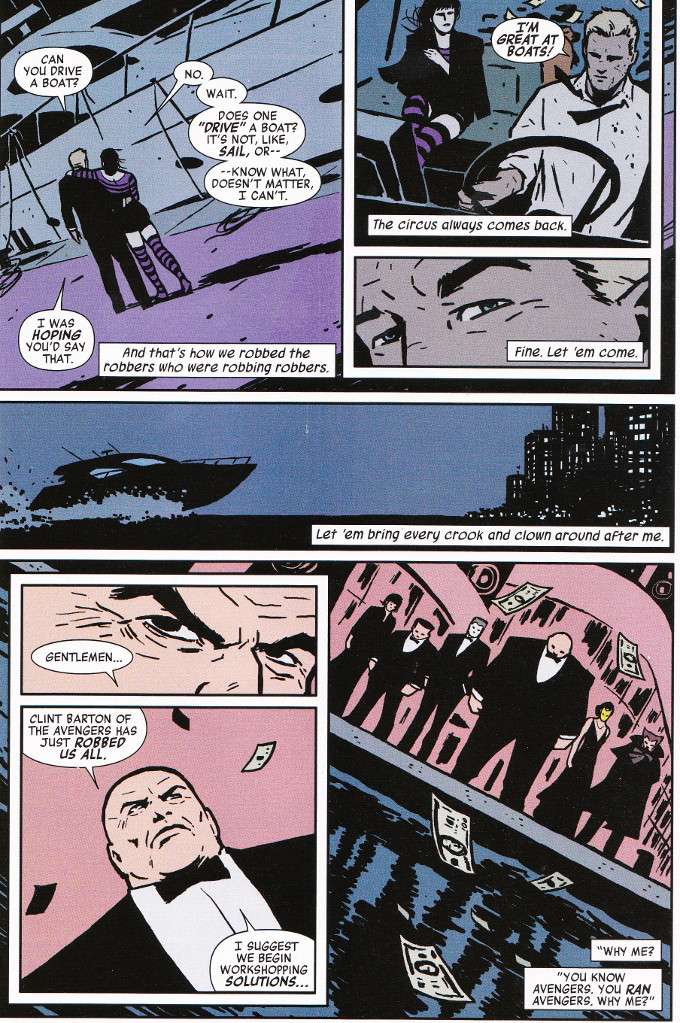 The first issue introduces Clint as something of a social-crusader, as he goes up against the Russian mobsters who own his apartment complex when they elect to evict everyone in the neighborhood.  The second issue gives Clint a sidekick in the form of Kate Bishop (a.k.a. the young lady Hawkeye from Young Avengers) and ends with him having thwarted a robbery by the revamped Circus of Crime (which has more of a Cirque Du Soleil feel to it now) by stealing the money they already stole, which belonged to several criminal scumbags.  The third issue details a typical day for Clint and all the complications that arise as he tries to get his gear organized, get some Scotch-tape, get a car, get laid and not get killed - not necessarily in that order. 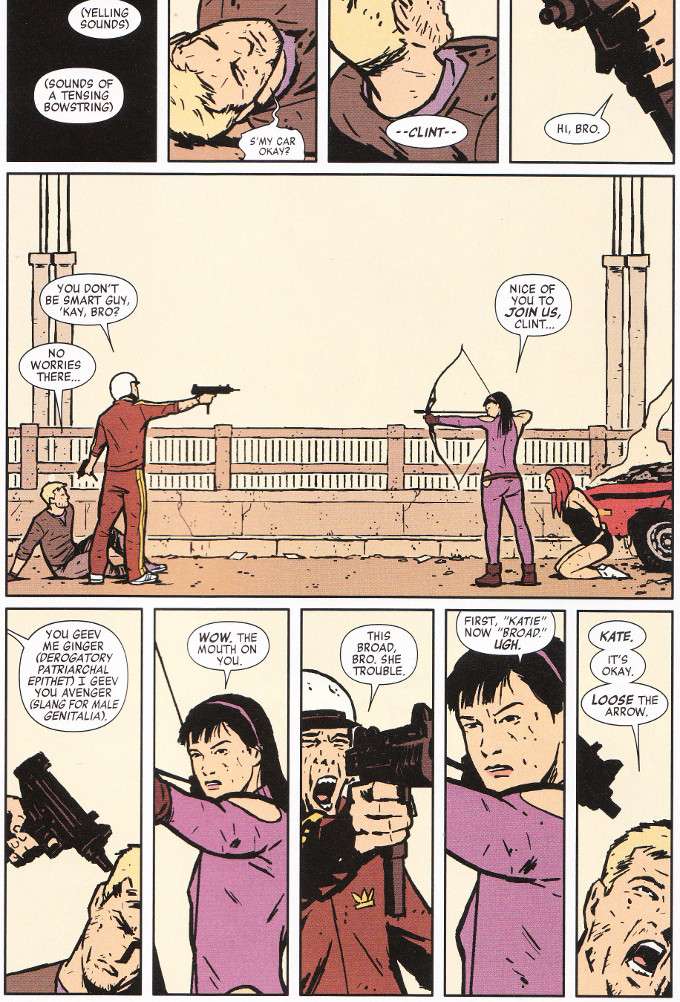 All of this is amazingly illustrated by David Aja and Matt Hollingsworth.  Aja's pencils are reminiscent of Alex Maleev's work on Daredevil but cleaner and less heavily inked as befits a brighter, more cheerful title like this.  Hollingsworth's palette further enhances the art, rendering everything in muted pastels for the most part, save for the shockingly vivid purple that both Clint and Kate favor in their clothing.

I'm not sure how the old-school Hawkeye fans will feel about this title but as a comics-reader in general, I liked it.  Fraction does a perfect job balancing the humor and the action.  The artwork perfectly matches the feel and attitude of the book.  All in all, it's a fun little read.  I'd recommend it to anybody who enjoys high adventure, stories about down-to-earth superheroes and anyone with a twisted sense of humor.
Posted by Starman at 12:01 AM